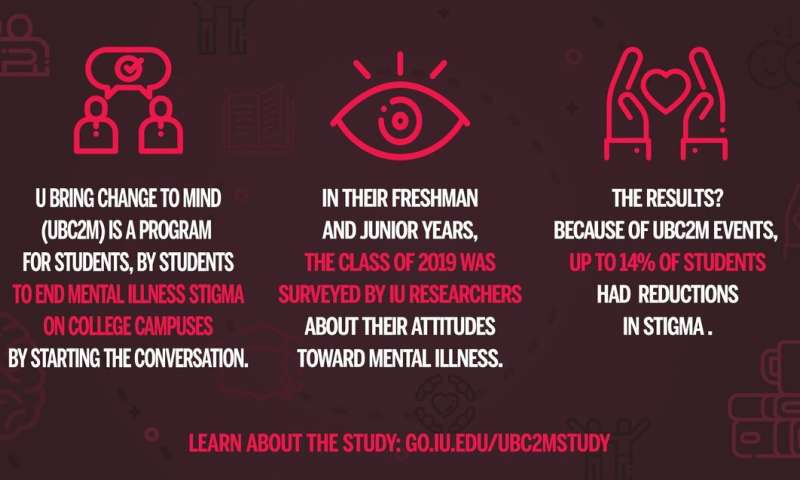 College students who participate in fun, peer-directed activities that openly and honestly address mental illness are significantly less likely to stigmatize people with these conditions, according to a new study led by researchers at Indiana University.

The work, published online in the Journal of the American Academy of Child and Adolescent Psychiatry, is the first study to systematically survey a single graduating class over the course of their college careers on attitudes toward people with mental illness in conjunction with a sustained campaign on the topic. The study was led by Bernice Pescosolido, IU Distinguished Professor of Sociology and director of the Indiana Consortium for Mental Health Services Research.

Specifically, the study examined the effectiveness of U Bring Change to Mind, a part of Bring Change to Mind, a national nonprofit focused on reducing the stigma associated with mental illness led by actress Glenn Close, whose sister and nephew live with mental illness. The researchers measured shifts in student attitudes over time though surveys in their freshman and junior years.

“This is really the first program to target stigma that’s been scientifically vetted from its inception,” said Pescosolido, whose team worked closely in collaboration with university leaders to implement a four-year anti-stigma campaign at IU. “This pre- and post-analysis is very unique. Moreover, the results show these efforts really did change campus climate … not only regarding attitudes but also behaviors.”

The need to address mental illness on college campuses is great and continues to grow, Pescosolido said. According to a 2018 report based on data from nearly 200 college campuses, the percentage of students seeking mental health treatment between 2007 and 2017 rose from 19 to 34 percent, and the percentage of those with mental illness diagnoses rose from 22 to 36 percent. Because counseling services must focus their efforts on the most serious cases due to limited resources, Pescosolido said a need remains for other efforts that instead focus on improving the general campus climate around mental health. 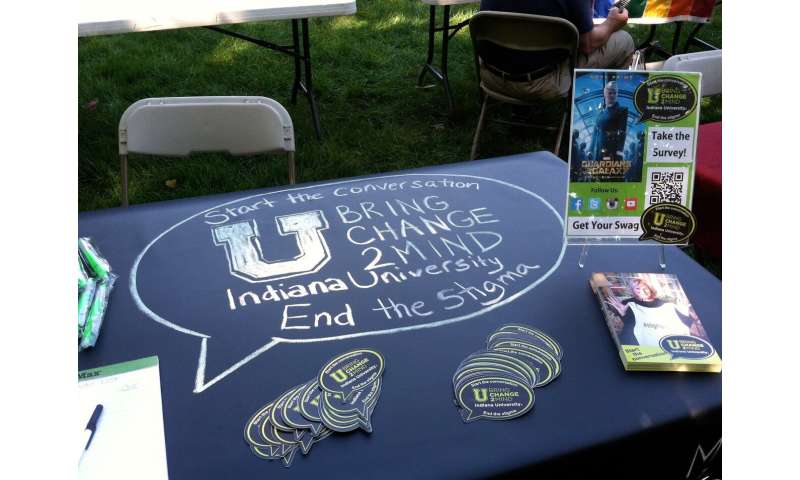 Overall, the IU study found significant reductions in stigma in 11 to 14 percent of students, with the most change reported by those who participated in four or more activities sponsored by U Bring Change to Mind. This included serious events, such as a suicide awareness walk, and lighter activities, such as a scavenger hunt and escape room. These changes included reductions in prejudice toward people with mental illness—both in college and in general—as well as reduced likelihood of distancing themselves socially from people with mental illnesses.

To put these numbers in context, the study’s authors said this represents a rate of change nearly five times greater than that produced by a national-level campaign to reduce stigma in the U.K. over the course of 10 years.

“When you look at most interventions, the numbers are very small,” Pescosolido said. “This study suggests that students really are at the right moment in their lives for this sort of intervention to make a difference.”

The study also suggests that a “tipping point” is needed to drive change since shifts in attitude were strongest in students who attended four or more events. Students who attended one to three events showed relatively small changes in stigmatization toward mental illness.

In addition, the IU study outlines how the U Bring Change to Mind model differs from other campaigns through a focus on open activities with honest discussion of mental illness. The concept draws upon Pescosolido and colleagues’ previous work on reducing mental illness stigma, which found that efforts focusing on the scientific understanding of mental illness as “a disease like any other” did not lower stigma. 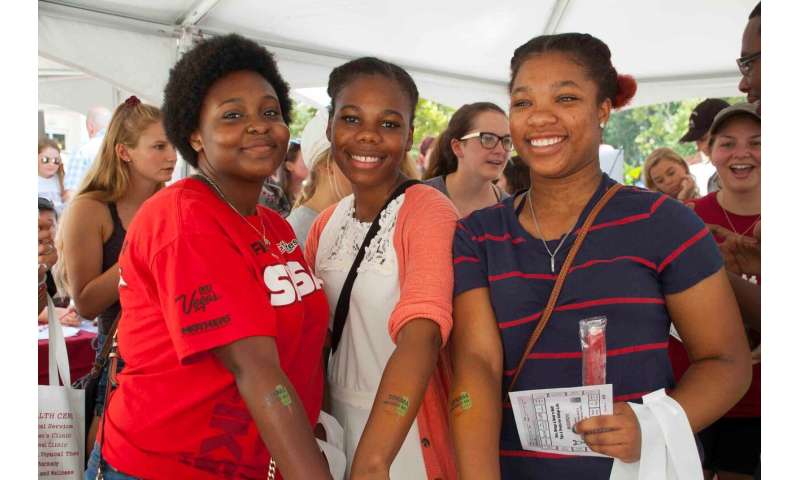 “Those messages didn’t seem to affect whether or not people actually reject or include people with mental illness,” Pescosolido said. “We wanted to create a program based on research that started from a new place—one that draws from Bring Change to Mind’s idea of ending stigma through starting a conversation.”

The five key principles of this approach are: targeting a receptive population, such as college students, at a critical time of change; providing group leaders with needed resources to design relevant messages and organize activities “by students, for students”; avoiding past, ineffective approaches; levering existing resources; and “building in change” to evolve the program over time.

Based on the results, Pescosolido and her team at IU are designing a national and international rollout of the program. Toward this goal, they are seeking partners to assist with logistics so other universities can launch similar efforts or inform existing programs.

“We believe this is the right time for these efforts both because this generation is much more open than past generations—including their thinking about mental health—and because college is when people are really forming critical attitudes that will follow them the rest of their lives,” Pescosolido said. “This is the moment when we can really make a difference.”