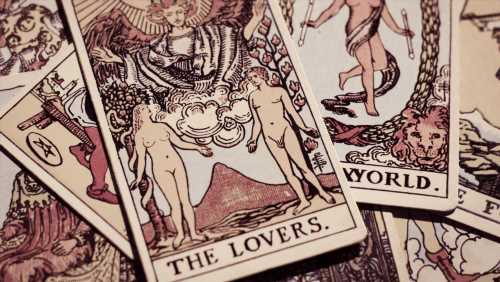 If you ask celebrity tarot card reader, Angie Banicki, who has read cards for Ellen Page, Sophia Bush, Ellen Pompeo, and Usher, she’ll tell you that a tarot card reading isn’t like looking into a crystal ball (via Cosmopolitan). Rather, a reading is simply meant to be a tool to help people better understand themselves.

And if someone has told you that tarot cards are an ancient, Gypsy art, they’re way off the mark. The oldest surviving tarot cards date back to 1440 and belonged to the family of the Duke of Milan. It’s easy to imagine the Italian royal family bored, gossiping, and playing idly with the extravagant cards, decorated with figures inspired by carnival costumes (via Slate). Because the oldest tarot cards were simply that: a deck of cards used to play a form of bridge.

It wasn’t until tarot made its way to France in the 18th and 19th centuries, that the cards were used in similar ways as they are today. But even as French authorities cracked down on tarot card readers as fortune-telling frauds, historians believe that the French used tarot cards to do what modern-day therapy does: come to terms with the struggles of everyday life (via The Conversation).

Tarot cards have nothing to do with the devil

Don’t take it from us. Take it from a witch. Self-proclaimed witch and tarot card expert Siobhan Johnson writes on her website that tarot cards are not tools of the devil. Tarot cards, in and of themselves, are communication devices. Sure, you can try to “call up” the devil using them, but you can also try to contact Cleopatra, Joan of Arc, or the soul of your favorite childhood pet. If you’d like to use them to ask about your future, or to get in touch with your sacred, spiritual self, tarot cards also may help.

You can do any of these things, or use them like they were in Medieval Italy and play a game of bridge. It’s completely up to you. The long and short of it is that learning to read tarot is a bit like learning a new language. There’s no definitive tarot-to-English dictionary, and everyone is going to interpret the cards differently. And you can try to interpret the cards yourself, or leave it to the experts (via NBC).

The death card does not mean you're going to die

No, the card of death does not have a literal meaning — and your odds of seeing this card are pretty slim. Here’s why: In a standard tarot deck, there are 78 cards; for your basic, three-card layout, there’s a four percent chance that this card will surface (via Learn Religions). Even in longer spreads, there isn’t a high probability it will show.

More reassuringly, the card can mean something positive or simply be a note of warning about an impending event. Upright death cards can be symbols of endings, changes, transformations, and transitions. Reversed death cards can be symbols of resistance to change, personal transformations or the need for them (via Biddy Tarot). In other words, per Siobhan Johnson, so-called “bad” cards, including death, are the equivalent of a symbolic heads up. They may be warnings to re-think plans, attitudes, or opinions.

What are some other myths about tarot that you can let go of?  If you’re considering making the leap into the world of tarot, relax. It’s not bad luck to buy your first deck of cards by yourself (via Refinery 29). And when you do buy them, there’s no need to wrap your tarot cards in silk to keep them sacred. Tarot picks up energy from people, not fabrics (via SASI).

High cholesterol: How to naturally lower your levels according to expert
Health News