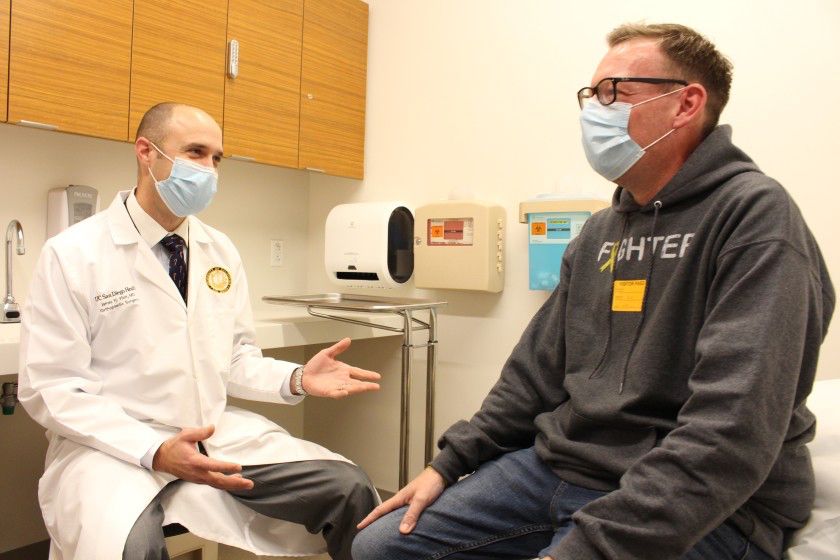 Colin Jackson ran his first mile on July 1, 2014. Not many runners can tell you the exact day they started running, but then again, not many runners are told they have to make intense lifestyle changes or die before their next birthday.

That was more than six years ago. On January 18, 2021, Jackson, 39, completed his 10th marathon, still very much alive, after adjusting to a more healthy lifestyle and beating back a rare form of bone cancer. Running that marathon with him (virtually) was his orthopedic oncologist, Dr. James Flint.

At the beginning of 2014, Jackson went to the doctor because he was having problems breathing, especially while walking up the stairs, and he was sweating significantly. At 6-foot-2 and nearly 300 pounds, Jackson, who then smoked a pack of cigarettes a day, had incredibly high blood pressure, which explained the sweating, he recalled. But it wasn’t even the doctor’s visit that harshly snapped him to reality—it was a visit with a friend later that day, who said, “Yeah, Colin, you’re fat.”

So the Californian focused on changing his diet, cutting out items like soda and ice cream, and eating more nutrient-dense foods. He told friends he would, one day, run a marathon. They laughed.

On July 1 of that year, after losing 50 pounds, Jackson laced up to run one mile to the beach pier in his San Diego neighborhood of Pacific Beach, and one mile home. He made it a half-block before he was bent over, huffing and puffing. Block by block, Jackson moved forward to the fence that would mark one mile, all the while thinking, a marathon may have been a pipe dream.

But 20 minutes and 47 seconds later, Jackson made it to the fence.

“It was one of the toughest things I’ve ever done,” he told Runner’s World. “I sat on the bench and was in tears. Tears from being in pain, and tears from accomplishment and extreme fear.”

Jackson continued to train, and to keep his word to his friends, he signed up for the Rock ‘n’ Roll Arizona Marathon in January 2015. He lined up on race day lighter than he was the year before, but with just a 12-mile long run under his belt. Nonetheless, he quieted the people who told him he couldn’t run a marathon when he crossed the finish line in Phoenix, Arizona, in 5:45:38.

“Ninety-nine percent of people told me I couldn’t do what I just did,” Jackson said. “If I hadn’t made that change in my life, I wouldn’t have made it to that birthday.” 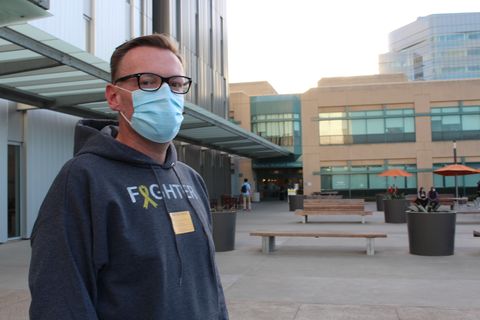 Over the next four years, Jackson completed nine marathons. His 2018 goal was to run three marathons at the back of the pack to help motivate struggling runners. But in June of that year, he was attacked by a stranger, and suffered a skull fracture and an ankle fracture.

When Jackson started running again four months after his attack, he experienced severe pain, which he attributed to the ankle work he had done. The pain persisted for more than a year; doctors told him it was IT band syndrome, but Jackson knew it was more.

“I was in extreme pain,” he said. “I’m a runner. I know pain. But this was getting worse.”

Finally, on August 27, 2019, Jackson was diagnosed with chondrosarcoma, a rare bone cancer; the tumor had engulfed his hip and glute. He underwent surgery in September 2019 to removed the affected parts of his body—part of his femur, part of the hip capsule, and most of the glute muscles that attach to the femur—and to reconstruct those areas.

Flint, who performed the operation, said that this surgery typically doesn’t usually allow people to get back to their pre-surgery activities, particularly marathon running. But Jackson wasn’t shy in telling Flint that he had to keep running.

“Running was my life,” Jackson said. “If it hadn’t been for running, I wouldn’t have changed my life. I wouldn’t have run all these marathons, brought attention to active living, raised thousands of dollars for charities.”

“I’m not in the business of telling people they can’t do things,” Flint told Runner’s World. “Colin is highly motivated and he was determined to get back to everything he was doing before, including running marathons. … I didn’t tell him he couldn’t run a marathon, but I advised him against running a marathon.”

Flint, half-jokingly told Jackson, “If you walk a marathon, I’ll walk it with you.”

That was all Jackson needed to hear. 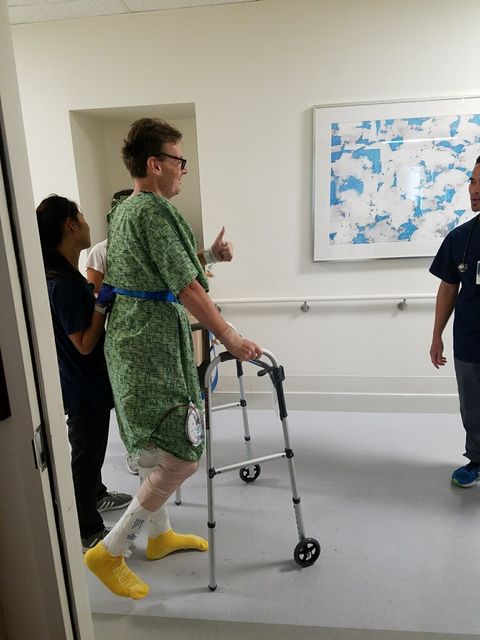 A few months after the surgery, it took Jackson an hour to walk one mile with a walker. With the help of physical therapists, he started to transition to using a cane.

But in March 2020, just as the world was shutting down because of the COVID-19 pandemic, a setback: Jackson was told his cancer was back, this time in his lungs.

“The tumor that was on my hip spread really fast and got really big,” he said of his 2019 diagnosis. “I didn’t want that in my lungs.”

Jackson and his team aggressively treated that tumor with radiation and a chemotherapy pill. In September 2020, just a month after Jackson completed the 5K distance with a cane in just over an hour, he found out his cancer was gone.

Two months later, he walked up a flight of stairs without using a handrail. “That was a huge accomplishment.”

At the end of 2020, the cancer returned for a third time, and this time, Jackson has been treating it with chemotherapy. Jackson received clear scans in March and will continue taking a chemotherapy pill.

With every step forward, every mile his patient logged, Flint came to the realization that he, too, was going to have to cover 26.2 miles. After all, he’d promised Jackson he would.

Jackson’s goal race, the January 2021 Rock ‘n Roll Marathon in Phoenix—which he’d run every year since 2014, except for 2020 when he was recovering from surgery and re-learning how to walk—was canceled due to the COVID-19 pandemic. So he drove from San Diego to Phoenix to walk the route himself, with his family cheering along the way.

Flint wasn’t able to make the trip, but on race morning, back in California, he laced up, too.

“I didn’t train, and I paid for it, of course,” Flint said. “I did the first half marathon and thought, this ain’t so bad, what’s everyone talking about? Well, that second half really spoke to me.” 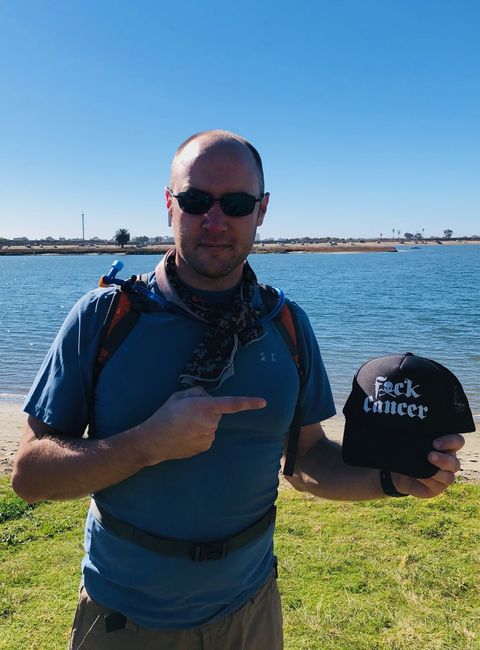 Flint and Jackson exchanged photos and phone calls over the course of their respective marathons. Flint finished in 7 hours and 30 minutes.

“According to Colin, that’s not my last marathon,” Flint said. “I have a new appreciation for marathoners and for my patients. That second loop of pain gave me perspective for what my patients go through and allowed me to pray and contemplate how I can better serve them.”

Five hours after his surgeon crossed his finish line, Jackson, just one day shy of his 39th birthday, completed his 10th marathon in 12 hours, 32 minutes, 32 seconds.

“When I started running marathons in 2015, I completed not one but three marathons,” Jackson said. “In 2021, my first year of prosthesis running, I’ve completed one marathon. It’s not Colin-like to do just one, is it? 2021 is still young.”

What Does It Mean When You’re Always Tired
Health News