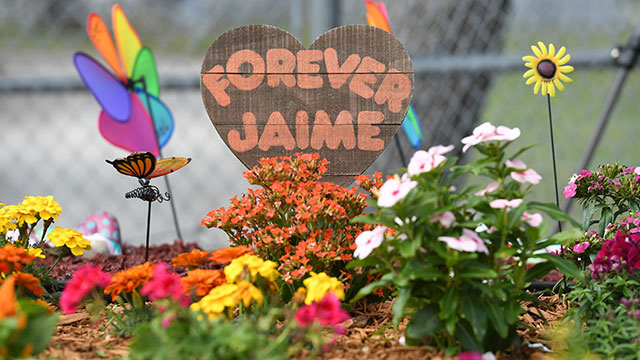 Confession: I try to forget the events of February 14, 2018, on a daily basis — as in, every day that I send my son to school. That’s not fair, since the parents of the kids who died at Marjory Stoneman Douglas High School that day don’t get to forget. The Parkland massacre affects them always, and yet so many of them are also devoting their lives to ending gun violence. So, today, as they remember the 17 lost on that day, we’ll remember too. Here are some of the words the victims’ families and friends shared today.

“Two years ago at approximately 7am, I sent my two children to school. I was so busy rushing them out the door so that they would not be late that my final words were not ‘I love you,” tweeted Fred Guttenberg, now an activist for gun safety (who just got kicked out of the State of the Union last week). “Jesse came home that day. Jaime did not.”

His wife Jennifer shared a collage of photos of Jaime, who was 14 when she died.

“The federal gov’t made the airports safe after 9/11 & federal buildings safe after OK City bombing. Richard Reid tried to light his shoes on fire and now everyone has to take off their shoes,” wrote Max Schachter, father of Alex Schachter, who was also 14. “It’s been 20 years since Columbine it’s time for congress to act.”

“Don’t feel sorry for us or for my son…Feel sorry for yourself if you are not offended by Gun Violence,” Manuel Oliver, father of 17-year-old Joaquin “Guac” Oliver, tweeted. “Don’t take the risk and join Guac’s movement before it’s too late. Shame on anyone that ignores this issue.”

Oliver and his wife, Patricia Padauy-Oliver, have organized a demonstration on the steps of the Lincoln Memorial today. They also created their own chilling gun-violence conversation hearts, using text messages of the victims and survivors during the shooting, to send to the NRA and members of congress this week.

“We will never allow people to forget the loss of our Joaquin and all other victims from gun violence,” she wrote.

The group Stand With Parkland, made up of parents and spouses of the victims, posted photos with quotes about each of the 17 victims on Twitter. Seen together, these mini memorials give us an idea of just how much was lost on a single day.

“She was a National Merit finalist, but unfortunately the letter arrived in the mail the day after she passed, so she never knew that,” a friend of 16-year-old Carmen Schentrup said in one such post. “She was going to change the world, and I’m sure of that. But she doesn’t have the chance now.”

The teachers who died are also represented here. “I am alive today because of him,” a student wrote of geography teacher Scott Beigel, who unlocked his classroom door to let in more students. “If I could see him right now … I’d give him a huge teddy bear to say thank you. But, unfortunately, I can’t do that.”

Many of the surviving MSD students have been active on social media today, too, in particular those who founded the March for Our Lives after the shooting.

Ryan Deitsch was one of many who tweeted the names of all the victims.

“If you don’t do anything else today, please register to vote,” urged David Hogg. “We need new leaders who will protect our nation’s most precious resource, our children.”