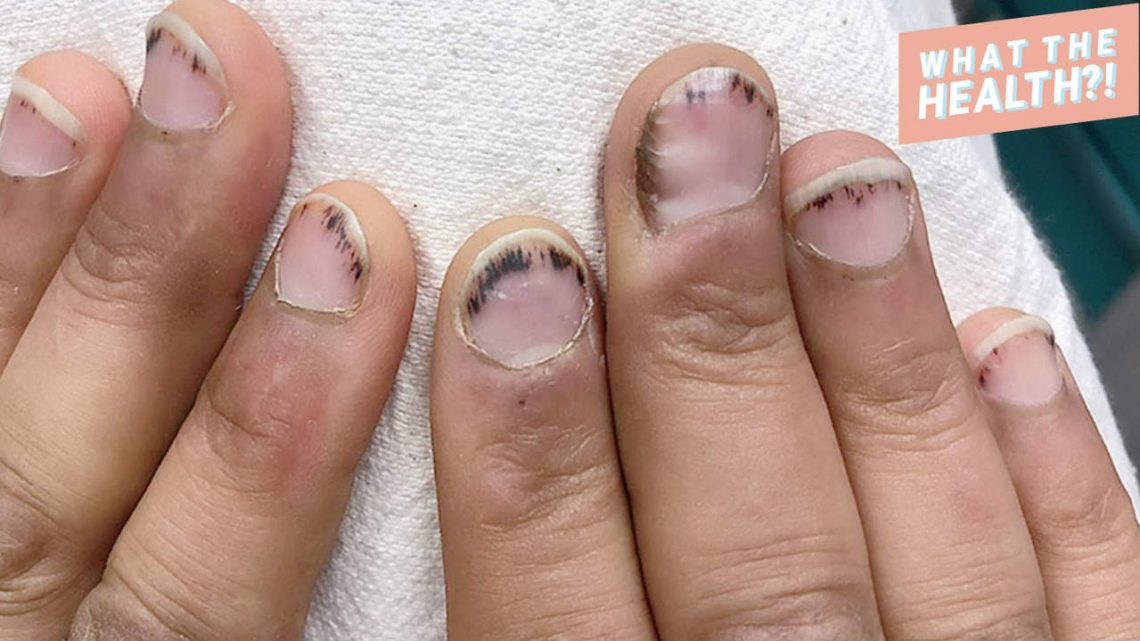 You probably know by now that your nails can tell you much about your health. But did you know they can even signal health problems as serious as an infection of the heart valves?

A photo published by the New England Journal of Medicine brought this to our attention. It features the hands of a 48-year-old male patient who had what are called splinter hemorrhages.

Splinter hemorrhages show up as small dark marks on the nails. According to the NEJM, they  can be a sign of serious health problems—including a condition called endocarditis, which is an infection in the heart chambers and valves. Endocarditis can occur if fungi, bacteria, or other germs enter your body (via your mouth or other opening) and spread to damaged parts of the heart.

But what exactly are splinter hemorrhages? A hemorrhage occurs when blood leaks from a ruptured blood vessel. And splinter hemorrhages are reddish-brown streaks that are one to three millimeters long and appear under a person’s nail plates. “The blood attaches to the nail plate and moves distally as the nail grows,” the American Academy of Family Physicians (AAFP)  explains.

Endocarditis isn’t the only condition associated with splinter hemorrhages. According to a report from JAMA Dermatology, they can also be indicative of hemodialysis, antiphospholipid syndrome (an immune-system problem that can increase the risk of blood clots), and vasculitis.  In about 20% of cases, splinter hemorrhages are caused simply by nail trauma, according to the AAFP.

Splinter hemorrhages can be temporary or long-term: If the blood attaches to the nail plate and not the nail bed, it’ll grow out as the nail grows. But it might remain stationary if it attaches to the nail bed, according to the AAFP. They’re more common for men and people with dark complexions. While splinter hemorrhages usually show up under one’s fingernails, they can also appear under toenails.

Doctors learned that the patient featured in the NEJM report had a type of endocarditis called nonbacterial thrombotic endocarditis. He also had pancreatic cancer, the report noted.

If you do notice splinter hemorrhages popping up under your fingernails after your nails have experienced trauma, remember that the blood could simply be a natural consequence. If you haven’t been in any recent accidents and you notice the lines, though, it could be worth a quick conversation with your doctor to make sure nothing else is going on with your body.

Man Had a Nearly 5-Foot Wire Left in His Body After Heart Procedure, Lawsuit Claims

Heart attack warning: The one thing that could put you at risk of the deadly condition
Health News