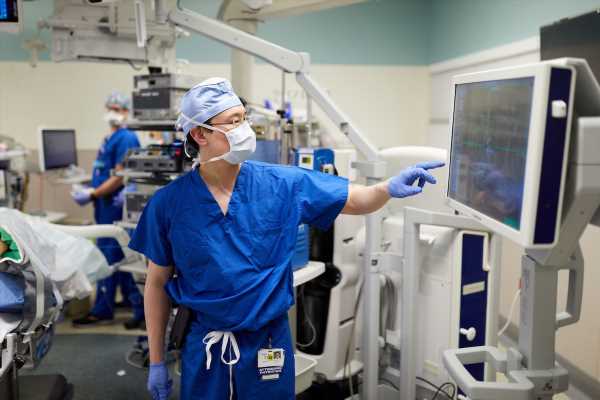 Albert H. Kim, MD, PhD, a professor of neurological surgery at Washington University School of Medicine in St. Louis, has been named the inaugural William H. Danforth Washington University Physician Scholar. He is the first researcher named as part of the School of Medicine’s new Physician-Scientist Investigators Initiative, which aims to recruit and retain elite physician-scientists whose work has already indelibly changed their fields.

Kim is also a professor of genetics, of neurology and of developmental biology at the School of Medicine, and the inaugural director of the Brain Tumor Center at Siteman Cancer Center, based at Barnes-Jewish Hospital and Washington University School of Medicine. Kim’s pioneering research, which has been continuously funded by the National Institutes of Health (NIH) since 2012, has transformed our understanding of one of the deadliest forms of brain cancer, glioblastoma, as well as aggressive benign brain tumors such as meningioma.

“We are excited to launch the Bill Danforth WashU Physician-Scientist Investigator Initiative with the appointment of Dr. Albert Kim, a nationally recognized leader in the biology and treatment  of brain tumors,” said David H. Perlmutter, MD, the George and Carol Bauer Dean of the School of Medicine, executive vice chancellor for medical affairs, and the Spencer T. and Ann W. Olin Distinguished Professor. “WashU has long been home to some of the world’s finest physician-scientists. We continue to believe that the combination of a doctor’s deep knowledge of disease together with the method and potential of science provide a unique niche in advancing our efforts to improve the human condition. This initiative is an expansion, enhancement and differentiation that reflects our long-standing institutional commitment to developing the careers of physician-scientists. Dr. Kim’s impressive accomplishments as both a clinician and a researcher make him a wonderful role model as the first Danforth Physician Scholar.”

The Physician-Scientist Investigator Initiative targets MD and MD/PhD researchers at the associate or full professor rank with an established track record of exceptional research contributions and funding. The School of Medicine has committed $40 million over the next decade to be used as part of highly competitive recruitment and retention packages for such candidates. With seed funding from this commitment, the school’s clinical departments will aim to attract and retain the most talented physician-scientists in the U.S. and abroad.

The initiative was named in honor of William H. Danforth, MD, who served as the 13th chancellor of Washington University from 1971 to 1995. A cardiologist, Danforth joined the School of Medicine faculty in 1957 after completing residencies in medicine and pediatrics at Barnes-Jewish and St. Louis Children’s hospitals, respectively. He rose through the professorial ranks at the School of Medicine before taking on administrative duties as vice chancellor for medical affairs. Along the way he did basic research in the laboratory of Nobel laureates Carl and Gerty Cori. During his chancellorship, Washington University significantly expanded resources for scholarship and scientific discovery, and completed its transition from a local college to a national research university.

“This program is designed to enrich the physician-scientist community here at WashU,” said Wayne M. Yokoyama, MD, the Sam J. Levin and Audrey Loew Levin Professor of Arthritis Research and the associate dean of the Division of Physician-Scientists. “The initiative will help clinical departments across the School of Medicine recruit and retain outstanding, innovative physician-scientists who have already made transformative discoveries and are poised to do even more to advance their fields.”

Kim’s work on glioblastoma has centered on two key areas. First, his laboratory has been identifying the molecular mechanisms required to maintain glioblastoma stem cells, a subpopulation of glioblastoma cells that play a key role in driving resistance to treatment and recurrence. These foundational insights into glioblastoma biology could lead to new therapeutics for this formidable cancer.

Second, Kim’s lab has helped to uncover how a promising new therapy for glioblastoma works and has opened up new avenues to improve its effectiveness. The therapy, known as laser interstitial thermal therapy (LITT), is a minimally invasive technique that uses lasers to treat brain tumors that are hard to reach via conventional therapies. He developed a mouse glioblastoma model of laser therapy that revealed that laser treatment compromises the blood-brain barrier, allowing drugs in the bloodstream to more easily reach brain tumors, and triggers inflammatory and immune mechanisms that potentially could be harnessed to bolster tumor immunotherapies. Alongside this basic research, he helped lead a multicenter clinical trial to assess the most effective use of this emerging therapy.

“Albert is an exceptionally talented brain tumor scientist and a highly gifted clinical neurosurgeon,” said Gregory J. Zipfel, MD, the Ralph G. Dacey Distinguished Professor of Neurological Surgery and head of the Department of Neurosurgery. “As director of the Brain Tumor Center, he leads one of the most dynamic cancer programs at our institution. His work is fundamentally changing the way glioblastoma and other brain tumor patients are managed now and will be managed in the future.”

Kim earned his bachelor’s degree at Harvard University, followed by a master’s degree in biology & biomedical sciences at Washington University School of Medicine and then medical and doctoral degrees at New York University. He completed his neurosurgery residency at Harvard Medical School and its two affiliated hospitals, Brigham and Women’s and Boston Children’s hospitals, before going on to pursue fellowship training in complex skull base and cerebrovascular surgery at the University of Miami Miller School of Medicine. He joined the Washington University faculty in 2011.