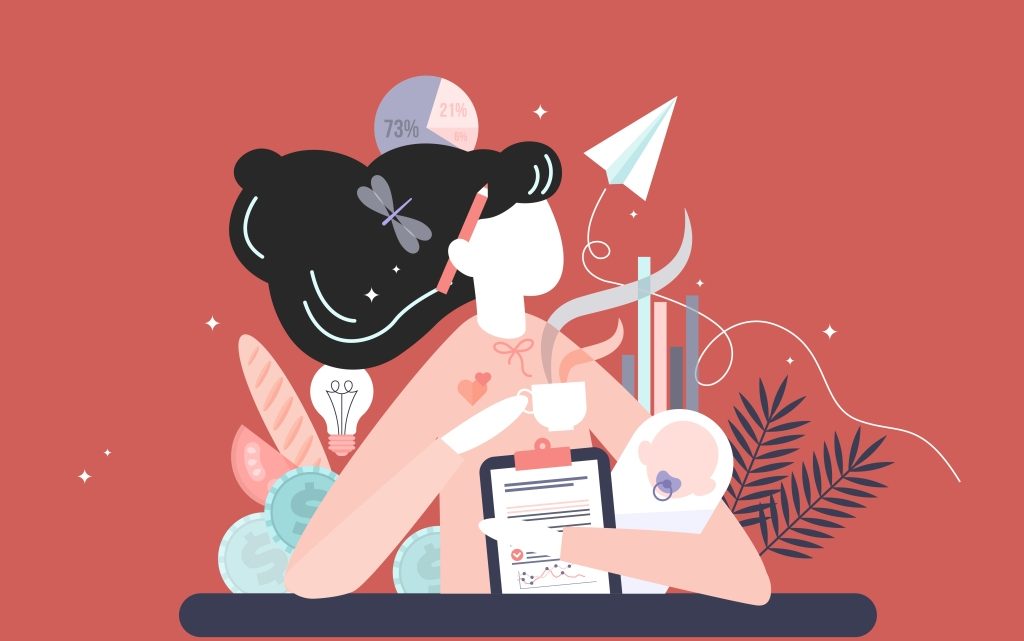 What the Numbers Reveal About Moms in America Right Now

What does it mean to be a mother these days? The answer is unclear. Over the past two years as the pandemic has impacted every aspect of our lives, how we parent has completely transformed. Between quarantining, social distancing, testing, remote learning and working, masking, vaccinating — it’s hard to believe that just 24 months ago, American moms rarely thought about most of this, let alone angrily debated these topics on social media and in school-board meetings.

With more than 850,000 individuals in the U.S. dead from COVID-19 and the health crisis far from over, our nation has been plunged into an extended state of collective loss, grief, uncertainty and fear. That has exacerbated challenges that have long plagued working mothers, such as the dreaded second shift of unpaid housework and caregiving, and the persistent gender wage gap, which is even more pronounced for moms. In many cases, the ongoing instability has caused some moms to give up working entirely.

“In the beginning, as moms always do in a crisis, we were able to hunker down and do a lot more self-sacrificing,” Elizabeth Cohen, a New York-based clinical psychologist and the director of the Center for CBT In New York City, tells SheKnows. “But now moms are telling me, ‘I should be used to it, I should have this all together. Why am I so depressed?’ But we don’t get used to trauma—that would be biologically unhealthy. As people, we have many parts; motherhood is just one. But because of COVID, the other parts of us — the working part, the sensual part, the friendship part — have become so much smaller. Mothering, at least for me, is causing me to fall to my knees at times. Our gas tanks are just empty.”

Not all is gloom and doom, however. Cohen knows some mothers who have found upsides to their upended routines, particularly those who have the privilege of telecommuting. Gaining time from lost commutes, flexible hours and the ability to tackle quick chores like throwing in a load of laundry during the day have helped many achieve more of a work-life balance. Others have used the pandemic upset to pursue new paths, both personally and professionally, spend more time with family, or make bold career moves.

“There’s much more definitiveness,” says Cohen. “In some ways, moms have become more assertive of their needs because so many people require things of us,” she adds. “I think we are building resilience as mothers about what we can and can’t control.”

However, Cohen cautions, class, race and vocation are significant factors in the reimagining of motherhood today. For moms who are essential workers, or don’t have adequate childcare, or are food or housing insecure, or have lost loved ones, the pandemic has been markedly harder. “When we don’t have paid time off to rest and rejuvenate, we can’t rebound from trauma,” Cohen says. “As a society, we do a terrible disservice to moms saying, ‘Just suck it up.’ We haven’t had a break.”

Here’s a quick glimpse of motherhood by the numbers.

According to an October 2020 Pew Research Center survey, 27 percent of mothers with kids under 18 did not want to work for pay, up from 19 percent in 2019. Even more striking: The share of mothers who said they preferred to be employed full time dropped from 51 percent to 44 percent. Additional childcare duties for mothers seemed to play a role in this trend, considering the numbers for fathers stayed pretty much the same.

Working Moms Are Struggling with Childcare

While working mothers and fathers agreed that, as the pandemic went on, fulfilling childcare duties became more difficult (52 percent, up from 38 percent in 2020), a larger share of moms (57 percent) than dads (47 percent) felt that way, according to a January 2021 Pew Research Center survey.

While an October 2020 Pew Research Center survey found that the percentage of mothers and fathers who stopped working during the pandemic was roughly comparable (for moms, it was 63.4 percent, down from 69 percent and for dads, it was 85.6 percent down from 90.5 percent), the share of working single moms fell significantly, as reflected in a November 2020 Pew Research Center survey: 67.4 percent of single mothers of kids under 18 were working compared with 76.1 percent in September 2019.

Many Employed Moms Are Suffering Burnout

According to December 2020 research by Great Place to Work and the healthcare company Maven, working moms were 28 percent more likely to experience exhaustion than fathers, with Black, Asian and Latinx mothers the most affected.

To be fair, pretty much everyone’s mental health has suffered during the pandemic. However, according to the American Psychological Association’s March 2021 Stress in America, a larger share of mothers (39 percent) than fathers (25 percent) said their mental health has worsened. But moms may just be asking for help: The same report finds that more fathers (82 percent) said they wished they had more emotional support than mothers (68 percent).

Juliana Menasce Horowitz, the associate director for demographics and social trends research at the Pew Research Center says that none of these issues are new, they’ve just intensified during the pandemic. “We’ve been looking at the challenges of working moms for a long time,” Horowitz tells SheKnows, noting that most of these studies were conducted in 2020 and early 2021, which means they may not reflect where mothers are today. “As a researcher, it’s challenging,” she says. “We were about to update some of the work we’ve done on who’s working from home and thought that January 2022 would be a time when people were going back to their workplaces. Just when you think it’s the right time to ask something, the world changes around you!”

Even with the omicron surge delaying a return to normal (or even a new normal!), there is hope for mothers in 2022. For the most part, kids are back in full-time school, and some employers are allowing parents to continue working from home, which has benefits. These surveys today would likely yield different results, and the havoc of the pandemic has inspired many moms to reassess their priorities.

“Mothers are in desperate need of being seen and heard and validated,” says Cohen. “We are seeing and learning about parts of ourselves we’ve never had to before.”

Check out these celebrity moms who battled postpartum depression.