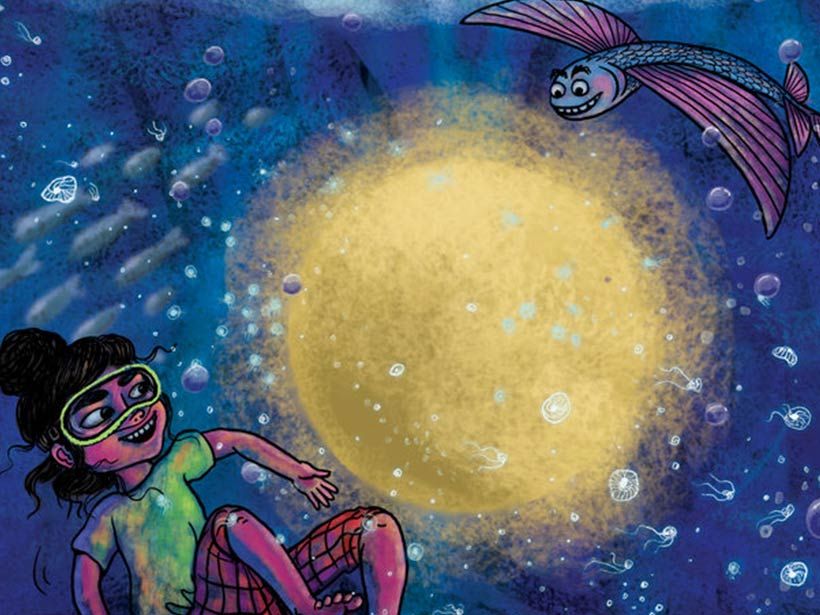 Diwali 2018: When the moon doesn’t rise from the sea one night, it is up to Maisha and her friend Uchli the flying fish to find her. But how can they look for the moon without any light? During this festival of lights, read aloud this story with your children and introduce them to glowing marine life underwater.

Late one night, when her Amma and Achan are fast asleep, Maisha grabs her goggles and sneaks out of the house.

Maisha loves the beach at night. And one of her best friends lives in the sea.

Maisha goes to their usual meeting place on the beach and calls out.

She can sit here for hours, watching Uchli fly in and out of the water. Uchli is a flying fish who loves to show off his tricks.

“What’s the matter?” Maisha asks. “Why do you look so upset?”

The moon! Uchli is right—their friend is not in the sky tonight. In fact, there’s a big hole where the moon should be.

“But we saw her just last night,” Maisha exclaims. “She rose from the sea right here in front of us… Do you think she’s lost underwater?”

“We have to find her!” Uchli says.

“But how will we see anything without the moonlight?” Maisha asks.

Just then, Uchli notices something in the water.

Every time a wave breaks in the distance, little sparks of light glow and fade and glow again.

“Maisha!” he shouts, excited. “I have an idea! Get on my back, let’s go to those waves over there.”

When they reach the lights, Maisha takes a deep breath, holds Uchli tightly and . . .

Maisha gasps. She feels like she’s floating in a sky full of stars! There are tiny creatures glowing all around her.

“Wow, who are they?” she whispers to Uchli.

“They’re plankton. Maybe they can help light our way in the sea!” Uchli says.

“Will you share your light with us?” Maisha asks one of them. “The moon is missing, and we need some light to find her.”

“You will need more than just my light,” the plankton says. “Let me ask my friends if they can help too!”

Soon, Maisha and Uchli are joined by an army of little creatures, with their flickering lights.

“Now where can the moon be?” Maisha wonders.

“I can help you,” a deep, booming voice says, near Maisha’s ear.

She spins around. The eight arms of a firefly squid glimmer back at her. His body is covered in neon-blue lights.

“I saw the moon go this way just a little while ago.”

At first, Maisha is scared of the long tentacles. But she knows the firefly squid’s light can help them see better underwater.

The squid wraps a tentacle around Maisha’s finger. “Hold on tight!”

Then Maisha, Uchli, the glowing plankton and the firefly squid all swim down together.

Down, down, down they go where to the water is very dark. But the plankton glow brighter, and the squid flashes his light.

There is still no moon in sight.

Then they meet an anglerfish, out on a hunt. She has sharp teeth, but Maisha is not scared any more.

“Hello,” she says. “We’re looking for the moon. Have you seen her around?”

“Yes,” says the anglerfish. “I saw her swimming with some moonfish a few hours ago. Follow me!”

Maisha, Uchli, the squid and the plankton follow the green lure of the anglerfish.

The light from the glowing animals falls like a spotlight on the dark ocean floor.

Suddenly, Maisha sees something bright under a rock.

The squid lifts the rock with his tentacles.

“Hurrah!” everyone shouts, as the pale moon slips out.

“I came here to meet my cousins, the moonfish,” says the moon. “I got lost on my way back when my light began to fade. And then I got stuck under this rock. Thank you for coming to find me.”

“So this is where you are when you’re not in the sky!” Maisha says.

The moon smiles and begins to float up towards the surface.

Finally, she jumps into the sky.

Uchli and Maisha wave goodbye to their new friends and swim back to the beach in the moonlight.

The stars under the sea continue to shine deep into the night.

Did you know that many animals, both above and under water, are able to make their own light?

The tiny plankton that Maisha and Uchli meet glow to scare away the animals that might eat them. When they sense movement in the water, the plankton let out bright sparks as a warning. Sometimes, waves and boat traffic also trigger this light.

While plankton animals have a chemical in them that helps them glow, the firefly squid has special organs called photophores that produce its light. Thousands of these light-producing photophores on the squid’s body flash to attract food, impress a mate or confuse predators.

The lures of anglerfish get their light from the glowing bacteria that live inside them.

Many plants and animals glow above the water too. Fireflies, some mushrooms, and even you emit a tiny amount of light every day!