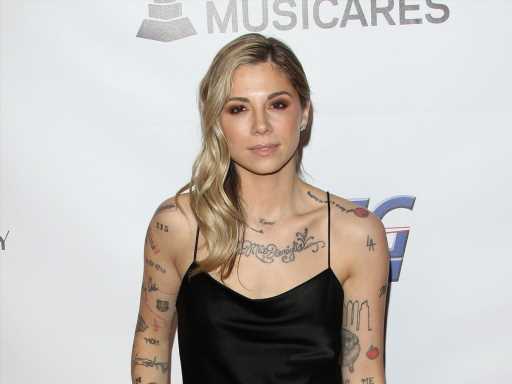 One year ago, Christina Perri shared the devastating news that her daughter was stillborn, sharing that she lost her after 33 weeks amid complications for both Perri and her baby. The loss was magnified after believing their stillborn daughter would be a rainbow baby for her and her husband, comedian Paul Costabile, after they experienced a pregnancy loss at 11 weeks in January of that same year.

Now, Perri is honoring the baby they lost, whom they’ve named Rosie, by releasing an album of lullabies. Perri released the album, called Songs for Rosie, on November 24 — the anniversary of the day Rosie died, telling Self why now is the right moment for her to share her family’s loss… and why music is the perfect medium to honor their late baby girl.

The singer-songwriter, who shares daughter Carmella with Costabile, explained why she’s ready to open up about her loss now. “I have done so much work to be able to talk about it. I feel not just ready to talk about it — I want to. I want to be that voice,” she said.

She shares that she always planned to honor Rosie through music, a missive that became even more important after losing her. “This record means the most to me because it carries forever the narrative — the correct narrative — that she exists,” she shared of the album, which is preceded by her 2019 album, Songs for Carmella.

“I have Songs for Carmella, and this is the same album cover. It uses the same font. It’s the second volume. Because Rosie is my daughter. And she will remain part of our family forever,” the “Jar of Hearts” singer told Self.

She hopes the album will help others who have also experienced pregnancy loss connect with their grief and honor the little ones they’ve lost as well. “They say when someone passes away, say their name because you don’t want to lose their memory…. That’s also why I made Songs for Rosie. My heart is broken, but I’m honoring her.”

Perri shared one of the most unexpectedly challenging parts of losing her pregnancy. “My body was truly, truly broken,” she said. “One of the hardest parts was having the postpartum body without the baby. Looking like I just had a baby, and not having the baby. I actually would get mad when I looked at myself. It was a reminder, every time, of not having her.”

As for what helped her to begin the process of healing, she credits adopting a foster puppy, yoga sessions, and “a lot of therapy: regular therapy, trauma therapy, couples therapy. I really just did the most I could possibly do,” she added.

She also credits a decade-long sobriety journey and connecting with other parents who had lost babies for helping her through such an unimaginable pain. “It’s a club nobody wants to be a part of, but the women in that club are phenomenal. Their love, and understanding, and compassion, and feeling like I wasn’t alone was a huge part of [my healing]. When we lost Rosie, I feel like it broke the hearts of everyone that knows me,” she said, “And in pain, sometimes we really feel connected.”

Childbirth is nothing like in the movies, as these beautiful photos show.