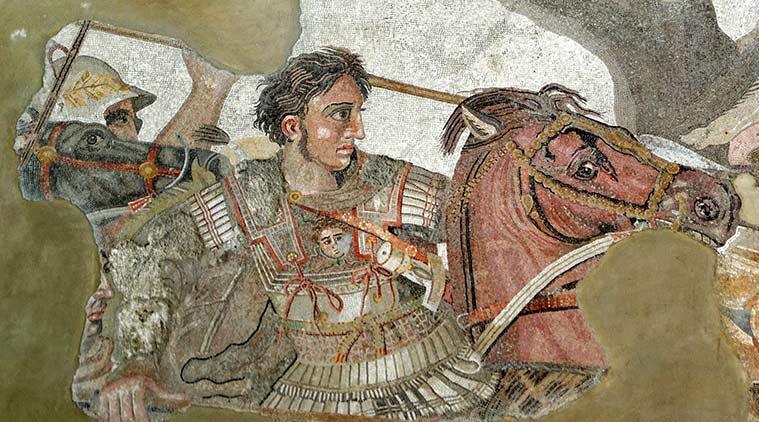 Alexander the Great vs the Morose Monks in India

In yet another colourful encounter, 10 gymnosophists (the Greek word for Jains!) were captured and brought to Taxila. Since they had a reputation for cleverness and wit, Alexander thought to play a game with them. He declared that he would ask each of them a question, and put to death the one who had the worst answer.

(This is part of the series Make History Fun Again, where the writers introduce historical facts, events and personalities in a fun way for parents to start a conversation with their kids.)

The unbeaten young conquerer, Alexander the Great, really wanted to conquer India, for like all ancient Greeks, he too believed that India was at the edge of the world, and only a great ocean lay beyond it! He also wanted to best the godly Dionysus and Hercules, who had conquered India in Greek mythology.

In 327 AD, after some hard battles, Alexander did manage to conquer the northwestern bit of the Indian subcontinent, before his soldiers revolted and refused to cross the Beas river where the Nanda king’s 6,000 fighting elephants, 80,000 horsemen, 200,000 foot soldiers and 8,000 chariots waited to greet them in style.

Alexander had to regretfully turn back home, but during his short time in India, he came across many Indian philosophers who were quite irreverent towards him!

Alexander vs the Fearless Fakirs

He once came across some Indian sages in a meadow who were discussing philosophy. When these sages saw Alexander and his army, their only reaction was to stamp their feet loudly on the ground. When asked what they meant by this odd behaviour, they replied, ‘‘King Alexander, every man can possess only so much of the earth’s surface as this we are standing on. You are human like the rest of us, except you are always busy and up to no good, travelling so many miles from your home, a nuisance to yourself and to others. Ah well! You will soon be dead, and then you will own just as much of this earth as needed to bury you.”

Alexander vs the Morose Monk

Another time, Alexander came across a sect of Indian philosophers whose practice it was to go naked. Alexander was an admirer of their powers of endurance and really wanted them to go live with him. Their elderly leader Dandamis absolutely forbade his disciples from accepting this offer.

Alexander tried threats and bribes and boasts, but Dandamis was immune to all.  He in fact scolded the conquerer,  “If you, my lord, are the son of god, why, so am I. I want nothing from you, for what I have is enough for me. Moreover, the men you lead get no benefits from their worldwide wandering over land and sea, and their many travels are endless. I desire nothing that you can give me; I fear no exclusion from any blessings which may perhaps be yours. This land, with the fruits of her soil, is enough for me while I live; and when I die, I shall be rid of my poor body – my unseemly housemate.”

These words convinced Alexander that Dandamis was, in a true sense, a free man and so he made no attempt to compel him or hold him captive.

Alexander vs the Jesting Jains

In yet another colourful encounter, 10 gymnosophists (the Greek word for Jains!) were captured and brought to Taxila. Since they had a reputation for cleverness and wit, Alexander thought to play a game with them. He declared that he would ask each of them a question, and put to death the one who had the worst answer. The oldest man in the group was appointed judge. There followed a question and answer session most inane.

The first philosopher was asked, “Which are more numerous, the living or the dead?” to which he replied “The living, for the dead do not exist any longer.”

The second man was quizzed, “Which breeds the larger animals, the sea or the land?” Pat came the reply, “The land, for the sea is only a part of land.”

The third, upon being asked “Which is the cleverest of beasts?” cautioned, “That one with which man is not yet acquainted.”

Another among them was queried, “Which existed first, the day or the night?” and replied, amusingly, “The day was first…by one day.” This reply caused Alexander to betray surprise and the philosopher added “Impossible questions require impossible answers.”

Alexander wisely ignored this mockery and decided to move on to the next question, “How may a man make himself beloved?”, and the next man replied wisely, “A man will be beloved if, possessed with great power, he still does not make himself feared.”

Moving on to Alexander’s favourite topic, the elevation of a man (one man, him!) to godhood, he asked “How may a man become a god?” and got the unimpressed reply, “By doing that which it is impossible for a man to do.”

The next sage was asked, “Which is stronger, life or death?” and replied, “Life, because it has to bear so many evils.”

Moving to the last philosopher, he queried “How long should a man live?” to which he received the answer, “As long as he does not think it is better to die than to live.”

Turning to the judge, Alexander ordered him to pass sentence. The old man said, “In my opinion, each has answered worse than the other.” A fed-up Alexander said in annoyance, “Then you shall die first for giving such a sentence,” Unfazed, the old sage said “Not so, O king, unless you said falsely that he should die first who made the worst answer!”

At this, Alexander was so amused at the cleverness of these philosophers that he gave them a great many presents, and sent them away freely.

(For more fun journeys through India’s history, check out the newly released two-volume set, The History of India for Children Vol. 1 and Vol. 2, published by Hachette India, which is now available online and in bookstores across the country.)