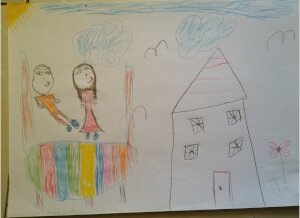 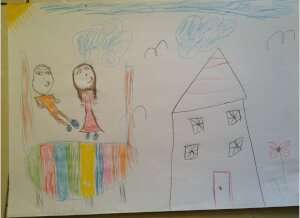 The sibling relationship is the longest most people will enjoy in their lifetimes and is central to the everyday lives of children. A new Tel Aviv University and University of Haifa study finds that relationships between children and their siblings with intellectual disabilities are more positive than those between typically developing siblings.

The research examines the relationships of typically developing children with siblings with and without intellectual disabilities through artwork and questionnaires. It was conducted by Prof. Anat Zaidman-Zait of the Department of School Counseling and Special Education at TAU’s Constantiner School of Education and Dr. Dafna Regev and Miri Yechezkiely of the University of Haifa’s Graduate School of Creative Art Therapies. The study was recently published in Research in Developmental Disabilities.

“Having a child with a disability in a family places unique demands on all family members, including typically developing siblings,” Prof. Zaidman-Zait explains. “Although challenges exist, they are often accompanied by both short- and long-term positive contributions.

“Through our research, we found that relationships among children with siblings with intellectual disabilities were even more supportive than those among typically developed siblings. Specifically, we found that children with siblings with intellectual disabilities scored higher on empathy, teaching and closeness and scored lower on conflict and rivalry than those with typically developing siblings.”

“But these studies did little to tap into the inner worlds of children, which really can only be accessed through self-expression in the form of art or self-reporting, independent of parental intervention, which is the route we took in our study,” Prof. Zaidman-Zait says.

“We drew on the basic assumption that artistic creation allows internal content to be expressed visually and that children’s self-reports have special added value in studies measuring sibling relationship qualities, especially in areas where parents might have less insight,” Prof. Zaidman-Zait says.

Both sets of typically developing children, with and without siblings with intellectual disabilities, were asked to draw themselves and their siblings. Licensed art therapists then used several set criteria to “score” the illustrations: the physical distance between the figures; the presence or absence of a parent in the illustration; the amount of detail invested in either the self-portrait or the sibling representation; and the amount of support given to a sibling in the picture. The children were then asked to complete the Sibling Relationship Questionnaire, which assessed the feelings of closeness, dominance, conflict and rivalry they felt for their siblings.

Reviewing the children’s illustrations and questionnaires, as well as the questionnaires completed by the children’s mothers, the researchers found that the children with siblings with intellectual disabilities scored significantly higher on empathy, teaching and closeness in their sibling relationship and scored lower on conflict and rivalry in the relationships than those with typically developing siblings.

“Our study makes a valuable contribution to the literature by using an art-based data gathering task to shed new light on the unique aspects of the relationships of children with siblings with intellectual disabilities that are not revealed in verbal reports,” Prof. Zaidman-Zait concludes. “We can argue that having a family member with a disability makes the rest of the family, including typically developing children, more attentive to the needs of others.”

Physicians spend 16 minutes per visit on electronic health records use