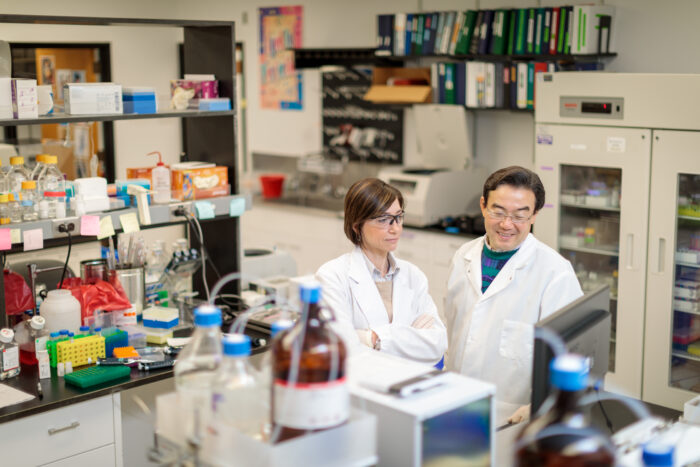 Scientists at Washington University School of Medicine in St. Louis have identified a previously unknown route for cellular fuel delivery, a finding that could shed light on the process of aging and the chronic diseases that often accompany it.

With age, cells gradually lose their ability to take in and process fuel. A cell that can’t fill its fuel tank, so to speak, can’t perform its proper functions. Researchers are interested in finding ways to boost the energy supply of aging cells in an effort to stave off the detrimental effects of the inevitable passage of time.

A key element of any cell’s fuel supply chain is a molecule called nicotinamide adenine dinucleotide (NAD). Past work has shown that NAD levels in tissues throughout the body decrease with age. One way cells manufacture NAD begins with a precursor molecule called nicotinamide mononucleotide (NMN), which is found naturally in foods such as edamame, broccoli, cabbage, cucumber and avocado. But how NMN gets into cells to be processed into NAD has long been a mystery.

In a new study, scientists led by Shin-ichiro Imai, MD, PhD, a professor of developmental biology, have identified a protein responsible for transporting NMN directly into cells, where it can be used for cellular fuel production. Not only does this protein move NMN into cells, it does so rapidly.

The study is published Jan. 7 in the inaugural issue of the journal Nature Metabolism.

Imai and his team long suspected there was a direct route for NMN to get into cells, simply because they had measured the speed with which NMN made the journey from the gut into the bloodstream and then into tissues throughout the body. In mice, that journey happens in a matter of minutes. The researchers felt there wasn’t time for complex biochemical reactions that might convert NMN into another form that could be taken up by cells.

“To achieve such fast uptake of NMN into the tissues, we speculated that there must be a specific NMN transporter that moves NMN directly into cells, even though no one had ever seen such a thing,” Imai said.

The researchers, led by first author Alessia Grozio, PhD, a staff scientist in developmental biology, conducted multiple experiments in cells and mice, identifying and then verifying that a protein called Slc12a8 is in fact the mystery transporter. The researchers also showed that Slc12a8 requires the presence of sodium ions to transport NMN into cells.

The scientists further showed, intriguingly, that cells dial up the expression of the Slc12a8 gene when NAD levels fall. When Grozio deliberately lowered NAD levels inside cells and then gave NMN to compensate, the resulting NAD manufactured in the cell overshot the amount she was expecting to see. This suggested that cells don’t just passively accept loss of NAD; they work to maintain their fuel supply by increasing amounts of the NMN transporter, thereby increasing their capacity to bring the raw materials required to make NAD into the cell. So aging cells can, to a degree, compensate for a depleted fuel supply. When NAD inside the cell drops, cells make more NMN transporters, increasing the amount of NMN they can bring inside.

Imai and Grozio pointed to the importance of the interaction of NMN and its transporter. It may not be enough, for example, to give NMN if the transporter is not working well. They see a role for both supplementing NMN and enhancing the function of Slc12a8 — the NMN transporter — in therapies that might help maintain cellular energy levels with age.

Indeed, past work in Imai’s lab has shown that giving NMN to older mice has beneficial effects on metabolism throughout the body, including positive effects in skeletal muscle, liver function, bone density, eye function, insulin sensitivity, immune function, body weight and activity levels. They also found that the benefits of supplementing NMN were seen only in older mice. Young, healthy mice likely have no trouble manufacturing sufficient NAD.

“What may be important in a future strategy is the combination of giving NMN along with stimulating the transport of NMN into cells,” Imai said. “With aging, we see a bottleneck in NAD production. The body loses its ability to manufacture NAD over time. At the same time, it seems to begin burning more NAD, likely due to chronic inflammation. If we can give NMN and aid its transport into cells, that may be a way to bypass the bottleneck.”

With this in mind, Imai’s lab already has identified small molecules that enhance the function of the NMN transporter. Working with Washington University’s Office of Technology Management, this technology has been licensed to a company in Japan called Teijin Limited that is working on new therapies targeting the chronic diseases of aging. There also is an ongoing clinical trial at the School of Medicine investigating the effects of NMN on older adults.