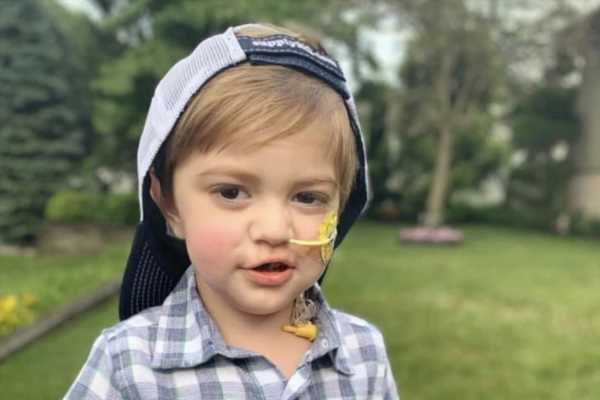 After dozens of high-fever infections, after excess fluid in the brain, after an enlarged spleen, after kidney and liver failures, after two bone marrow transplants, after high-dose chemotherapy and radiation, after cardiac arrest, after endless feeding tubes and breathing machines, 4-year-old Joseph Anthony Vena IV was tired.

Tired of fighting a mysterious infection that battered his body. Tired of shots and hospitals. Tired of focusing on his illness instead of interesting things like Spider-Man.

“For years, he kept going,” said his mother, Ashley Bitler. “But after Joseph’s second bone marrow transplant and rounds of chemotherapy, his body couldn’t take it. He looked at us and said he was tired.”

“His small body could only take so much,” said his father, Joseph Vena III. “With his medical treatments, everything that could have gone wrong or sideways did. Joseph kept pushing, but enough was enough.”

The boy’s infections confounded doctors up and down the Eastern Seaboard. Eventually, in 2019, a physician referred the parents to Megan A. Cooper, MD, PhD, an associate professor of pediatrics at Washington University School of Medicine in St. Louis. Cooper, who treats patients at St. Louis Children’s Hospital, specializes in diagnosing and treating rare genetic diseases affecting the immune system. She collaborates with pediatric specialists worldwide to try to solve their most puzzling cases.

A few months earlier, Cooper and a postdoctoral fellow in her laboratory, Jahnavi Aluri, PhD, began to study two boys with conditions similar to Joseph’s. Such cases have helped Cooper and other researchers identify a rare immune condition caused by a mutation in a gene known as TLR8 that plays a fundamental role in activating the immune system to fight viruses such as influenza. However, with this disorder, TLR8 is too active, causing inflammation as well as malfunctions in multiple parts of the immune system.

The TLR8 discovery inspired an ongoing collaboration of scientists nationwide who had encountered children and teenagers — all boys, at this point — with inexplicable immune deficiencies believed to trigger enlarged organs, blood disorders and sometimes death.

Cooper and Aluri documented the first six known cases of TLR8-associated immunodeficiency, published May 6 in the print edition of Blood, the journal of the American Society of Hematology. Recently, they identified an additional child with this disease and are actively searching for more.

The scientists dedicated the study to Joseph, whose parents helped fund the research through memorial donations to the St. Louis Children’s Hospital Foundation.

“We think there are many more patients who are undiagnosed because they’re not tested for TLR8 mutations,” said Cooper, the study’s senior author. She also directs the clinical immunology program in Washington University School of Medicine’s Department of Pediatrics, and the Jeffrey Modell Diagnostic and Research Center for Primary Immunodeficiencies at St. Louis Children’s Hospital.

“The immediate goal of our research is to identify more patients to learn about the causes of this disease,” Cooper said. “Eventually, we want to use what we learn to develop targeted testing and treatment to better care for these patients.”

Cooper never met Joseph because the pandemic and the severity of his illness precluded travel to St. Louis. However, while Joseph was still alive, samples of his lung and skin tissues and of his blood were sent to Cooper. The specimens, along with those from other TLR8 patients, live in Cooper’s laboratory in the McDonnell Pediatric Research Building.

From these blood and tissue samples, researchers developed cell lines, so that the cells could be preserved and transformed into a state in which they can continually divide and grow, often indefinitely. This allows researchers to study immune cells and the gene mutation responsible for the illness under various scenarios.

By studying the cell lines, the researchers discovered abnormal activation of the TLR8 pathway. Normally, activity is initiated only when needed — for example, when a virus invades the body. But in these patients, an unknown trigger in the gene activates the immune system, causing inflammation when it shouldn’t.

“Too much inflammation disrupts the immune system, and that’s what we’re seeing in these kids,” Cooper said. “But we need to detail what is happening because, before this, the TLR8 gene hadn’t been associated with any human diseases.”

A commonality among the patients is a low count of neutrophils, the most abundant kind of white blood cells. Neutrophils patrol the immune system and act as first responders by destroying foreign invaders. As a result, a body lacking in neutrophils becomes vulnerable to infections.

Patients with TLR8 mutations also tend to experience dysfunction in another type of white blood cells, known as lymphocytes. These cells adhere to a strength-in-numbers strategy, multiplying and producing antibodies to combat immune system interlopers. However, lymphocytes in these patients run rampant, often causing enlarged spleens and other organs that can rupture.

For treatment, three of the patients received bone marrow transplants — including Joseph, who underwent the procedure twice — to replenish the life-sustaining cells in their immune systems. The procedure proved successful in two patients. All of the patients also took immune suppression drugs, including chemotherapy. However, positive results were fleeting.

“In some cases, these treatments proved effective for a period of time,” Cooper said. “However, we need more research to determine what triggers the onset of the disease, because we’ve had some kids who were diagnosed as babies or toddlers and others as teenagers. We suspect that once we solve the mysteries behind the disease, we can develop more targeted treatments.”

The mutations in TLR8 serve as an example of somatic mosaicism, which occurs during fetal development and means that only some cells in the body have the genetic change. “Researchers are only now discovering somatic mosaicism as a cause for immune deficiencies in patients,” Cooper said. “Somatic mutations often happen with cancers. However, instead of cancer, patients in the study experienced a rare immune deficiency.”

Researchers also are perplexed because TLR8 immunodeficiencies have been identified in boys only. “The gene is on the X chromosome, and we know that boys have only one copy of X and girls have two X chromosomes,” Cooper said. “This means if a gene on one X chromosome malfunctions, the same gene on the other X chromosome can compensate for the deficiencies. However, we hypothesize that girls may be affected, too, and that’s something we’d like to investigate by increasing testing for the condition.

“This disease is one big puzzle,” Cooper added. “It’s been a significant challenge in the lab to piece it together. Usually, with a genetic disorder, you think about a gene that a child inherited from mom or dad. But for the patients identified with this genetic condition, it was not inherited. In some ways it is similar to cancers, because most cancers aren’t inherited but happen randomly.”

More than 30 scientists from a dozen or so research and medical centers contributed to the TLR8 study. However, the disorder was named by the fifth patient enrolled in the study, Evan Brandon of Tuscaloosa, Ala.

Since 2016, Brandon had battled frequent infections, ranging from skin rashes to gastrointestinal ulcers. He spent much of his high school years at hospitals in Birmingham, Ala., and Nashville, Tenn.

“A lot of the time, I felt normal,” Brandon recalled. “But then I’d get a weird infection or high fever and I’d have to go to the hospital for intravenous antibiotics. I missed a lot of school and social events. It got worse my freshman year in college. It was awful.”

Around this time, Brandon’s doctors had heard about Cooper’s ongoing study and realized that he had a mutation in TLR8 and referred him to Cooper for diagnosis and treatment recommendations. He took a year off from Princeton University to recover from a bone marrow transplant.

Because of the pandemic, Brandon, now 21, never met Cooper in person. But he stayed in frequent contact with her by email and phone.

One afternoon, on a whim, Brandon sent Cooper an email asking half jokingly if the disease could be named after him.

Cooper rejected the idea since other patients were in the study. She also noted that the trend in science is not to name diseases after people, but to keep the name generic and neutral.

However, she advised the teenager to string together initials of clinical conditions to form an acronym.

“In all seriousness, if you can put together a memorable acronym, let us know,” Cooper wrote Brandon in an email. “Now is the time to name this disease. Some words you could include: TLR8, inflammation, neutropenia, cytopenias, bone marrow failure, autoimmunity, lymphoproliferation.”

“Being a part of the study proved to be a positive result of this illness,” said Brandon, who has been healthy since the transplant. “I got to name a disease, and, I hope, my participation in the study will help scientists learn how to treat the mysterious INFLTR8.”