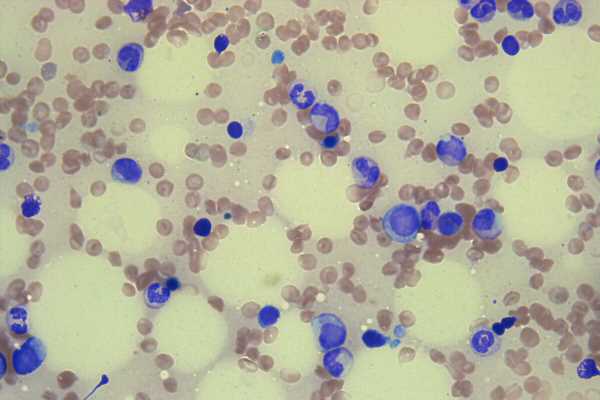 Mutations in donors’ stem cells may cause problems for cancer patients 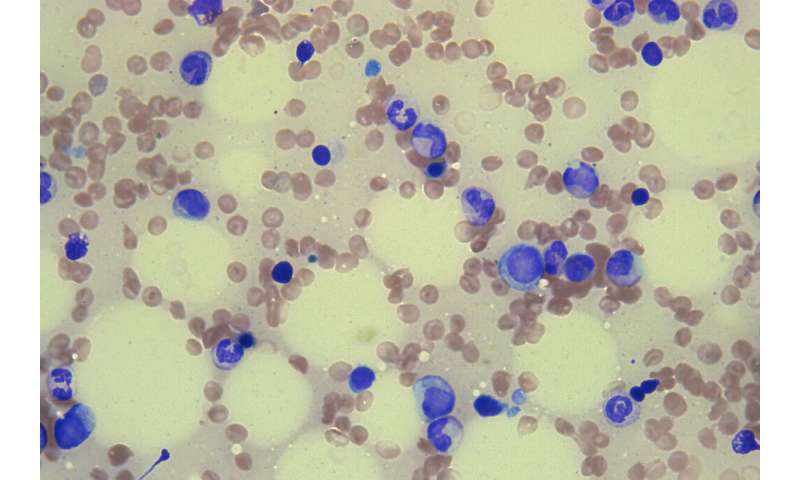 A stem cell transplant—also called a bone marrow transplant—is a common treatment for blood cancers, such as acute myeloid leukemia (AML). Such treatment can cure blood cancers but also can lead to life-threatening complications, including heart problems and graft-versus-host disease, in which new immune cells from the donor attack a patient’s healthy tissues.

A new study from Washington University School of Medicine in St. Louis suggests that extremely rare, harmful genetic mutations present in healthy donors’ stem cells—though not causing health problems in the donors—may be passed on to cancer patients receiving stem cell transplants. The intense chemo- and radiation therapy prior to transplant and the immunosuppression given after allow cells with these rare mutations the opportunity to quickly replicate, potentially creating health problems for the patients who receive them, suggests the research, published Jan. 15 in the journal Science Translational Medicine.

Among the concerns are heart damage, graft-versus-host disease and possible new leukemias.

The study, involving samples from patients with AML and their stem cell donors, suggests such rare, harmful mutations are present in surprisingly young donors and can cause problems for recipients even if the mutations are so rare as to be undetectable in the donor by typical genome sequencing techniques. The research opens the door to a larger study that will investigate these rare mutations in many more healthy donors, potentially leading to ways to prevent or mitigate the health effects of such genetic errors in patients receiving stem cell transplants.

“There have been suspicions that genetic errors in donor stem cells may be causing problems in cancer patients, but until now we didn’t have a way to identify them because they are so rare,” said senior author Todd E. Druley, MD, Ph.D., an associate professor of pediatrics. “This study raises concerns that even young, healthy donors’ blood stem cells may have harmful mutations and provides strong evidence that we need to explore the potential effects of these mutations further.”

Added co-author Sima T. Bhatt, MD, an assistant professor of pediatrics who treats pediatric patients with blood cancers at Siteman Kids at St. Louis Children’s Hospital and Washington University School of Medicine: “Transplant physicians tend to seek younger donors because we assume this will lead to fewer complications. But we now see evidence that even young and healthy donors can have mutations that will have consequences for our patients. We need to understand what those consequences are if we are to find ways to modify them.”

The study analyzed bone marrow from 25 adult patients with AML whose samples had been stored in a repository at Washington University. Samples from their healthy matched donors, who were unrelated to the patients, also were sequenced. The donors’ samples were provided by the Center for International Blood and Marrow Transplant Research in Milwaukee.

Druley co-invented a technique called error-corrected sequencing, to identify extremely rare DNA mutations that would be missed by conventional genome sequencing. Typical next-generation sequencing techniques can correctly identify a mutation that is present in one in 100 cells. The new method, which can distinguish between true mutations and mistakes introduced by the sequencing machine, allows the researchers to find true mutations that are extremely rare—those present in as few as one in 10,000 cells.

The healthy donors ranged in age from 20 to 58, with an average age of 26. The researchers sequenced 80 genes known to be associated with AML, and they identified at least one harmful genetic mutation in 11 of the 25 donors, or 44%. They further showed that 84% of all the various mutations identified in the donors’ samples were potentially harmful, and that 100% of the harmful mutations present in the donors later were found in the recipients. These harmful mutations also persisted over time, and many increased in frequency. Such data suggest the harmful mutations from the donor confer a survival advantage to the cells that harbor them.

“We didn’t expect this many young, healthy donors to have these types of mutations,” Druley said. “We also didn’t expect 100% of the harmful mutations to be engrafted into the recipients. That was striking.”

According to the researchers, the study raises questions about the origins of some of the well-known side effects of stem cell transplantation.

“We see a trend between mutations from the donor that persist over time and the development of chronic graft-versus-host disease,” said first author Wing Hing Wong, a doctoral student in Druley’s lab. “We plan to examine this more closely in a larger study.”

Though the study was not large enough to establish a causal link, the researchers found that 75% of the patients who received at least one harmful mutation in the 80 genes that persisted over time developed chronic graft-versus-host disease. Among patients who did not receive mutations in the 80 genes, about 50% developed the condition. Because the study was small, this difference was not statistically significant, but it is evidence that the association should be studied more closely. In general, about half of all patients who receive a stem cell transplant go on to develop some form of graft-versus-host disease.

The most common mutation seen in the donors and the cancer patients studied is in a gene associated with heart disease. Healthy people with mutations in this gene are at higher risk of heart attack due to plaque buildup in the arteries.

“We know that cardiac dysfunction is a major complication after a bone marrow transplant, but it’s always been attributed to toxicity from radiation or chemotherapy,” Druley said. “It’s never been linked to mutations in the blood-forming cells. We can’t make this claim definitively, but we have data to suggest we should study that in much more detail.”