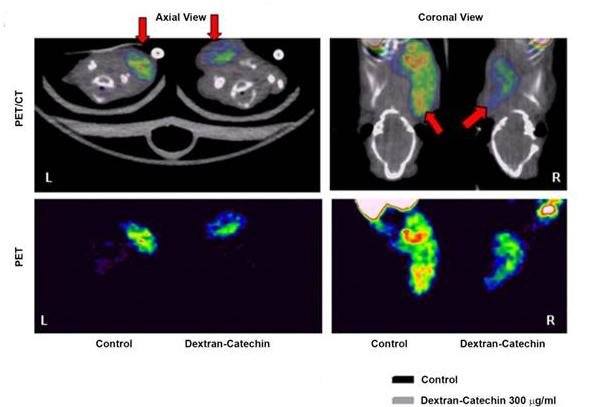 ANSTO’s unique capabilities and expertise in the production and application of radiotracers for imaging have been highlighted in a recent publication in the journal Theranostics.

In collaboration with researchers from the Children’s Cancer Institute (CCI) in Sydney, imaging was pivotal in understanding the mechanism of a promising new treatment developed at CCI for the childhood cancer neuroblastoma.

Dr. Arvind Parmar (below left), Dr. Giancarlo Pascali (below right) and Dr. Orazio Vittorio (below centre) of CCI led the development of a new PET imaging protocol using small quantity of the radioactive form of copper chloride that measured in vivo neuroblastoma tumour response to the drug Dextran-Catechin in a pre-clinical laboratory model.

Catechin is a polyphenol found in green tea and other healthy foods and its conjugation with dextran, a naturally occurring polysaccharide, sustains the anti-cancer action of Catechin.

In 2016 Dr. Vittorio’s team discovered that that neuroblastoma tumour cells need high levels of copper to survive. More recently the collaborating researchers used a radioactive form of copper to evaluate the imbalance of this metal created by Dextran-Catechin treatment.

Copper chloride, [64Cu]CuCl2 a known radiotracer built from the radioisotope copper 64, is typically used as starting material to create more complex radiotracers. Although initial studies have highlighted its potential use in clinical applications, it is currently seldom utilized in PET imaging.

However, the idea to use this simple radiotracer to study the mechanism of drug was novel.

“Early studies by Dr. Vittorio’s team showed that the Dextran-Catechin drug had an effect on copper levels, which gave us the idea that we could use simple copper chloride to evaluate the drug mechanism and evaluate drug efficacy,” said Pascali.

Molecular Imaging Scientist Parmar decided on the suitable laboratory model and on the organisation of the imaging protocol for these studies.

“The real power of the PET imaging technique is its capacity to capture biochemical processes at the molecular level, such as the regulation of copper” said Parmar.

The copper chloride was produced and supplied by the Charles Gairdner Hospital in Perth and all PET imaging was undertaken at ANSTO’s Lucas Heights campus.

The data accumulated from PET imaging and biological assays provided evidence that Dextran-Catechin worked by degrading copper transporter 1, which is mainly responsible of tumour copper uptake.

Basically, Dextran-Catechin works to sever the supply of copper in the tumour by recognizing its elevated copper levels, while not taking any action on healthy cells with a normal concentration of this metal. This phenomenon, in turn, significantly reduced the growth of tumours and prolonged the life of animals without affecting blood levels on circulating copper.

“This is a very powerful approach, that can be ascribed to the emergent ‘PET metallomics’ paradigm. Therefore, we envision the possibility of using this imaging method to determine which patients will respond to a specific treatment and allow us to adjust the dose based on a personalised response to treatment,” said Pascali, who with Parmar, is very interested in theranostic applications.

Loss of teeth in women is associated with hypertension
Health News