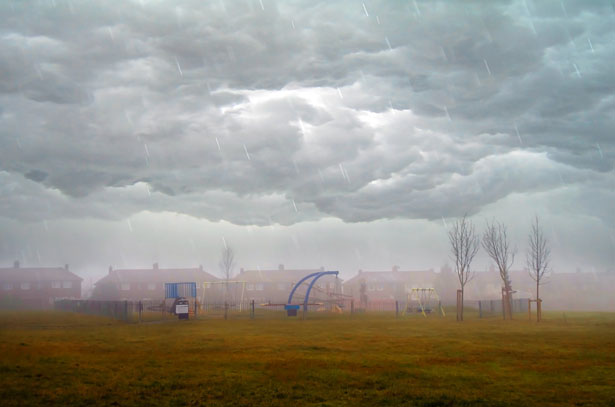 Can sudden weather change cause strokes?

A collaborative study led by a neurologist at Rush University Medical Center and an environmental scientist at the University of Illinois at Chicago suggests that weather patterns that cause dramatic changes in barometric pressure may increase the incidence of a type of stroke known as spontaneous intracerebral hemorrhage, that is, the rupture of a blood vessel in the brain.

The researchers reported their findings in the journal article “The Influence of Weather on the Incidence of Primary Spontaneous Intracerebral Hemorrhage” which recently was published in the online edition of the Journal of Stroke and Cerebrovascular Diseases.

“Prior studies have found that colder temperatures lead to an increased risk for intracerebral hemorrhage,” said Dr. Rajeev Garg, an assistant professor in the Department of Neurological Sciences at Rush and principal investigator of the study. “Temperature influences barometric pressure and vice versa.”

“What we do not know is which of these two is causing the increased risk of hemorrhage. Our findings suggest that when it gets colder outside, the corresponding barometric pressure is likely the cause for the increased risk for intracerebral hemorrhage, not just temperature change alone.”

“This is the first study to look at the collective influence of temperature, barometric pressure and dew point temperature on the incidence of spontaneous intracerebral hemorrhage,” Garg said.

Of the 603 patients, 455 (75.5 percent) patients identified had an established date and time when they each last felt normal. Then, temperature, barometric pressure, and dew point temperature were analyzed for a six-hour period prior to each stroke incident for the patients. The date and time of the last known normal, which is the time right before hemorrhage, were prospectively ascertained from each patient during a personal interview.

Three weather variables could be linked to higher hemorrhage risk

Researchers used a type of analysis called the Monte-Carlo simulation to determine whether the weather patterns prior to hemorrhage were different from the weather at a randomly selected moment in time. They found that the following three variables could be linked to higher risk for sICH:

Researchers also wanted to see if specific characteristics such as age, gender, or race were more likely associated with weather patterns that increased the risk for spontaneous intracerebral hemorrhage.

According to Max Berkelhammer, Ph.D., the environmental scientist at UIC who is co-investigator of the study, “if climate change leads to an increase in the variability of pressure, then we might see an increase risk (of sICH).

“The results of our study highlight the continued need for climate and atmospheric scientists to develop denser networks of observations to provide information on climate and weather at the scales of cities or even neighborhoods,” Berkelhammer continued.

“There are strong linkages between weather and human health, and we should work to harness the potential to operationalize weather data and weather models to reduce risks to vulnerable populations.