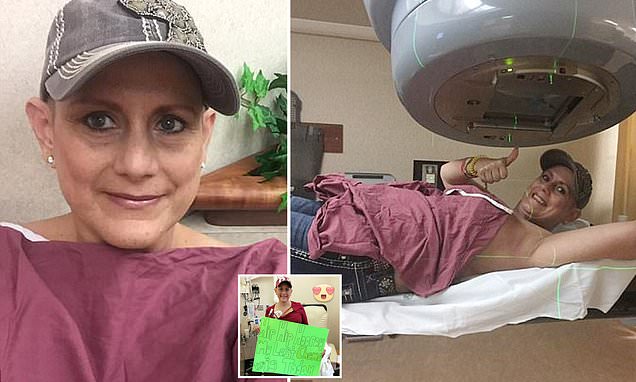 Women are not being warned that having breast implants could give them potentially deadly cancer, an expert claims.

The number of women getting cancer after having implants may be being underestimated, whether they’re part of cancer treatment or for cosmetic reasons.

Breast implant-associated anaplastic large cell lymphoma (BIA-ALCL) is an officially recognised type of cancer and has been reported 57 times in the UK since 2012.

Surgeons are being urged to be more proactive about diagnosing and reporting the condition amid concerns it affects one in every 24,000 implants in Britain. 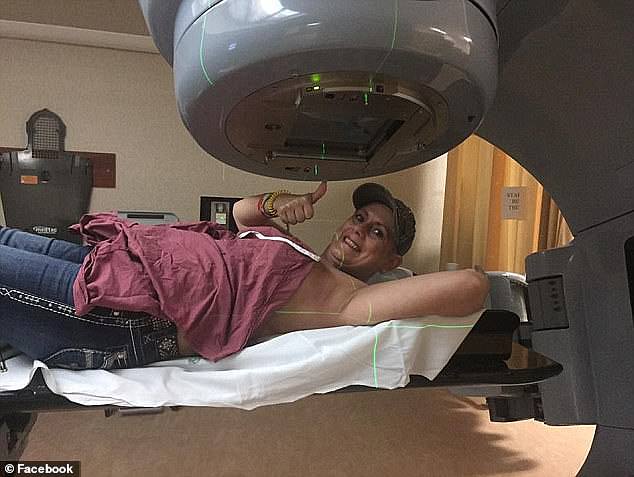 Kimra Rogers, 50, from Idaho, got cancer as a result of breast implants she had put in 14 years earlier as part of a breast enlargement – she says she was not warned about the risk and had chemotherapy and radiotherapy when doctors misdiagnosed her with Hodgkin’s lymphoma

Nigel Mercer, the former president of the British Association of Plastic Reconstructive and Aesthetic Surgeons (BAPRAS), told The Times he knows ‘for certain’ that women are not being told about the risk.

He said it would be ‘pretty devastating news’ for a patient who had already had their breast removed because of cancer to be told they had another form of the disease.

More than 40 per cent of women who have surgery for breast cancer have a mastectomy, in which the breast is removed.

Many of these women will have implants to reconstruct the breast afterwards.

‘I have seen patients who have not been warned there is a risk of BIA-ALCL by the clinic or surgeon they have seen,’ Mr Mercer said.

BIA-ALCL is a type of lymphoma, meaning it is a cancer beginning in immune system cells called lymphocytes. It can then spread around the body.

Non-Hodgkin lymphomas – of which there are more than 60 types –  have a 10 year survival rate of around 63 per cent, according to Cancer Research UK.

BIA-ALCL is usually noticed when women who have had breast implants feel one of their breasts swelling quickly but without causing pain.

It was identified for the first time in 2010 and the first case in the UK was diagnosed in 2012 – since then, 45 confirmed cases have met the official definition of the disease.

Exactly how the implants trigger the cancer is not known but it can normally be treated with surgery if caught early on.

‘MY BREAST IMPLANTS GAVE ME CANCER’

A mother-of-three from Caldwell, Idaho, last year revealed she had lymphoma which she believed was caused by her breast implants.

Kimra Rogers, 50, was diagnosed with lymphoma in May 2016 and, to her horror, she was told the cancer was likely caused by her breast implants.

She had the implants 14 years earlier to increase her breast size from a small B-cup to a large C-cup. 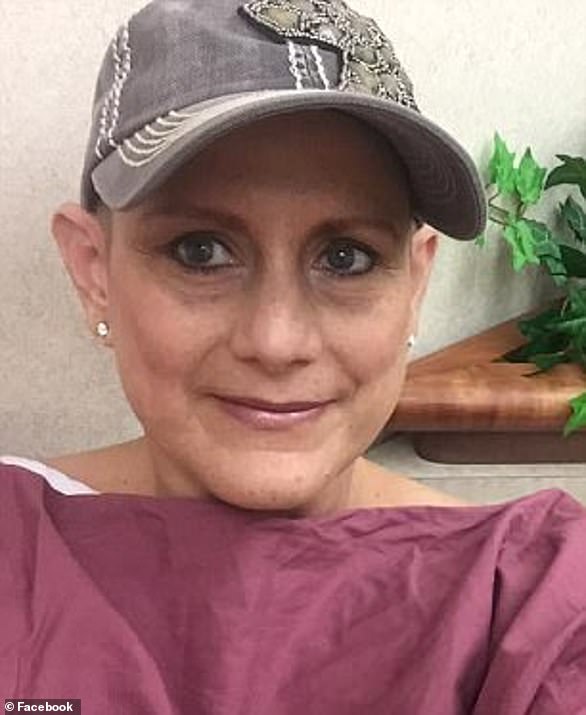 Although there is now research explaining the links between implants and breast implant associated anaplastic large-cell lymphoma (BIA-ALCL), Ms Rogers claims she was never told about the risk when she went to have the procedure done.

‘I remember telling my doctor: “They never once told me it would be a possibility I could get cancer if I got these implants”,’ she told Daily Mail Online.

Ms Rogers noticed something was wrong when her hair and skin started to become extremely dry and her hair began to fall out, then she noticed a lump under her arm.

Her doctors misdiagnosed her with Hodgkin’s lymphoma, for which she had chemotherapy and radiotherapy but the implants weren’t removed. 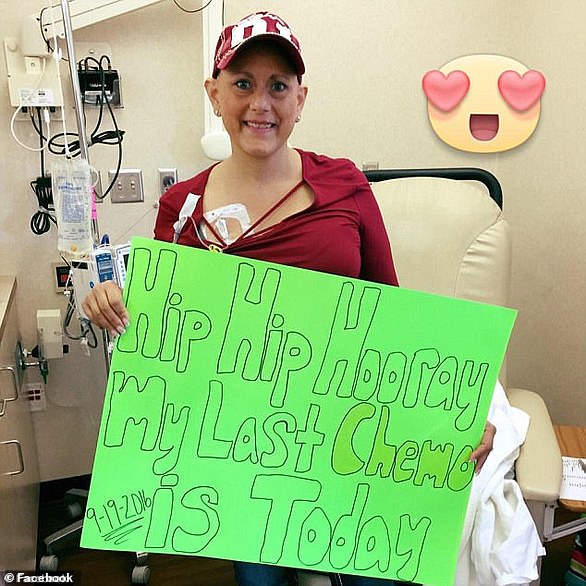 Ms Rogers’s doctors thought she had Hodgkin’s lymphoma so treated her with chemotherapy and radiotherapy, but did not remove the implants which they believed had caused the cancer

It was only when Ms Rogers did some of her own research online that she suspected she had BIA-ALCL. Her diagnosis was confirmed by a doctor but she couldn’t have her implants removed until at least six months after her radiotherapy.

When she spoke to Daily Mail Online last year, Ms Rogers was trying to raise money for surgery to remove the implants, which her health insurance company wouldn’t pay for, claiming it was cosmetic. It is not clear if she has had the procedure yet.

Ms Rogers said at the time: ‘In the end, the cancer wrapped up into my neck and clavicle, so I would’ve had to have chemo anyway, but I at least would have had the source of the cancer out of my body.

‘Surgeons won’t remove the implants until I’m six months past my last round of radiation. Had I been correctly diagnosed and had them out in the first place, it’s possible the whole ordeal would be over.’

The Medicines and Healthcare Products Regulatory Agency (MHRA) says it is ‘actively investigating’ the link and urges surgeons to report all suspected cases of it.

It is ‘essential all patients who are considering a breast implant for reconstructive or cosmetic purposes are made fully aware of the potential risks by their surgeon,’ the MHRA said in a joint statement alongside surgeons’ associations.

Rachel Rawson, clinical nurse specialist at Breast Cancer Care, told The Times: ‘After a life-changing breast cancer diagnosis, reconstruction can help many women feel more like themselves again, so then being diagnosed with BIA-ALCL is utterly heartbreaking.

‘We hear from the very few women blind-sided by this disease that it makes long-term recovery even more difficult, dramatically increasing feelings of anxiety, isolation and abandonment, and there’s often no support because it’s so rare.

‘It can reduce body confidence to an all-time low, sometimes taking away the option of having a reconstructed breast again forever.’

Most patients are declared cancer-free soon after having the breast implants and the surrounding scar tissue removed. Surgical treatment is essential to the management of the disease.

There were 359 medical cases of the disease reported as of February 1, 2017, and of those 126 were confirmed in the United States.

There have been 57 cases reported in the UK since 2012, when BIA-ALCL was first officially identified.

It most frequently occurs in women who had a type of implant put in that has a textured surface.

The disease is a type of T-cell lymphoma, which means it affects lymphocytes, more commonly known as white blood cells. These can start a cancer when one mutates to become abnormal or out of control, then divides into more cancerous cells which spread.

The overall survival rate for patients with BIA-ALCL is 89 per cent five years after being declared cancer-free.