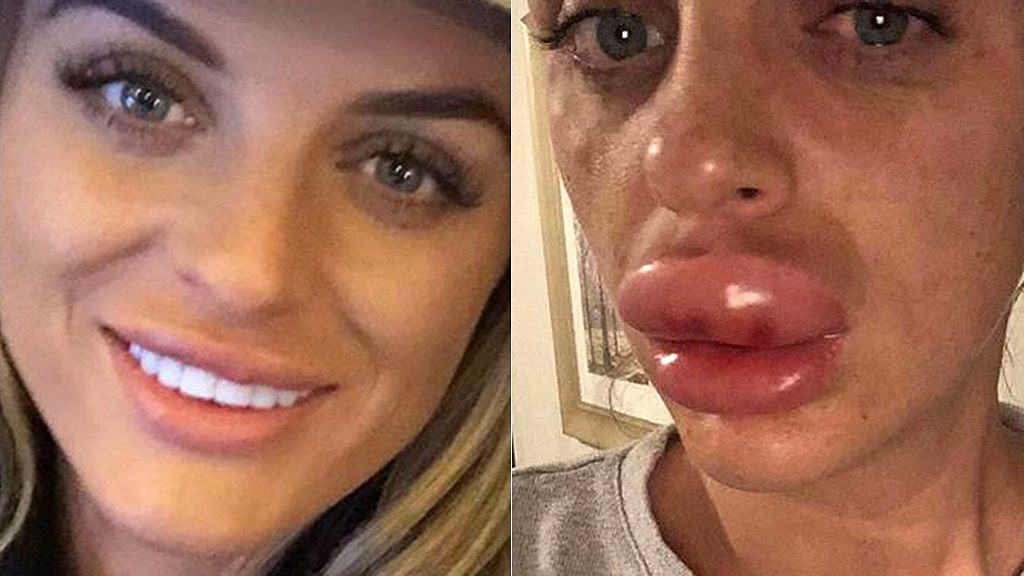 When Rachael Knappier went to a "Botox party" at a friend's home at the end of August, she planned to indulge in a shot of the wrinkle eraser in her forehead and a glass of fizz with her pals.

But, after a few glasses of Prosecco, she also agreed to have lip fillers.

What she didn’t bank on was the beautician injecting the filler into an artery, which caused her lips to swell massively.

In fact, the complications were so serious that she almost lost her top lip. 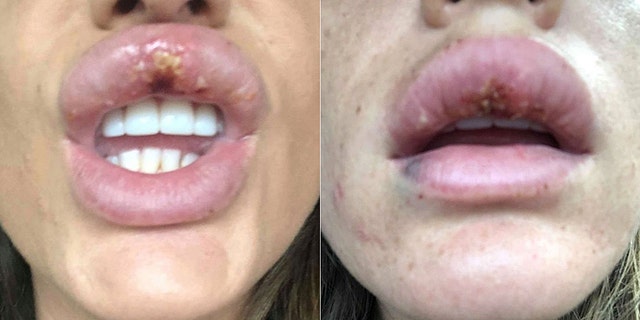 Knappier said she had previously received Botox at a clinic, and thought the injection would be safe.
(Courtesy of Rachael Knappier)

"My friend had raved about this beautician and how great she was so I decided to go ahead," Knappier said.

The 29-year-old had previously visited a local, highly-qualified, aesthetics nurse for Botox and a small dose of filler in her top lip to even out a permanent bump, a legacy of a fire door hitting her face as a teenager.

Even though her lip filler was due a top-up, Knappier hadn’t intended getting it done at the party. But that’s before the booze was uncorked.

Botox parties, which offer cheap beauty treatments as you relax with friends, are a growing trend in the UK. It’s now estimated that more than a million Botox procedures are performed each year in the UK and that number is rising.

"There was fizz and cake and it was a bit of a conveyor belt with girls sitting in the kitchen waiting their turn with local anesthetic cream on their faces," Knappier, of Leicestershire, said. "The beautician – who I assumed at the time was a nurse – didn’t ask me to sign any consent forms so alarm bells should have rung. But being at a party with friends took away all the seriousness of having filler injected into my face."

"She noticed the bump on my lip when she was doing my Botox and said she could inject a bit of filler for me if I wanted her to," she said. "To be fair, she told me to go and have a think about it in the kitchen but she’d found my weakness. My lip is the one thing that really bothers me about my appearance."

Knappier was given numbing cream to use on her lips before she hopped onto the bed where the beautician told her she was using a brand of filler called Teosyal, though it later transpired she'd used a different make entirely.

"One injection upwards towards my nose was very painful," Knappier remembered. "Within a few hours I began to feel unwell, my lips swelled like nothing I'd ever seen before and the pressure was unbearable." 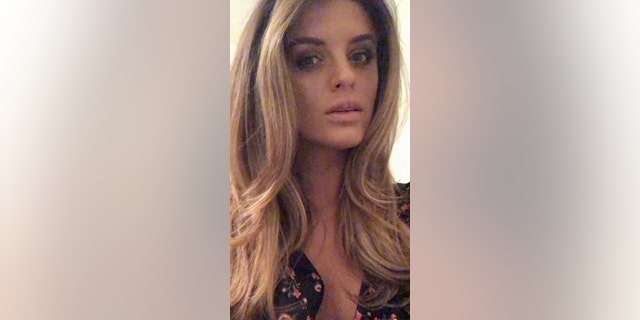 She said within a few hours she could feel that something wasn’t right.
(Courtesy of Rachael Knappier)

Panic stricken, she called the beautician – who Knappier has since discovered was released from prison earlier this year – who then Facetimed her to look at her lips.

After leaving A&E Knappier’s top lip split. She called her mom who suggested she contact The Consultant Clinic in London (who she followed on social media) for help.

“The owner told me I needed to get to London immediately and that she’d have an emergency doctor waiting for me," Knappier said. “She said that, based on looking at my pictures, her medical team suspected vascular occlusion, meaning that the filler had been injected into an artery and could lead to necrosis – death of soft tissue. I honestly thought I was going to die."

Due to the pain in her lips and the severity of the pressure, she contacted a local aesthetic nurse who injected her with antihistamine medication to attempt to reduce the swelling and pressure.

A couple of days later, Knappier then had several doses of dissolving agent injected into her lips at the Consultant Clinic.

“It was so painful, that my mum, who was sitting upstairs in a waiting room, could hear my screams," she said.

Within 72 hours of the emergency dissolving treatment, Knappier's swelling began to subside and, three months on, her lips are almost back to normal.

“I would never go near a Botox party again. I’m cross that I didn’t do my research and just assumed that everyone who injects Botox and fillers has been to medical school," she said. “I could have had the same reaction to the filler with a doctor but the difference is that they would have known what to do to treat it. The combination of the party atmosphere, my own naivety and the beautician’s lack of training meant I could have lost my lip."

She then contacted Antonia Mariconda, founder of the Safety in Beauty campaign, who said Knappier’s botched lip fillers were one of the worst cases she’s seen. 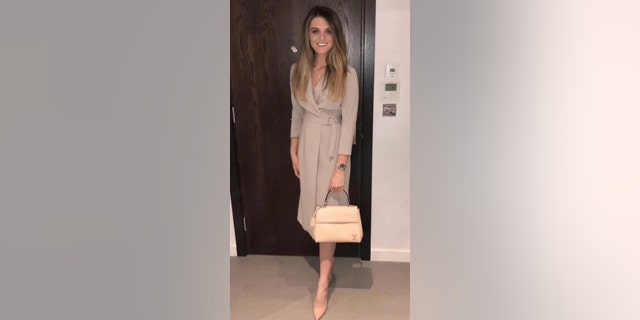 It has taken nearly three months for her lips to return to normal.
(Courtesy of Rachael Knappier)

“We urge ladies to please do their research and only entrust these invasive aesthetic procedures to experienced medical professionals," Mariconda said. “We are calling for the government to ban non-health care professionals from carrying out these seriously risky procedures and met with Theresa May earlier this year. It’s time to clean out the cosmetic cowboys."

General physician and cosmetic doctor Jane Leonard offers aesthetic treatments at clinics in London and Cheshire and says many women approach her having had a bad experience at a Botox bash.

"I only see these people when things have gone wrong. If you inject something into someone’s lips or face you have to know anatomically where you’re putting it, which a beautician isn’t going to know," Leonard said. "And a short course on how to give Botox and fillers isn’t going to teach you that."

"The second problem is the quality of the products they’re using, which is the biggest divide between doctors and dentists administering Botox and fillers and beauticians doing it for £50 in a salon or at a party," Leonard said. "If something goes wrong, we know what a vascular problem or an infection looks like and can act quickly to treat it but a beautician won't."

"There are two problems that I commonly see in women who've had treatment at a party – either they are dissatisfied with the results such as lumpiness in the filler or drooping from Botox, or they have a medical issue such as a blockage in the blood supply in the face, which is an emergency," she said.

Unfortunately, because the aesthetics industry remains unregulated it attracts unscrupulous profiteers with no medical training to cope with complications which may arise.

Nikki Milovanovic is a spokeswoman for the British Association of Aesthetic Plastic Surgeons (BAAPS) and says it’s a serious problem.

“Botox can only be injected by a prescribing clinician or under their supervision as it’s a prescription only medicine, but the problem is that many unscrupulous practitioners can get hold of Botox – or counterfeit products – online, and then administer it in non-clinical settings, anywhere from parties to ‘pop-ups’ and pub car parks,” she explained.

“Almost anyone can take qualification courses required to inject dermal fillers, which can be as short as half a day," Leonard said. "But fillers are unregulated so there's nothing stopping people from using the public as guinea pigs. Often the person administering injections is unable to recognize complications, let alone treat them."

A recent poll of BAAPS members revealed that 40 percent of them have seen an alarming increase in problems with unregulated facial injectables (dermal fillers) over the last five years, which would have been avoided if fillers were available on prescription only.

Autistic individuals are less vulnerable to cyber phishing attacks than others