Home » Health News » Two of Us: The pole dancing champions propping each other up in life 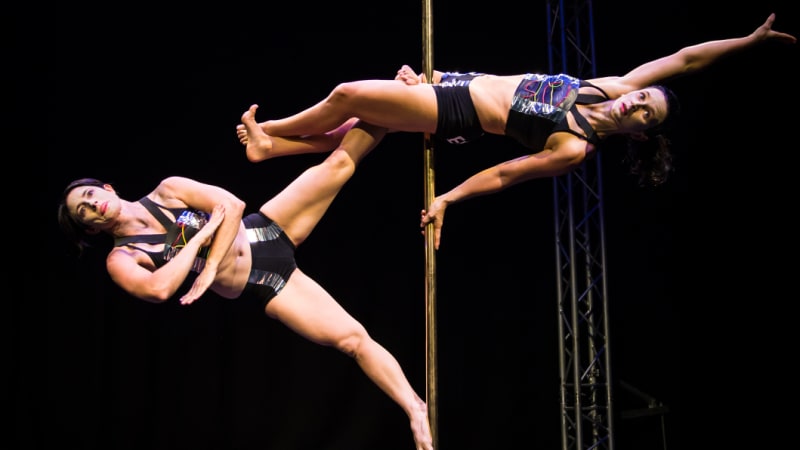 Two of Us: The pole dancing champions propping each other up in life

Physiotherapist Jude Perrett (left), 43, and primary school teacher Amy Davidson, 39, met at a Cairns pole-dancing class in 2013. They've since been Australian champions at their sport, and supported each other in other ways. 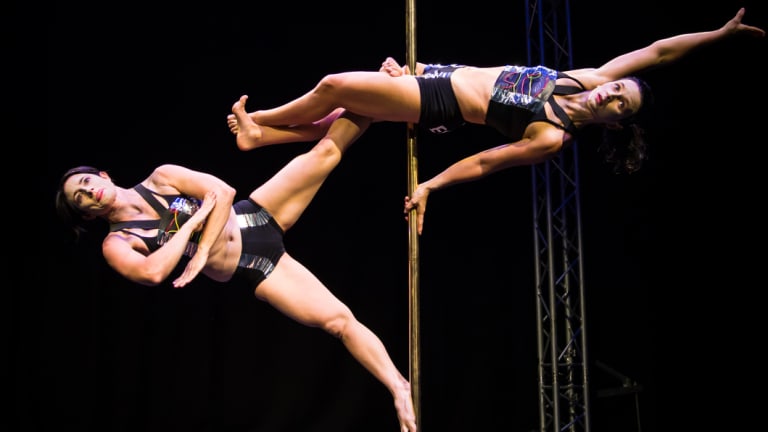 “We trust each other completely. You’ve got to, because you’re hanging off each other.”Credit:Charlotte’s Photography

AMY: In 2013, a year after having my third child, my husband, Troy, said it was time I did something for myself. So I went to a contemporary dance class, where someone showed me photos of pole-dancing classes. It looked fun: I could immediately see the strength and skill required.

At the pole class, Jude was clearly the most advanced person in the room. Everyone looked up to her. That year, Cairns actually hosted a regional pole competition, and our teacher wanted locals to put in a good showing, and said that Jude and I should compete in the doubles section. I think Jude was a bit, "Oh really?" about me at first, as she'd had a very good partner who'd left to live in England.

I was afraid I wouldn't live up to her high standards. But we trained together, went to the competition – and we were the only doubles contenders, so we won! Then we trained harder and won the Queensland championship, then the Australian one. We came 8th at last year's world championships, and in 2017 were ranked number three team in the world by the International Pole Sports Federation.

It took some time training together before I began to actually analyse our videos and focus on faults, like where we weren't pointing our toes, or our legs weren't straight. As an ex-gymnast, I'm very used to that sort of constructive criticism, but Jude might have been a bit affronted by it in the first couple of years. Now she's used to it, too, and likes the results. We trust each other completely. You've got to, doing doubles, because you're hanging off each other.

In 2016, my eldest daughter, Lily, suddenly became very ill. It was terrifying; she was deteriorating for five or six days and no one could work out why. While we were in the hospital as everyone frantically tried to find out what was going on, Jude was there with us every day, talking to the doctors. The night we finally got a diagnosis – she had a rare autoimmune disease, transverse myelitis – Lily was given a lumbar puncture and Troy and I had to just sit there and wait for her to get treatment. Jude came in with Chinese takeaway and helped us through it.

After that, Lily had to learn to walk again. For months after, Jude came over to our house to help her in her rehab. I'll never forget how much that mattered, not that she was giving us free physio, but because it was Jude who could be with Lily. She and Lily – who has completely recovered – have now formed a very special bond.

Pole has been a great outlet for me. Jude and I are both very focused – you have to be when you're in a knot high up in the air. It's partly scary and partly funny, especially when you've got your face in a really strange place.

Troy has set up a pole in our shed. My mum was here recently and could hear Jude and me training from the backyard. She said, "You girls are just talking and laughing the whole time. Do you ever actually get anything done?"

JUDE: When I first started in 2008, I didn't tell my physio clients about the pole classes, only friends. Amy, as a teacher, was also careful initially, afraid it would be misunderstood. But now, attitudes have really changed. I've had clients come along and see our local shows.

What we do we actually call "pole sports". I couldn't dance sexy if I tried! This year, there's a male category in the national championships. Quite a few ex-gymnasts move on to pole because it's skill- and strength-based, but without the jolting and jarring. The hope is that the Australian Sports Commission will soon recognise it as a sport here, it's a necessary step for gaining Olympic inclusion. Pole sports competition involves rigorous, highly technical judging, which is what attracted Amy as an ex-gymnast.

Amy is a beautiful, gentle soul. When I'm with her, she's often getting calls from people, asking for her ear. I've used her as a sounding board at various times. What I don't think many people know is that she has steel in her and is fiercely competitive. She's a lesson in discipline; that's what made her a national-level gymnast. When you're training, she smiles kindly like she understands your pain, but her eyes tell you to get up and have another go. I'd love to be able to do her handstands and her flips – quick stuff like that.

Competing together is a unique kind of relationship. It's high-pressure and you rely absolutely on the other person; you don't want to let them down, literally. We're both perfectionists, but we also have a similar sense of humour. When you're halfway up a four-metre pole trying out a new move and you're in an awkward position – you might have a foot in someone's ear – and you start laughing, the more you laugh the more dangerous it is, trying not to drop the other person on their head.

Sometimes, after we train at Amy's place, I'll stay for dinner with her family and then we'll play a board game with her kids: last Sunday, her girls all killed me at Ticket to Ride. I'm single, so it's really nice to be part of that family environment.

When Lily was desperately ill, it was terrible; the outcome could have been very dire. She's such a bright, happy, creative kid. Amy was pretty fragile at the time. The whole experience shook her for a long while afterwards; she broke down when we got off stage at the Australian Pole Championships that year. One thing I remember from that time, though, was when Lily ate her first meal after three days of being pretty out of it receiving intense IV treatment. It was a very touching moment. Amy was feeding her, and they were both smiling.

To read more from Good Weekend magazine, visit our page at The Sydney Morning Herald or The Age.

Income, lifestyle may contribute to disparity in cancer deaths