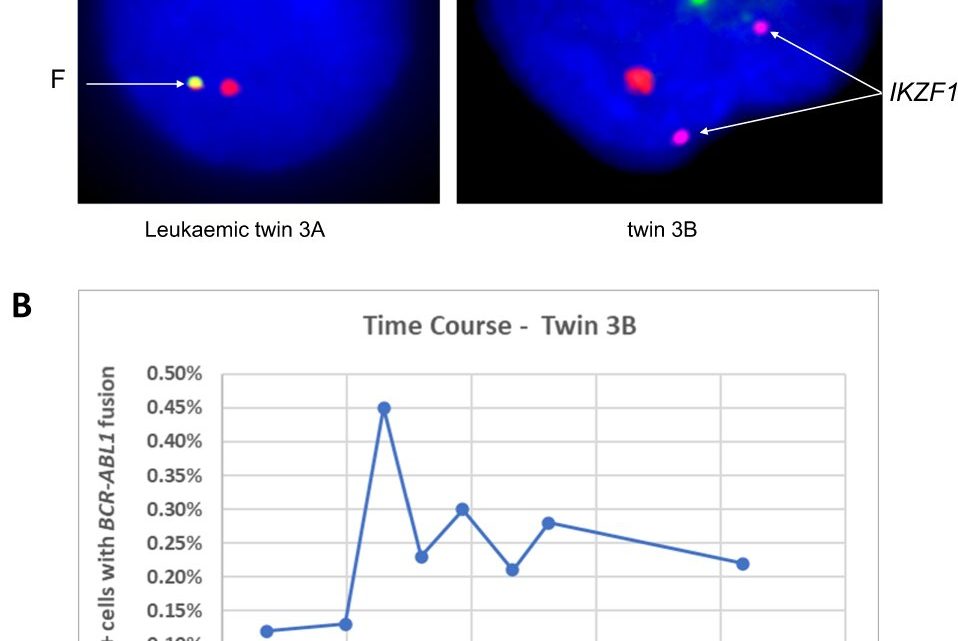 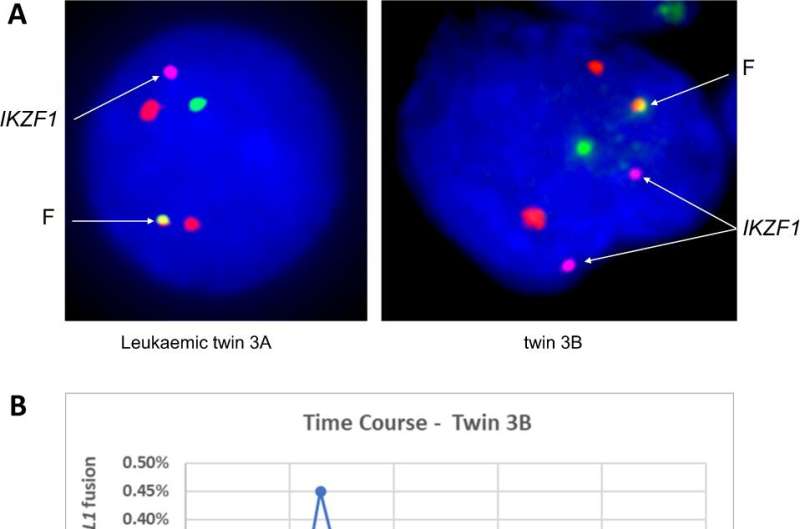 By studying rare cases of identical twins with leukemia, scientists have shed new light on the origins of the most common type of childhood cancer—confirming it originates in the womb but that events after birth determine whether or not clinical leukemia develops.

Findings from researchers at The Institute of Cancer Research, London, will help clinicians advise parents of twin children with acute lymphoblastic leukemia (ALL), offering guidance on risk level and screening.

The first-of-its-kind study, which was published in the journal Leukemia, involved seven pairs of twins with “discordant” ALL, meaning that only one twin in each pair, at least initially, had the disease.

The researchers followed the twins for up to 15 years to understand the biological reason why an otherwise healthy twin is at a higher risk of developing ALL later if their identical twin has already been diagnosed with the disease.

That risk is calculated to be around 15–25% compared to less than 1% for a non-identical twin or other sibling. But, as this study confirms, that high risk only applies if the identical twins shared a single placenta before birth.

Two ‘hits’ of genetic changes needed to trigger ALL

Previous research by the same team suggested that two “hits” of genetic changes are needed to “trigger” ALL. The new findings confirm that the first genetic change arises in the womb and is shared by blood cells of both twins via their common blood supply. The second change—if it happens—occurs after birth.

The new research shows that the healthy twin of a patient with ALL has low but detectable levels of “clinically silent” but mutant “pre-leukemia” cells in the blood. These cells carry the exact same “first hit” mutation as the co-twin with ALL, which means they can be measured and monitored. If those cells increase in number, this may signal the development of ALL—prompting a bone marrow biopsy and potentially early treatment.

But if the healthy twin has persistent very low levels of such cells that do not increase or even decline then this provides reassuring evidence to clinicians and parents that ALL is not developing.

To date, two healthy co-twins involved in this study—who had low levels but detectable levels of pre-leukemia cells in their blood—had later diagnosis of ALL.

Confirmation that ALL originates in the womb

The discovery confirms that, like cases of childhood ALL in identical twin pairs or singletons, these cases of “discordant” ALL in twins also consistently originate in the womb.

The fact that sometimes only one identical twin develops ALL is therefore due the lack (in one twin) of the crucial second post-birth “hit,” or mutation, which is believed to be triggered—probably by common childhood infections, according to other research from the group who led this study.

Other research by the group has shown that a surprising number of children are born with the first mutational “hit” but only very few (around 1%) go on to develop ALL. Research by the team is now focused on understanding what determines the likelihood of this second infection-driven “hit” during the early school age years.

The findings have implications for clinicians and parents of twin children with ALL. In the past, parents have been given variable advice on risk to any healthy twin when the other develops the disease.

The new findings suggest that the risk can be more accurately assessed—firstly by determining whether the twins are identical and shared a placenta and then by serially checking them—by tracking the levels of pre-leukemia cells in their blood.

When one of the twins remains clinically well, researchers recommend re-screening every three months—to keep track of the level of pre-leukemia cells and whether they are increasing. Risk to the second twin is greatest in the first year after the first twin is diagnosed and declines after that—meaning that screening of asymptomatic, healthy twins is probably unnecessary after the age of ten.

New insights into the origins of ALL

Professor Sir Mel Greaves, Founding Director of the Center for Evolution and Cancer and Professor of Cell Biology at The Institute of Cancer Research, London, said,

“Our study provides new insights into the origins of childhood acute lymphoblastic leukemia—the most common type of childhood cancer, accounting for 80% of leukemia cases in children.

“Our previous findings showed that leukemia in twins is due to sharing of blood cells within a single placenta before birth—rather than genetic inheritance. These new findings confirm that the disease can be traced back to the womb when pre-leukemia cells spread via the twins’ shared blood supply.

“What remained a mystery until now was why sometimes only one twin is diagnosed with leukemia—leaving clinicians in the dark when it comes to offering advice and reassurance to parents. In this new study, we provide a biological explanation for what happens in this case and show that the healthy twin often has a small number of pre-leukemia cells in their blood, which have the same genetic markers as the cancer cells in the sick twin.

“This has practical implications, as we can accurately assess the risk of the disease and guide screening and monitoring by measuring the levels of pre-leukemia cells in the blood. If one twin develops ALL, the other twin has an increased risk of developing leukemia—but only if the twins shared a placenta in the womb, which only happens in around 60 percent of identical twin pairs.

“We still do not know for certain what leads to the first ‘hit’ of genetic changes in the womb, but we think that the second ‘hit’ of genetic changes is probably triggered by common childhood infections—opening up the possibility of ‘priming’ the immune system in infancy to avoid the development of the disease later on in life. Our current research suggests that the gut microbiome may be playing a key role in this process.”

Sarah McDonald, deputy director of research at Blood Cancer UK, said, “Acute lymphoblastic leukemia (ALL) is the most common type of cancer in children, affecting children more often than adults. Understanding the mechanism as to how the cancer develops in identical twins, and why often only one develops leukemia is an important question to answer. It helps us understand both the risk of the other sibling developing leukemia and provides insight into how leukemia develops in all children.

“This research shows that in cases where one twin develops leukemia, and both twins both share a placenta during pregnancy, two events are needed to determine whether the other sibling develops the disease—one before birth and the other after. This work, made possible by research volunteers with leukemia over a number of years, opens up the possibility of seeing if the unaffected sibling has pre-leukemia cells in their blood. If they do, it may mean that they can be closely monitored and treated early if it looked like they were going to develop leukemia, giving them the best possible chance of survival. This finding could also help clinicians give guidance to families on the likelihood of the sibling developing childhood ALL.

“On behalf of Blood Cancer UK, we want to thank our supporters, who enable us to fund pioneering research like this. While this research adds to our understanding about how childhood ALL is triggered, there’s still more to be done to complete the picture, to get to the days where no lives are lost to blood cancer.”

With COVID on the rise again, here are some simple steps to help us socialize safely during the holidays