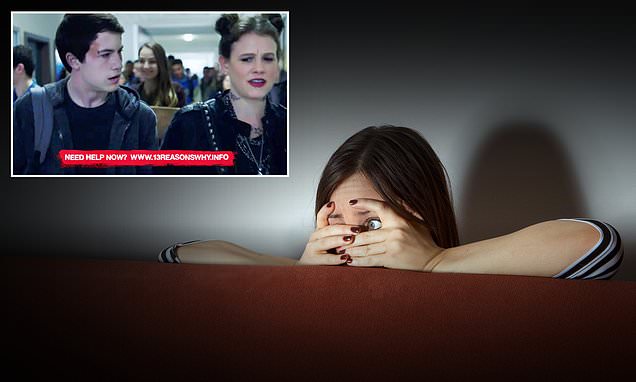 Last month, as I settled down to binge on my favourite Netflix drama, a startling message flashed up on screen. Before the first episode, the actors went out of character and earnestly issued the following statement: ‘This programme contains content some viewers may find distressing.’

A special website, they said, had been created to help us cope with the sensitive ‘themes’ that may arise.

My evening wind-down routine had suddenly become stressful. My heart rate began to thunder and my fingertips tingled as I anticipated the disturbing scenes I was supposedly about to witness. 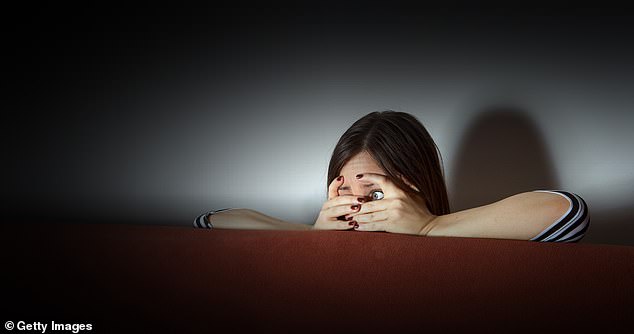 TV trigger warnings are being broadcast ahead of news reports, documentaries and even soaps as some experts believe avoiding distressing scenes could reduce copy-cat incidents 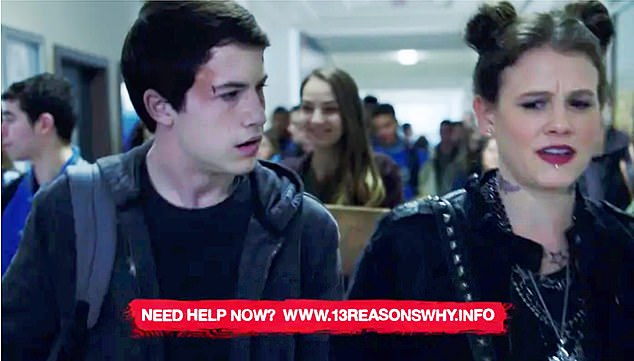 The programme was the controversial series 13 Reasons Why, blamed in 2017 for a surge in US teenage suicides due to its graphic portrayal of self-harm methods.

Such warnings are apparently deemed necessary by some mental health professionals to prevent copy-cat incidents, I learned.

But over the past few weeks, I’ve noticed these forewarnings are not just reserved for these most serious situations. Nor are they only seen before particularly harrowing news reports. Hundreds of documentaries, series and soaps now caveat their programmes with so-called trigger warnings.

Cambridge University students are even forewarned about gore and violence in Shakespeare texts, and US students have requested to be alerted to references to suicide in Virginia Woolf’s Mrs Dalloway.

Some writers now prepare readers for their hard-hitting online articles by writing ‘‘#triggerwarning’ before the first sentence, and smartphone apps filter upsetting images out of Google searches.

Supporters of these measures say the messages are necessary for protecting the mentally unwell. They say content that reminds viewers or readers of a disturbing or traumatic time can spark distressing flashbacks.

Some researchers say this is a particular concern for sufferers of post-traumatic stress disorder, which is estimated to affect three per cent of Britons.

But, given my visceral, anxious response, I struggle to believe they are helpful. And judging by a recent cascade of psychological research, it would seem I am right.

Most recently, psychologists in New Zealand asked 1,300 volunteers to watch a disturbing video of a fatal car crash.

Half were warned about the graphic content before the start of the film, and half were not.

All participants became equally as emotionally moved; the pre-warning made no difference.

‘Trigger warnings are not helpful for most people’s mental health,’ says Nick Grey, a clinical psychologist from NHS Sussex Partnership. ‘They prompt people to be on high alert when they don’t need to be.’

And far from merely being unhelpful, trigger warnings could even harm the vulnerable people they are intended to help.

If you’re set up to be stressed, you will be

One of the first studies published on trigger warnings produced rather ironic results. Scientists at Harvard University found that warning students about forthcoming disturbing passages in the Dostoyevsky book Crime And Punishment actually increased mental distress during reading and directly afterwards.

Measurements of anxiety showed a marked increase too – similar to my experience. A follow-up experiment showed the same was true for victims of trauma, even when subjects’ traumatic experience matched the one on screen.

One reason for the effect, argue scientists, is due to a psychological concept known as priming. This relates to a stimulation that prepares the mind for a specific psychological emotion – in this case, feeling scared or anxious.

Kimberly Wilson, a chartered psychologist working in London, explains: ‘Your attitude towards something can modulate the amount of stress you feel from something. So if you’re warned to expect that you will be traumatised by something, it’s more likely to elicit that response. It’s essentially setting people up to expect pain and distress. And even if what you’re witnessing does reflect your personal trauma, it might not have even crossed your mind if it wasn’t for the warning.’

Indeed, the Harvard researchers found that, for those who were emotionally vulnerable, trigger warnings reinforced survivors’ view that their trauma was central to their identity.

In other words, the warning served as cruel reminders.

This is particularly concerning for those with mental health conditions, according to Wilson. ‘Studies show that people with depression or anxiety are already primed to find negativity more easily. Not only does this make them quicker at arriving at the worst conclusion, it also increases feelings of unhappiness. Telling a vulnerable brain to expect negativity can lead it to jump to the worst possible conclusion.’

But it can be good to revisit your trauma

It is estimated that one in three British adults have encountered a traumatic experience, according to the Mental Health Foundation.

And three in every 100 are diagnosed with post-traumatic stress disorder, characterised by intense flashbacks, intrusive thoughts and avoidance of activities related to the event. While triggers can be unhelpful, forcing people to deal with the expectation of difficulties and evoking unnecessary anxiety, it can also be useful to actively confront your trauma.

One of the best-researched interventions for treating trauma-related mental health problems – recommended by health watchdog NICE – is a type of talking therapy called exposure therapy. With the support of a therapist, patients revisit the traumatic memory in detail and gradually reintroduce themselves to experiences they are avoiding, such as driving or watching a particular television programme.

Studies show that when patients are able to consciously confront their painful memories, anxiety and fear dissipate, reducing the frequency of flashbacks. But trigger warnings promote avoidance – directly undermining this therapeutic principle. ‘Avoidance is known to reinforce the problem for people affected by traumatic events,’ says Grey. ‘The more you deliberately try to push intrusive thoughts or memories out of your mind, the more they crop up.’

Exposing trauma victims to distressing experiences via film or pictures is even recommended by experts. The American Psychological Association’s encyclopedia of mental illnesses lists ‘electronic media, television, movies or pictures’ as potentially therapeutic.

And psychologists in Quebec and California are using virtual-reality headsets that can recreate terrifying experiences to help rape victims and war veterans.

A 2015 analysis of 16 studies involving film-focused exposure therapy concluded that the technique successfully ‘lowers emotional response to traumatic footage’. However, there are some specific situations, according to Grey, in which trigger warnings are essential.

‘We know that for people feeling suicidal, content about means and method of suicide can generate ideas,’ says Grey. ‘So we do need to follow the strict media guidelines for reporting suicide, which may include a trigger warning.’

As for other potentially triggering subject matter, Grey says: ‘Warnings are pretty much useless.’

MAFS' Jamie Otis Is Expecting Baby No. 2 After Miscarriages

Girl, two, has suffered over 50 broken bones due to a rare disease
Health News