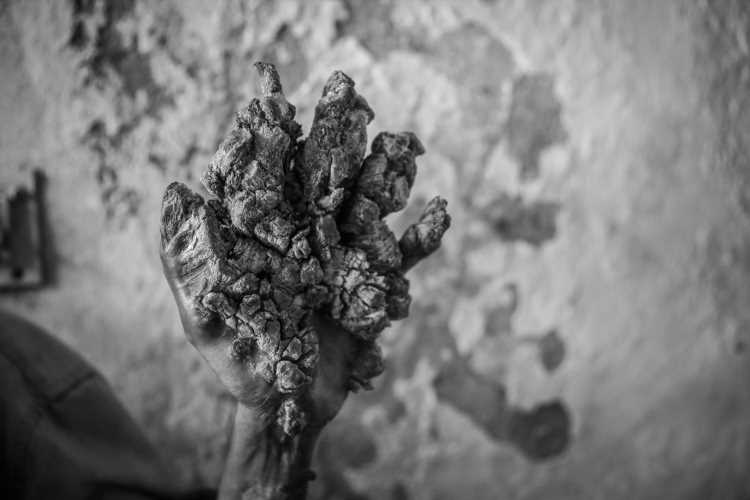 A man in Gaza with an extremely rare skin condition dubbed "tree man syndrome" says his life has been changed by a pioneering surgical treatment, according to news reports.

The man, 44-year-old Mahmoud Taluli, has undergone four surgeries in the last two years to remove extensive, wood-like lesions on his hands, according to NPR. Prior to the surgeries, Taluli hadn't been able to use his hands for more than a decade.

"After years of suffering and solitude, I can finally live a normal life," Taluli told NPR. "I can play with my children. I can go to family events. I no longer need to cover my hands when I go out in public."

Taluli has a rare genetic condition called epidermodysplasia verruciformis, which makes him much more susceptible to skin infections caused by the human papillomavirus (HPV), compared with the average person, according to a 2010 report of the condition published in the journal Disease Markers.

People with this condition have immune system problems that prevent them from properly fighting of HPVs — a group of more than 150 related viruses. In healthy people, HPVs often don't cause symptoms, but in people with epidermodysplasia verruciformis, the infections lead to the formation of wart-like skin lesions, which progress to malignant tumors in about 50 percent of patients, according to the 2010 report.

There is no cure or standard treatment for the condition. Taluli's treatment has involved doctors making deep incisions into the skin to remove thousands of lesions, NPR reported. This tissue removal often requires skin grafts from other parts of his body to help with healing.

The treatment has allowed Taluli to use his hands again, but it is not a cure — new growths continue to show up, and Taluli will need a fifth operation this summer to remove these new lesions, as well as some scar tissue, NPR reported. Still, the treatment has been largely successful in improving Taluli's hand function.

"We didn't know if there would be anything viable left of his hands, but thank God it's working," Dr. Michael Chernofsky, a hand and microvascular surgeon at Hadassah Medical Center in Jerusalem, who treated Taluli, told NPR.

Another man with epidermodysplasia verruciformis hasn't fared as well. Last month, it was reported that Abul Bajandar of Bangladesh had asked doctors to amputate his hands due to pain from the condition, according to Fox News. Although Bajandar has had more than 20 surgeries to remove skin lesions, the growths appear to be coming back worse than before. Chernofsky told NPR that amputation is usually not a good idea, because the patient would likely still experience pain from severed nerves.

Type 2 diabetes: Four simple ways to control the condition – are you aware of this?