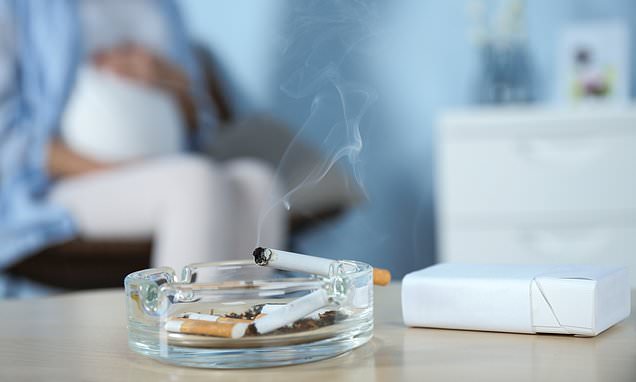 The rate of tobacco use among pregnant women in the US is plummeting (though cannabis use is climbing), but health officials are still concerned about nicotine addiction among young women, particularly since e-cigarettes hit the market.

The new study by Kentucky University hammers home the dangers by revealing, for the first time, evidence that combustible cigarettes increase levels of a fat-fueling protein in a woman’s unborn baby.

The discovery sheds fresh light on a phenomenon that has been identified in previous research but could not be explained. 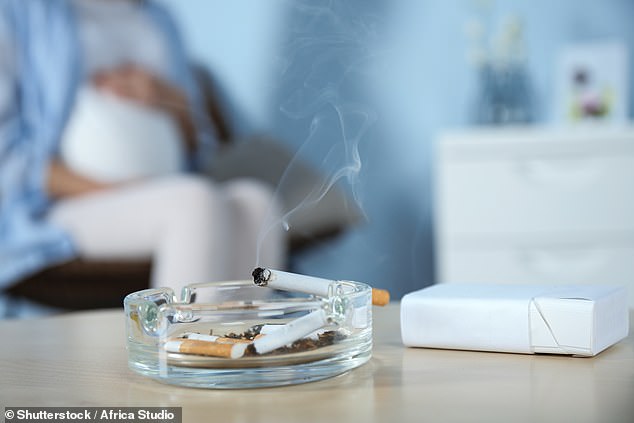 Tobacco among pregnant women in the US is dropping (as cannabis use climbs), but vapes have officials concerned about young women’s nicotine addiction. This Kentucky study shows yet more reasons tobacco is dangerous to unborn babies

Previous studies already identified links between tobacco during pregnancy and low birth weight and premature delivery of the baby.

But evidence is now emerging of the way in which it affects the child’s health in the long-term.

In the first study of its kind the team at Kentucky University found cigarette smoke chemicals cross the placenta – boosting amounts of a molecule called chemerin.

The protein is associated with obesity: the greater it is expressed, the stronger the likelihood of a child being overweight, and finding it hard to slim down.

Corresponding author Dr Kevin Pearson said: ‘Our long-term plan is to study the impact of exercise during pregnancy and its ability to improve health outcomes in offspring.

‘However, as we began to transition our work from laboratory animals to humans, it quickly became apparent that a fairly high percentage of the pregnant population delivering at our hospital continued to smoke cigarettes throughout pregnancy.

‘Thus, we set out to investigate the mechanisms of why babies born to smokers are at risk for later diseases.’

The study published in Experimental Physiology was based on analysis of tissue which is normally discarded following birth.

Chemerin is produced by fat cells and is present in higher amounts in the blood of obese people.

The researchers used the foreskins of recently circumcised newborn males to study levels in those exposed to cigarette smoke during pregnancy.

The samples are safe and simple to collect and the researchers had previously demonstrated it to have similar properties to other tissues – like fat.

This would have been too invasive to collect from babies, said lead author Dr Leryn Reynolds.

The results showed chemerin was more prevalent in the skin of infants whose mothers smoked during pregnancy.

More detailed analysis suggested that this increased expression corresponded with reduced DNA methylation – a process which regulates it.

Dr Reynolds said this suggests smoking in pregnancy leads to changes in the regulation of genes which play an important role in fat cell development and obesity.

The team now plans to measure chemerin levels in isolated cells from the umbilical cord of both baby boys and girls – which is similarly easy to obtain.

They also hope to conduct experiments on smoke exposure during pregnancy in mice, as it is easier to control for other factors which might affect obesity.

Further various tissues can also be measured to assess gene expression in order to better understand how smoke exposure in the womb impacts the whole body.

Dr Pearson said: ‘In the future, we would love to work on ways to improve smoking cessation programs or ways that we can increase exercise levels in smokers as a way to combat the negative outcomes in offspring, but we are really just starting to scratch the surface in this area.’

Insulin for all diabetics is not enough