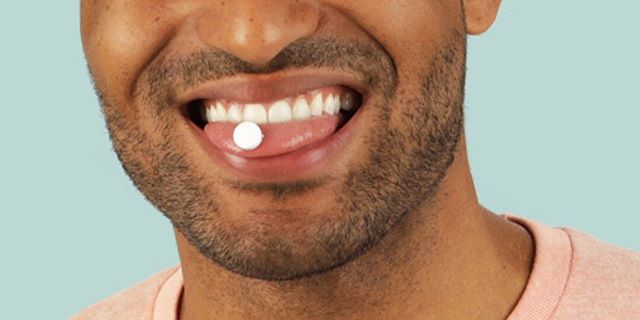 This Mint Promises to Kick Sugar Cravings—and it Works

When a box of mints that promised to stop sugar cravings landed on my desk, I thought a coworker was toying with me (my love of gummies and cake are notorious around the office). But then I discovered that the person behind the product was Harley Pasternak, who trains stars like Frank Ocean. I scheduled a meeting with the man.

Pasternak explained he always had a sweet tooth. But the 45-year-old Revenge Body star realized his affinity for pastries was a tad overzealous after a barista called him out for ordering three cookies on three separate coffee runs–in the same day.

He remembered thinking, “I’m not here for the coffee,” Pasternak explained to Men’s Health. “I’m buying a coffee because I’m embarrassed to just buy a cookie.”

That thought prompted the trainer to create a Nicorette for sugar that contained Gymnema Sylvestre, a type of herb that supposedly suppresses the sweetness of foods. This may work because the gymnemic acid found in the plant interferes with the taste receptors responsible for detecting sweetness.

“I would rub it on the roof of my mouth and then go for coffee,” says Pasternak. “And it worked.”

Pasternak advises drinking a glass of water mixed with the powder every morning to stabilize blood sugar. Each meal should be ended with a mint to avoid snacking on gummies, chocolate, or ice cream, according to Pasternak.

“The idea is that most people consume sugar in between meals,” says Pasternak.

Of course, mints can also be popped whenever your inner voice pleads for a pint of ice cream.

When I met Pasternak at a gym in New York, I previously tested SweetKick and never noticed a difference in sugar cravings.

“The mint doesn’t work,” I explained to him after relaying that candy still tasted delicious even after consuming a mint.

Turns out, the problem was user error. Mints need to fully dissolve on your tongue and shouldn’t be chewed.

Reset travels. Where will we go next? Tag us wherever you are! #NotTodaySugar

Pasternak instructs me to try again, and then asks me to eat some table sugar. Still skeptical, I expect to detect even a tiny hint of sweetness from the white stuff. I’m surprised to find that it doesn’t taste like anything. Next, I take a sip of coke. Again, it’s flavorless.

It sounds absurd that a simple mint could make a towering slice of chocolate cake taste, well, bland–but it works. However, I’m still convinced this is some sort of scheme, so I ask Registered Dietitian Abby Langer, R.D., about her thoughts.

“I’m shocking myself by saying this, but I think it’s actually fine,” she tells Men’s Health. In fact, she says the mints can help people slowly decrease their sugar intake–which is what she generally advises.

“We’re so used to having sweetness everywhere,” she says. “I try to teach people to cut back on sweets all together, so you’re not used to sweet and don’t expect it everywhere.”

Sugar is included in some pretty surprising foods, including packaged burgers, tomato sauces, and condiments. And yes, SweetKick will alter the taste of any food that includes sugar.

Everyone’s sugar intake is different, but these mints could help you eat just one cookie for dessert instead of going back for seconds–which is the goal, according to Pasternak.

“It’s not about a zero sugar lifestyle,” he says. “It’s helping to take back control of sugar cravings.”

However, Liz Weinandy, R.D. at Ohio State University, warns these may not offer a long-term solution.

“It’s just like giving people pills for pain relief,” she says. “They do not help to take care of the problem.”

“I would drink those [soda] back-to-back like water,” he tells Men’s Health. “When I ran out of one I would go to the fridge and grab another.”

Now, he drinks one or two diet sodas a week. Combined with a well-balanced diet and exercise, Baker has lost 30 pounds in two months.

In the beginning, Baker consumed about five mints a day to manage cravings. Now on his third kit, Baker only uses SweetKick occasionally.

“I don’t need the mint anymore. he says. “Now, I’m starting to notice how bad it [sugar] makes me feel. The mints are sitting on top of my fridge just in case.”

That’s not to say that everyone will experience the same success. Langer says people who frequently overeat sweets may have deeper problems that need to be addressed.

“You could be over eating for comfort or stress relief,” she explains. But she believes SweetKick may help you regain some control over cravings. “It’s a tool. You should have more in your toolbox than just this,” she says.

Gauging from the SweetKick website, customers hope this is the answer to squashing their sugar habit: the kit is sold out until January 2020.