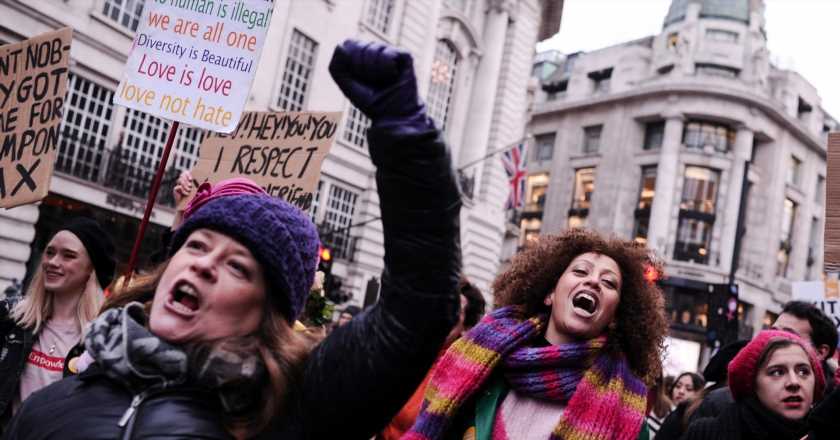 This is the most important issue facing UK women right now

Early results of a major survey by Women’s March Global highlight what women in the UK see as the biggest barriers to equality.

Women in the UK see violence, harassment and abuse as the biggest impediment to progress on gender equality, according to new research shared exclusively with Stylist for International Women’s Day.

Women’s March Global is currently conducting an international survey that aims to pinpoint the most important issues facing women and gender-diverse people around the world.

Early insights from the ongoing poll suggest that women and non-binary people in the UK are most concerned by gender-based violence, harassment and abuse. So far, over half (57%) of UK-based survey respondents have described this as one of the “most critical” issues for them as a person.

Women’s March Global grew out of the feminist protests that took place around the world on the day of Donald Trump’s presidential inauguration in 2017. Now a network of more than 100 chapters with thousands of members worldwide, the organisation says its Global Count poll is one of the largest international mapping surveys ever undertaken to hear from women about the barriers to their progress.

After violence, harassment and abuse, women and gender-diverse people in the UK were most likely to say that environmental justice (37%) was one of the most important issues to them. Racial equity was the third most popular response, with over a third (35%) of respondents identifying it as a key concern.

“Our voices aren’t being heard”: why we need a pandemic exit strategy that works for all women

The Global Count survey has reached 152 countries since launching in January, with most results coming from the Global South. Worldwide, 67% of respondents said that ending violence and abuse against women was a critical issue for them.

The survey results so far also shine a light on how issues of inequality could be challenged. Data shared exclusively with Stylist shows that most UK respondents believe “cultural and social issues” – such as norms, traditions and religion – are the driving force behind gender-based violence and racial inequity.

In a statement, Women’s March Global said this indicates that changing “hearts and minds” is an essential part of tackling inequality.

“The response to the survey so far has been really promising,” said Betsy Scolnik, board chair of Women’s March Global.

“We’re seeing differing trends across countries and continents but there is one resounding message coming from womxn everywhere; ending violence, harassment and abuse is the most critical issue facing women and gender-diverse people, no matter if in Zambia or in the UK.”

The Global Count poll is being distributed in partnership with charities and organisations including CARE International, Girl Up and Global Fund for Women. The goal is to directly address the problems caused by a lack of solid data around women’s rights.

“We hope that once we have the data collected, results from the Global Count can help direct funds and programmes to [grassroots movements], and to help have more impact when it comes to reaching an equitable future for all,” said Scolnik.

To take part in the Global Count poll, visit womensmarchglobal.org