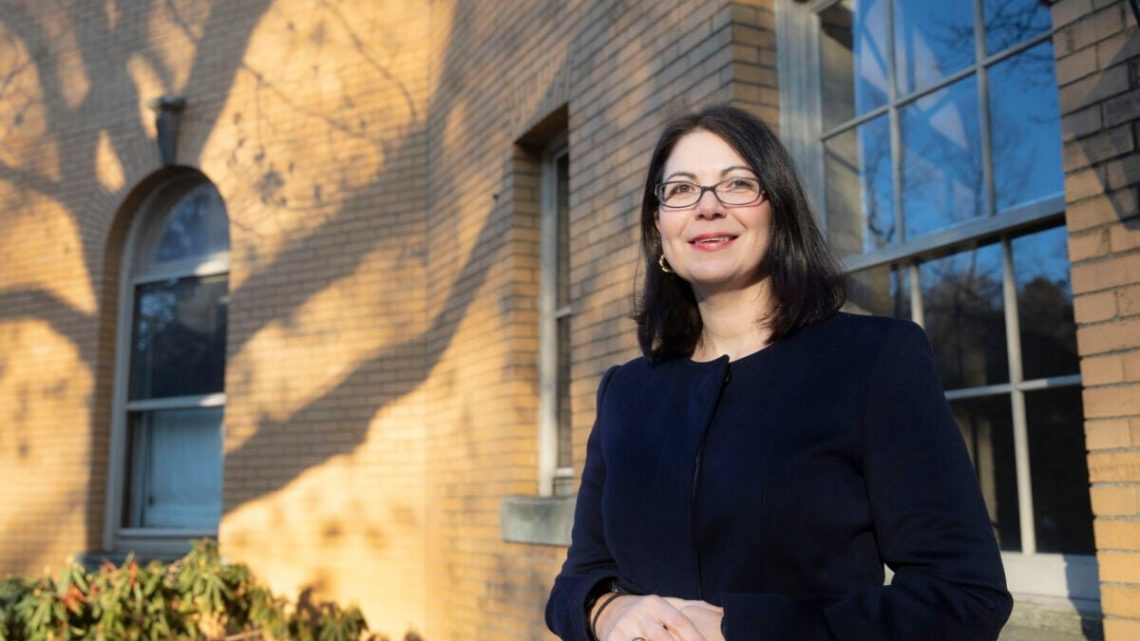 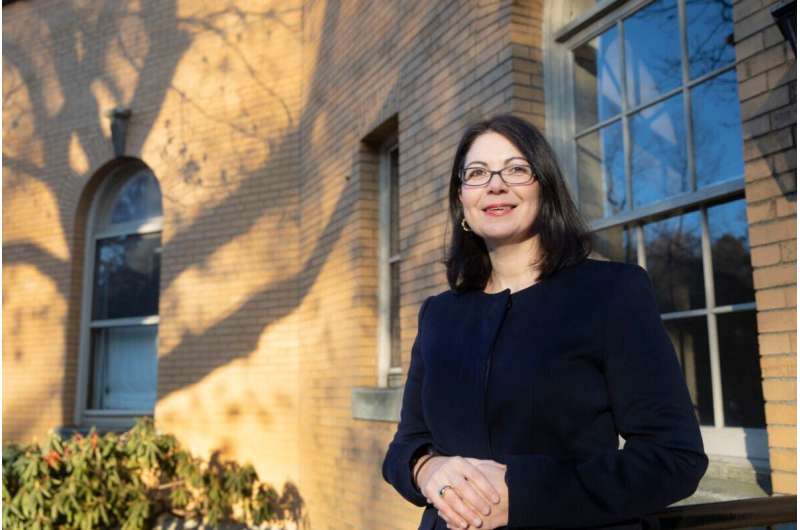 Researchers at Harvard Medical School and Massachusetts General Hospital are hot on the trail of elderly “super-agers”—whose sharp memories avoid typical age-related declines—in an attempt to study whether there are interventions that can improve prospects for the rest of us. Assistant Professor of Neurology Alexandra Touroutoglou, director of imaging operations at MGH’s Frontotemporal Disorders Unit, and colleagues have conducted several studies on the subject. Last summer they published results that tracked one root of super-agers’ performance to a brain region responsible for visual processing, using functional MRI to watch the visual cortex in real time. Besides Touroutoglou the group included Bradford Dickerson, director of the Frontotemporal Disorders Unit; Lisa Feldman-Barrett, a senior investigator in psychiatry; Joseph Andreano, an instructor in psychiatry; and Yuta Katsumi, an instructor in neurology. Touroutoglou spoke to the Gazette about the latest advances and a new study getting underway to test whether a neurostimulation intervention can restore function in those experiencing age-related decline. This interview was edited for clarity and length.

GAZETTE: What happens to the normal brain as it ages and how does that manifest in everyday life?

TOUROUTOGLOU: As we age, there’s a certain amount of atrophy that happens in our brains. It is not enough to be pathological, but it does affect our cognitive abilities, how we perform on memory and other cognitive tasks. As we age, we also lose the efficiency with which brain regions communicate with each other and that affects our ability to perform a cognitive task.

GAZETTE: When we talk about cognitive tasks, what kinds of things are we talking about?

GAZETTE: And we’re not talking here about dementia, Alzheimer’s disease, but what we associate with older people perhaps being a little forgetful?

TOUROUTOGLOU: Memory problems are part of it. Also, older people sometimes have difficulty focusing on a task: attention, focus, multitasking, all those complex cognitive tasks that as we age, we often become less efficient doing.

GAZETTE: And how are super-agers different?

TOUROUTOGLOU: That memory decline is common, but not inevitable; we found that super-agers defy this age-related decline in brain power. Somehow they manage to avoid the brain shrinkage, avoid the disruption in communication between brain regions important for memory. And their memories are as strong as those of young adults.

GAZETTE: Do we know whether these super-agers are also super-agers physically? We hear about people who seem to avoid other aspects of physiological decline and the diseases of aging.

TOUROUTOGLOU: We haven’t measured that yet, but it is an interesting question. We have some findings—in a paper that hasn’t been published yet—that show that super-agers are resilient to some other types of physiological stressors that commonly affect cognition. So while we haven’t asked that question, there is evidence that shows that a more resilient brain might help them be resilient to other kinds of stressors.

GAZETTE: How common are super-agers?

TOUROUTOGLOU: Not very common. We believe it’s a rare phenomenon, but I don’t think we are at a point yet where we can make an accurate estimate. What we need is more large-scale, multisite epidemiological studies that can show that more precisely.

GAZETTE: You’ve done some earlier studies on super-agers that led up to this most recent work. Could you tell us about those studies and what you found?

TOUROUTOGLOU: In our first study, we used conventional MRI and compared super-agers to typical older adults to identify a brain signature for super-agers. The first thing we did was to look at the structure of the brain, and we used structural MRI to measure atrophy in those brain regions involved in memory. We asked the question: Do super-agers resist age-related atrophy? What we found was that when compared to their peers, super-agers have a thicker cortex. That’s not in just a few regions, it’s throughout the cortex, and not only in regions that are traditional memory regions, but also regions important in other functions that contribute to memory, such as attention or executive function. We found that when we looked at the traditional memory regions, the MRI images showed that super-agers have larger hippocampal volume than appears in typical older adults. When we measured the volume of the hippocampus, or the thickness of the cortex, we saw that this predicted the memory abilities of super-agers. The greater the thickness, the larger the volume, the better they did on memory. So that was our first study. But the structure of the brain is not the whole story. We know that brain regions are not isolated islands, so we looked at the brain functional connectivity and how brain regions that are important for memory are communicating with each other. We asked the question: If super-agers defy the age-related decline in atrophy, do they also resist the decline in communication between brain regions that happens in normal aging?

GAZETTE: And what did you find?

GAZETTE: So that brings us to the most recent study, when you looked at them in real time using functional MRI?

TOUROUTOGLOU: In the current study, we put participants in the scanner and paid close attention to the visual cortex.

GAZETTE: Why the visual cortex?

TOUROUTOGLOU: The visual cortex, we know from memory literature, is involved in a very important mechanism of memory. It includes a population of neurons that are selectively involved in processing different categories of images—a group of neurons is selectively activated in response to faces, another group activates in response to scenes. So there is selectivity. And this selective function makes you more efficient at processing what you see. And learning in this selective way helps to create a distinct memory that can be more easily retrieved later on. We know that this selectivity is called neuronal differentiation, and we know that the selective function of the neurons in the visual cortex diminishes as we age. That means that the group of neurons that once responded primarily to faces is now activated in response to other stimuli as well, so you have difficulty in creating the unique pattern I mentioned earlier.

GAZETTE: So the groups of neurons are not dedicated, or at least not completely dedicated, to these specific functions anymore, and this degrades this process you just described—distinct processing, distinct memory, easy recall—and everything gets harder?

GAZETTE: So you’ve watched what happens, and what did you see?

TOUROUTOGLOU: We found that the super-agers’ brains’ visual cortices maintained youthful activity patterns. They had the same high level of differentiation as a young adult, which enabled them to create distinct representations more efficiently and then remember better than typical older adults.

GAZETTE: Do you feel like you’ve gotten to the bottom of this or are there other parts of the brain that may also be involved and which have similar processes going on?

TOUROUTOGLOU: We’re trying to piece together the puzzle about what makes some people super-agers, but it’s definitely far from complete. We recently got funding to pursue additional questions on super-agers, to get into the neural causal mechanism of what makes someone a super-ager.

GAZETTE: Do we know whether this is genetic or environment or some mix of both?

TOUROUTOGLOU: Almost certainly it’s a mix of both. A question we are very interested in is this: Even if you didn’t start out with superior memory abilities—because of your genetics—how can you preserve the memory and cognitive abilities that you’ve always had so that you can avoid typical age-related decline?

GAZETTE: As you’re understanding it more, might this lead to interventions? You have a study going on now or you’re thinking of a study?

TOUROUTOGLOU: We have a study going on now. From the super-agers’ work, we know that a particular brain region is not specific to memory but contributes to it in important ways through maintaining effort in challenging tasks: the anterior midcingulate cortex. The study is a clinical trial using noninvasive brain stimulation that induces neuroplasticity. The hope is that inducing neuroplasticity will improve the function of this brain region and, by strengthening the function of this brain region, we expect to see improvement in cognition. We’re targeting a brain network that is important for memory in typical older adults to see whether we can actually improve their abilities, mitigate their memory decline, make them super-agers.

GAZETTE: Tell me about the part of the brain that’s involved in this study.

TOUROUTOGLOU: We’re targeting the key super-aging region, the anterior midcingulate cortex. It is a region that we and others have seen as being thicker in all super-agers. This is an important region because it’s not just an additional memory region, it integrates information from different parts of the brain. It is important for attention, for executive function, for motivation, for all of these processes that contribute to persistence when things get difficult. We had another study in which we talked about this region as being “the tenacious brain.” So by stimulating this region, we hope to increase all those factors that contribute to superior memory. We’ll do fMRI both before and after stimulation, because we want to see whether it does indeed increase these “tenacious” functions of the brain.

GAZETTE: Do you have super-agers in your family?