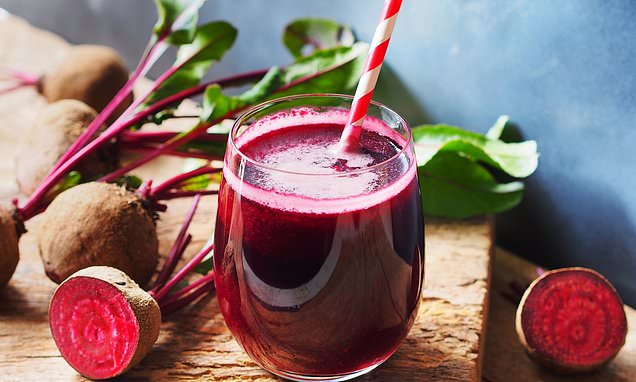 If protein shakes or pre-workout drinks don’t agree with your stomach, you’re in luck.

Vegetables such as beetroot are rich in nitrates, a chemical that can dilate blood vessels raising oxygen levels in the body and boosting endurance.

Coffee is another powerful stimulant that can aid workouts by stimulating the central nervous system and giving you more energy.

In the latest study, experts from Exeter University in the UK recruited ten healthy men who were in their early 20s.

They were asked to follow a diet low in nitrates — a plant compound made of nitrogen and oxygen used by plants to help them grow — for three days before starting the experiment.

They were then divided into two groups, with half receiving a pre-workout drink of  4.7 fluid ounces (fl.oz.) of deionized water that had a nitrate powder dissolved into it — which researchers said was equivalent to beetroot juice.

The rest were given a placebo drink containing a dummy powder. Both groups were unaware whether they had been given the real thing.

The drinks were indistinguishable in appearance, smell and taste the researchers said.

Scientists have found short bursts of intense physical activity could extend the lifespan of a healthy brain and delay cognitive decline.

Participants then completed a single exercise three hours later, after a warm-up.

The movement saw the participants contract their quadricep muscles — the large muscle at the top of the upper leg — 60 times while their dominant leg was attached to the lever of a machine. They had to contract the muscle without moving the leg during the experiment.

Using electrical pulses, researchers measured muscle force, or the force applied by the muscles when they contracted.

They found it was seven percent higher in people who got the nitrates, compared to those who did not.

Muscle biopsies were also collected from the leg after consuming the drink, and before and after the exercise to check nitrate levels in the tissue.

Scientists found higher nitrate levels in the muscles of people who had received the nitrate drink compared to those who had not.

In the body, nitrates can help dilate blood vessels boosting the amount of oxygen reaching muscles.

But scientists say they may also be able to help muscles contract by affecting how they use calcium, which is required by muscles for contraction.

Nitrates are needed in muscles to help their mitochondria — energy factories in cells — release energy for contraction.

Boosting these levels, the scientists suggested, led to more energy being available.

Dr Barbara Piknova, a staff scientist at the National Institute of Diabetes and Digestive and Kidney Diseases in the US, said: ‘This study provides the first direct evidence that muscle nitrate levels are important for exercise performance, presumably by acting as a source of nitric oxide.

‘These results have significant implications not only for the exercise field, but possibly for other medical areas such as those targeting neuromuscular and metabolic diseases related to nitric oxide deficiency.’

Dr Andy Jones, a physiologist at the University of Exeter, said: ‘Our research has already provided a large body of evidence on the performance-enhancing properties of dietary nitrate, commonly found in beetroot juice.

‘Excitingly, this latest study provides the best evidence to date on the mechanisms behind why dietary nitrate improves human muscle performance.’

Their study was published in the journal Acta Physiologica.

What foods are high in nitrates?

Our muscles need nitrates when we exercise to help them respire, or release energy.

This helps to power the mitochondria — the energy factories in cells — thereby boosting the energy available for contractions.

Scientists suggest that the more nitrates we have available, the better our exercise will be.

Foods that are high in nitrates include:

Certain meats can cause ‘profound’ loss of vision – expert