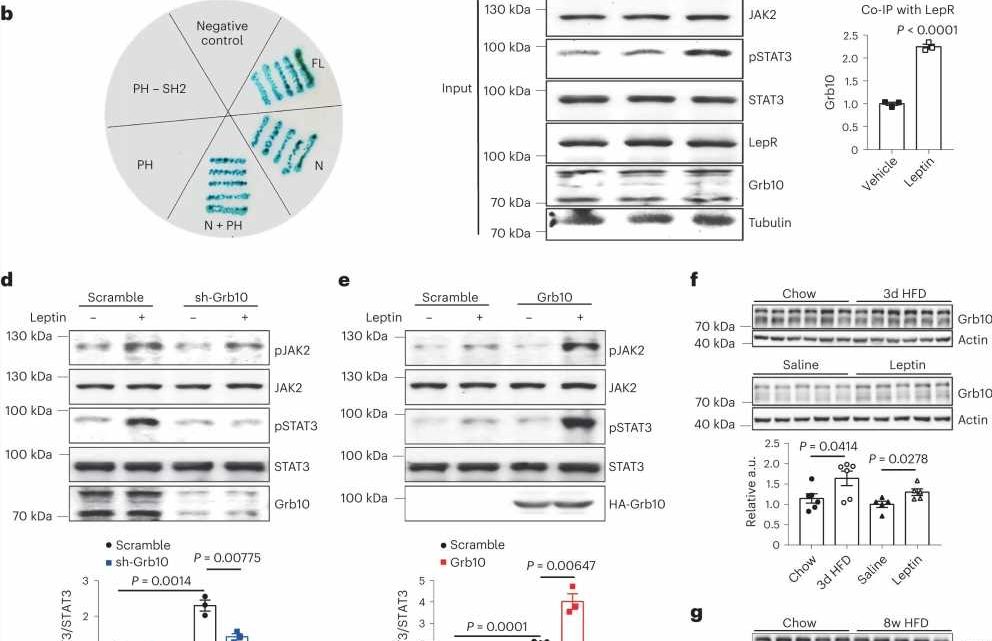 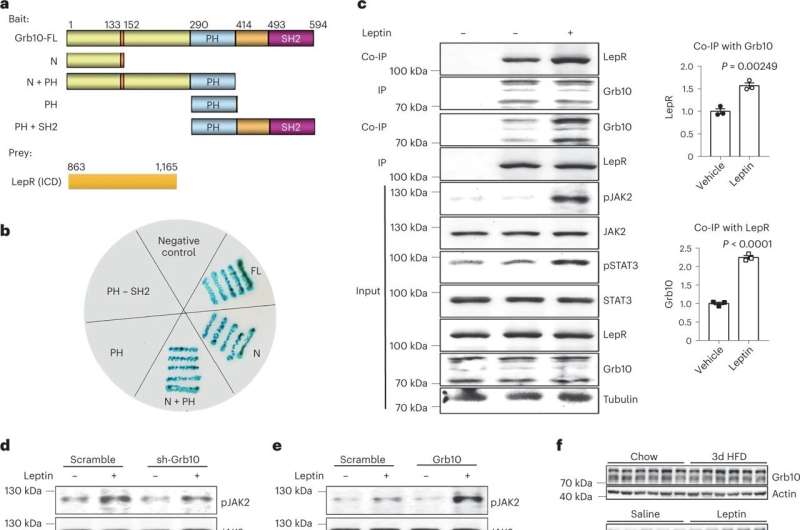 For many people, keeping a healthy body weight can be a challenge. According to the Centers for Disease Control and Prevention, among adults 20 years old and over, the prevalence of obesity is 42% in the U.S. Obesity-related conditions, including heart disease, stroke, type 2 diabetes and certain types of cancer are among the leading causes of preventable, premature death.

Looking to find strategies to help people reach and maintain a healthy weight, researchers at Baylor College of Medicine, the Second Xiangya Hospital of Central South University-China and the University of Texas Health Science Center at San Antonio investigated how the activity of the hormone leptin, which is involved in controlling appetite and energy expenditure, is regulated. Working with mouse models, the team discovered that the protein Grb10 promotes leptin activity in the brain, opening the possibility of developing Grb10-based new approaches to treat obesity. The study appears in Nature Metabolism.

One way the body controls its weight is with leptin, which is produced by fat tissue. The more fat tissue the body has, the more leptin it produces. Leptin travels to the brain, where it informs specialized neurons of the amount of fat stored in the body. Large amounts of leptin tell the brain there is a large fat storage. In response, the brain triggers behaviors that suppress appetite and increase energy use, which lead to a reduction of fat tissue and weight loss. When all works well, this leptin-mediated feedback loop between the fat tissue and the brain results in sustained healthy body weight.

“Leptin’s ability to prevent excessive body weight gain by inhibiting appetite and simultaneously enhancing energy expenditure made it a promising therapeutic approach to treat obesity,” said co-corresponding author Dr. Yong Xu, professor of pediatrics—nutrition and molecular and cellular biology at Baylor. “Unfortunately, leptin supplementation strategies often turned out to be ineffective in most cases of diet-induced obesity, partly due to the development of leptin resistance, a state in which circulating leptin level remains high but it fails to suppress food intake and body weight gain.”

In the current study, Xu and his colleagues looked for molecules that would regulate leptin activity and could potentially be used to overcome leptin resistance. The team discovered that the protein Grb10 is a new regulator of leptin activity.

“We found that Grb10 promotes leptin activity,” Xu said. “One feature of Grb10 that separates it from previously discovered leptin regulators is its mode of action. Grb10 binds directly to the leptin receptor on neurons, forming a complex. The binding enhances leptin signaling and helps decrease food intake and increase energy expenditure. Other regulators do not bind to the leptin receptor but to other molecules downstream.”

After eliminating Grb10 in leptin-responsive neurons in the brain of mice, the animals ate more or reduced energy expenditure and gained weight. Increasing Grb10, on the other hand, had beneficial effects—it helped animals decrease food intake, increase energy expenditure and lose weight. “These results suggest that enhancing Grb10 activity may provide a means to increase leptin signaling and help lose weight,” Xu said. “Our findings support further investigations into the possibility of developing a Grb10-based treatment for obesity.”

Going forward, the team is interested in further investigating Grb10’s mechanism of action in the brain. “Leptin also can regulate mood and other emotional states,” Xu said. “We want to know whether Grb10 is involved in regulating mood via interaction with leptin receptor.”

Experts sceptical that China travel curbs will be effective