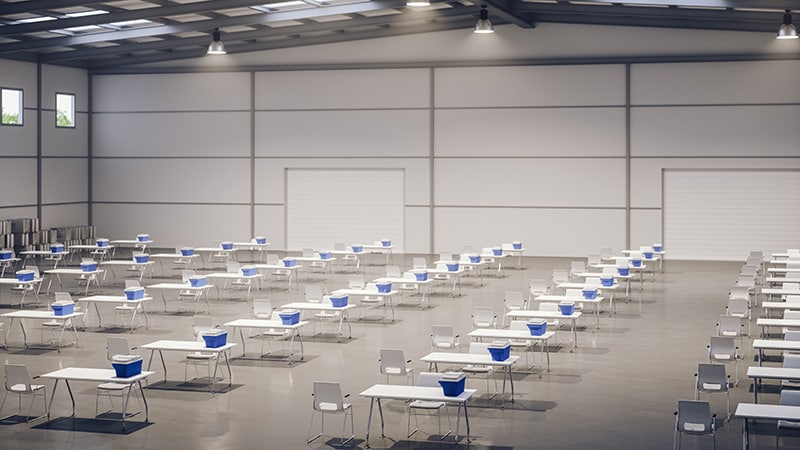 LISBON — Portugal, which leads the European Union in immunization against COVID-19, with an estimated 85% of its population currently vaccinated, has started to look at closing mass vaccination sites.

No date has yet been set for the shutdown, said Henrique Gouveia e Melo, an officer of the Portuguese Navy and coordinator of the country’s immunization task force, but several cities confirmed that they are assessing the demobilization of major vaccination centers, according to a report in Público.

The main objective of the shutdown is to transfer the vaccination process, currently conducted in dedicated facilities that just administer COVID vaccines, to the National Health System (SNS) network of health centers, which has national scope. But the plan could change if health authorities recommend the mass administration of a booster dose.

The SNS already covers most of the expenses associated with the dedicated centers, although some municipalities had to hire healthcare professionals and additional support teams.

The demobilization of the vaccination center in the city of Gondomar’s multipurpose pavilion, which was the first major vaccination facility set up in Portugal, “is already being prepared,” Mayor Marco Martins told Público. If the estimated vaccination coverage is accurate, the immunization campaign should be transferred to SNS health centers by the end of September, he said.

Of the two major vaccination centers in coastal resort region of Cascais, near Lisbon, one is not currently in operation but remains ready to be reactivated, if needed.

And major vaccination centers in Loures, also in the greater Lisbon region, could be closing soon, according to the regional authority, but no details have been released.

In most cases, municipal officials are waiting for clear instructions from national authorities. The seven vaccination centers in Lisbon remain open for now.

Because the third dose of the COVID vaccine will likely be recommended for just a small group of people, SNS health centers should be able to handle the boosters, Gouveia e Melo said in a statement to journalists.

The recommendation that people older than 16 years who are immunocompromised receive a third booster dose was announced on September 1 by Portugal’s Directorate-General of Health (DGS).

This group includes people who were immunized during “a period of severe immunosuppression,” such as organ transplant recipients, HIV carriers with low lymphocyte counts, people undergoing cancer treatment, and people with autoimmune diseases. In such cases, the third dose of the vaccine “should be administered under the guidance and prescription of the attending physician.”

The booster must be administered at least 3 months after the second dose, and only applies to the Pfizer or Moderna mRNA vaccines, according to the DGS.

This article originally appeared in the Portuguese edition of Medscape.

The quality, not quantity, of cardiovascular fat can interfere with memory later in life