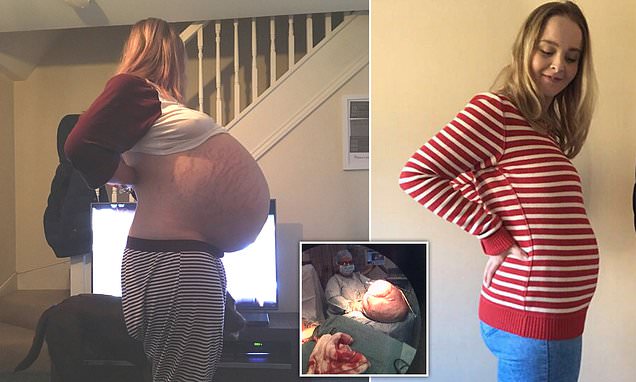 PICTURED: Woman who had a FOUR STONE cyst removed

Keely Favell, 28, from Swansea, was told by doctors that she was pregnant – but three tests came back as negative.

She played along with well-meaning questions from friends about her baby due date, by pretending she was expecting.

For all Ms Favell knew she was simply piling on the pounds. In fact, the truth behind her creeping weight gain was far more sinister.

Unbeknown to Ms Favell and oblivious doctors, her burden was really a massive ovarian cyst weighing the same as seven newborn babies. 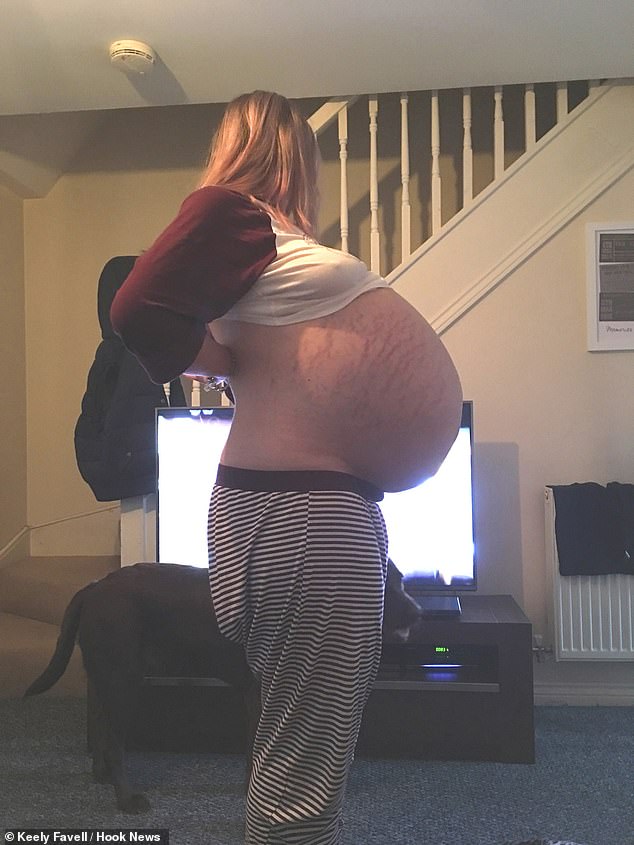 Keely Favell, 28, of Swansea, assumed she was slowly putting on weight when three home pregnancy tests came back as negative

Ms Favell, who shed a third of her bodyweight having the mammoth growth removed under surgery, said: ‘I lost sight of how difficult even simple things like driving a car or walking up the stairs had become.

‘Losing my lump gave me my life back – I can’t thank my surgeon enough.’

Ms Favell started gaining weight around 2014, but blamed her changing body shape on her physique.

She said: ‘I’ve always been chunky, but over the course of a couple of years, I gradually got this tummy.

‘I couldn’t understand it – I was exercising and eating healthily, but I was slowly getting bigger and bigger.

‘It crept up so slowly that I didn’t know anything was wrong – I just thought I was putting on timber.

‘I’ve been with my partner Jamie Gibbins for ten years and we did wonder a few times if I was pregnant – but we did home tests and they always ruled it out.’

After blacking out at work in her office admin job in the summer of 2016, Ms Favell plucked up the courage to see her GP.

She had no idea the fainting spell was linked to her inexplicable weight gain, and doctors dismissed it as a side-effect of skincare drugs.

‘It was a tough period in work, and when I passed out in the office, my GP first put it down to stress,’ she said.

She had the ‘large ovarian mass’, which she nicknamed Mr Whippy, removed in March, four years after it began to grow (pictured two weeks after surgery)

‘My blood tests came back clear and when I fainted again, this time I was told it was probably a side effect of acne tablets I’d been prescribed – but that didn’t make sense because I’d stopped taking them six months previously.

‘My GP didn’t even attempt to examine me. I was sat there with a big coat on, so I unzipped it, pointed to my belly and said ‘could it be anything to do with this?’

Ms Favell told how her GP insisted she must be pregnant, despite her blood tests having ruled out looming parenthood.

She said: ‘Looking at me, anyone would have thought I was nine months gone. It wasn’t the first time I’d been mistaken for an expectant mum, but my GP had the test results and should have known better.

‘People had seen me waddling around, carrying this lump, and I’d been asked a few times when I was due.

‘It was so embarrassing trying to explain that I was – or, so I thought – just fat. I’d go along with it to spare everyone the blushes.

‘I remember trying to shop for clothes for Christmas party season in December 2016, and nothing would fit. I was skin and bone on top, then had this massive lump and normal legs below.

‘I was trying to buy big to cover up the lump but nothing looked right on me.

‘Everything I bought ended up going back to the shop. I was probably looking in the wrong place because in reality the only thing that was going to fit me was maternity wear.’

Convinced that Ms Favell was due to have a baby, her GP referred her for an ultrasound scan at her local hospital. 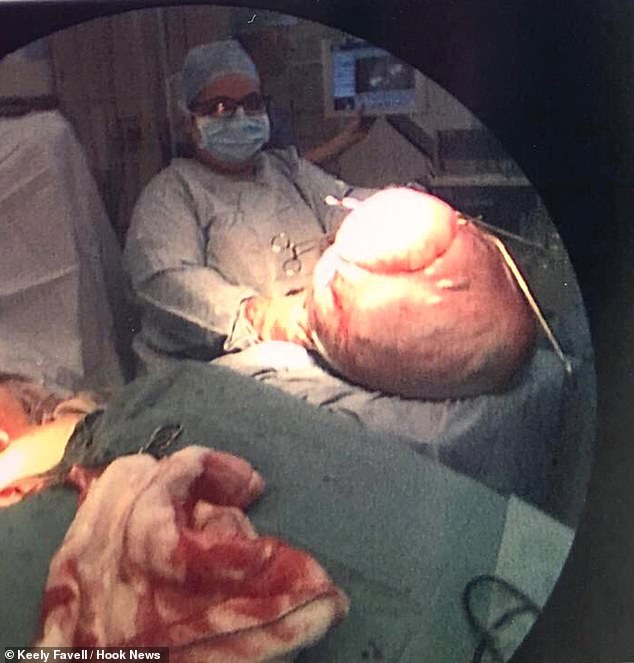 With newborns averaging 7lb 7oz, Ms Favell’s benign cyst – it was not cancerous – weighed the same as septuplets (pictured: the cyst after it was removed) 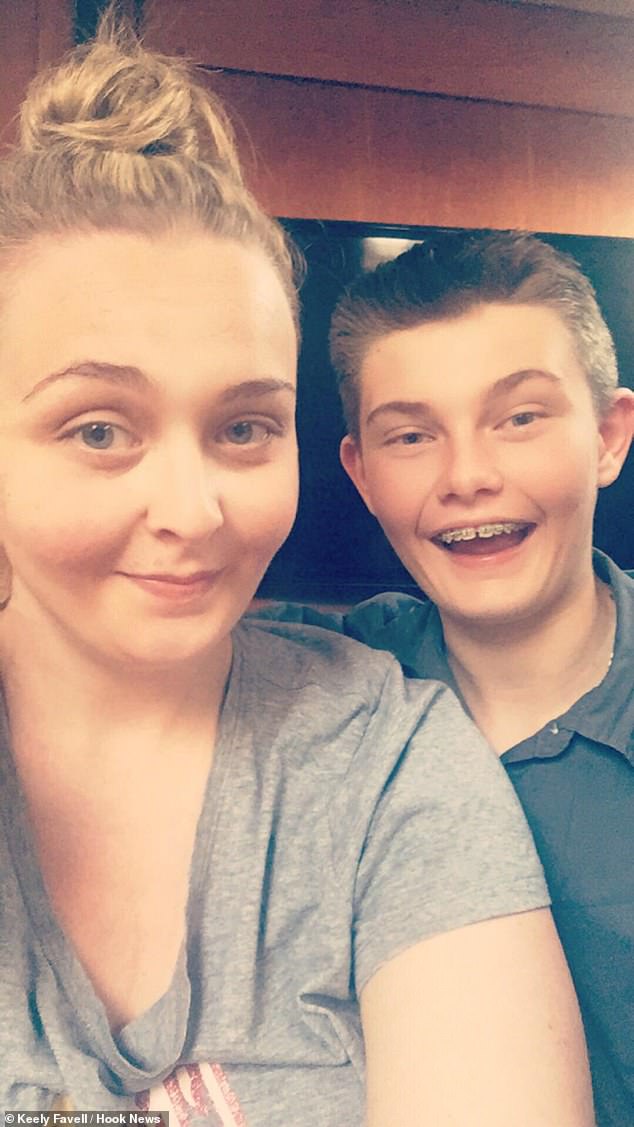 Ms Favell started putting on weight on in 2014, but when tests revealed she was not expecting, she assumed she was getting fat and was reluctant to see a doctor (pictured with her brother Adrian, now 19, in June 2016)

But instead of a heartwarming image of a wriggling new life, Ms Favell was presented with an ominous black screen.

She said: ‘By the time I had the appointment it was January last year.

‘I was lying there with Jamie beside me as the radiologist moved the probe over my tummy. I saw her eyes widen in horror, but the screen was just blank.

‘The look on her face said it all – something was wrong, and when she said she had to get a consultant I started to panic. Jamie did his best to reassure me but I felt paralysed with fear.’

The consultant sent Ms Favell for an emergency CT scan which revealed a cyst surrounded by fluid.

‘He told me I wasn’t fat all – I was actually quite thin,’ she recalled. ‘But he said I had a 25cm-thick sac of fluid in my belly region.’

Ms Favell was referred to a high risk obstetrics consultant and examined in February last year.

‘By this time, even walking was a struggle and I had difficulty breathing,’ she said. ‘I was a terrible driver because I could barely fit behind the steering wheel of my car.

‘I’ll never forget the look of shock on his face when the consultant examined me. He said I had a large ovarian mass and the only option was surgery. 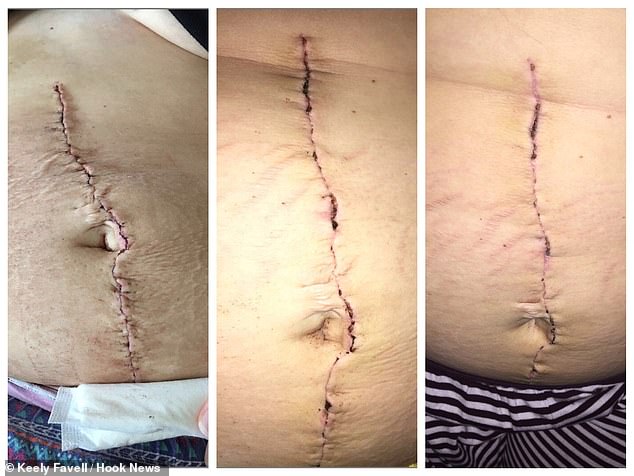 ‘He couldn’t say what it was, exactly, or how big. He warned me there might be more than one, and they could be attached to other organs.

‘Agreeing to the surgery, I felt like I was signing my life away because, until they opened me up, no one knew for sure what they would find.

‘My parents were working overseas in Australia at the time and I’d been dreading telling them what I was going through. They were 10,000 miles away and there was absolutely nothing they could do to help.

‘Of course, when I eventually told my mum, Rachelle, she was on the first plane over.

‘As soon as she saw me, she burst into tears – she hadn’t seen me since the previous August and the change my body had undergone came as a massive shock.’

As Ms Favell waited four weeks for surgery, her stomach swelled another agonising 5 inches, she weighed in at just over 20 stone, and she was signed off work with ill health.

She finally went under the knife at Swansea’s Singleton Hospital in March last year.

What she hoped would be a routine, hour-long procedure turned into a five hour marathon as her surgeon removed a giant cyst weighing an incredible 26kg.

With newborns in the UK tipping the scales at an average of around 3.5kg, Ms Favell’s cyst – which tests later revealed was benign – weighed the same as septuplets.

She said: ‘To put it another way, it weighed as much as a seven or eight-year-old child. 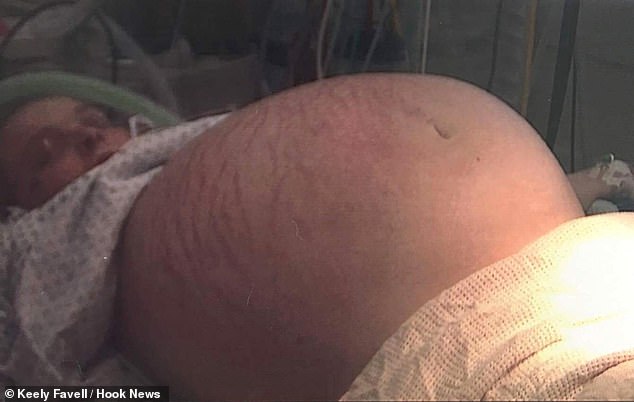 After doctors ruled out pregnancy and a side effect from medicines she had stopped taking six months earlier, they sent her to the hospital for an ultrasound in January 2017

‘I remember still being groggy from the anaesthetic as they wheeled me back to the ward, and excited hospital staff were shoving photos in front of me.

‘I didn’t really understand why until I came round properly and everyone was treating me like a minor celebrity!

‘Then they explained how big this cyst was and showed me the pictures – I couldn’t believe I’d been walking around for so long carrying this medical alien.

‘It looked like a massive pile of ice cream so I called it Mr Whippy!’

Ms Favell was left with a 30cm scar snaking from her sternum to her pelvis.

But soon after the op she was back on her feet and she returned home after just four days.

She said: ‘I was sore, but walking around felt absolutely amazing! I felt like I was floating!’

Removing Ms Favell’s cyst cost her her right ovary, but doctors say her chances of becoming a mum are unaffected.

In the meantime, she’s getting used to one unwanted and long-lasting side effect of pregnancy that all new mums dread.

‘At 28 years old and even though I’ve never been pregnant, I’ve been left with stretch marks,’ she added. 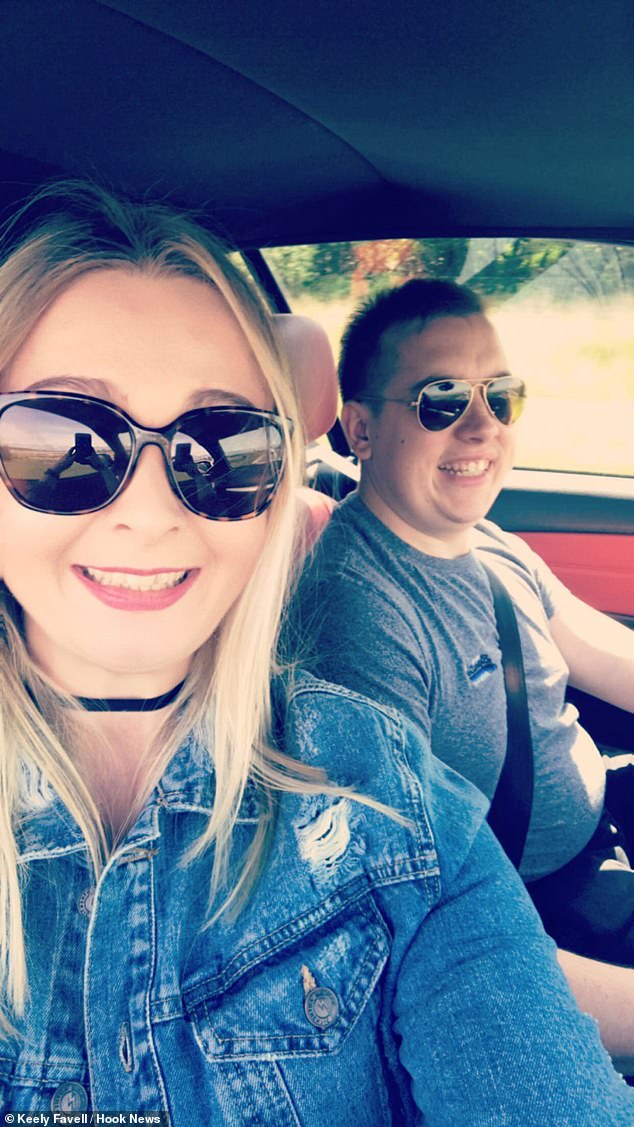 Her swollen stomach drew questions from strangers about a due date, which Ms Favell, who has been with partner Jamie Gibbins for 10 years, went along with to spare embarrassment (pictured with her boyfriend) 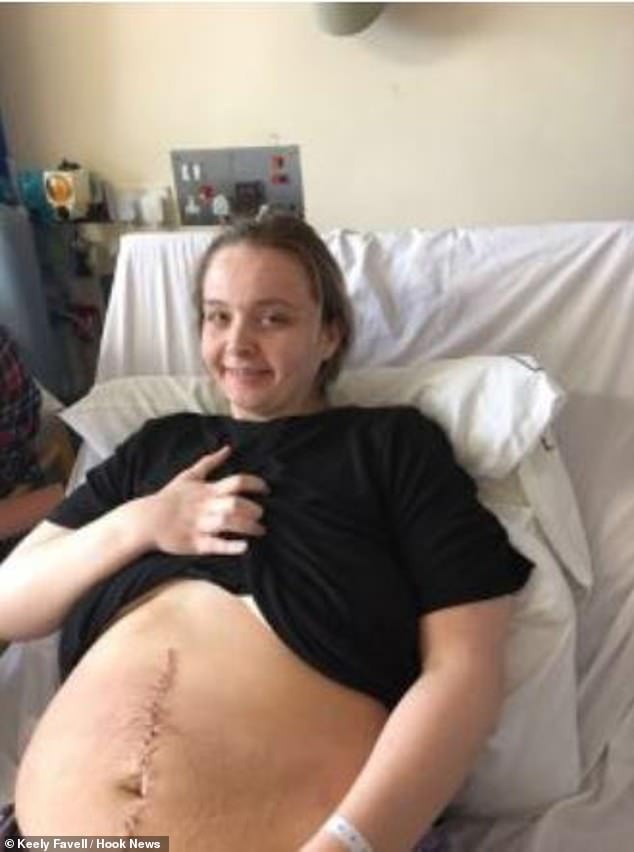 WHAT ARE OVARIAN CYSTS?

An ovarian cyst is a common condition in which a fluid-filled sac develops on a woman’s ovary.

They often do not cause any symptoms and disappear on their own, but can be caused by a more serious underlying condition such as endometriosis.

But if they do not and are not seen by a doctor they have the potential to grow out of control.

Symptoms can include pelvic pain, pain during sex, a change in periods, needing to urinate more often, and bloating.

The two main types of ovarian cyst are functioning cysts and pathological cysts. Functional cysts – the most common type – develop as a normal part of the menstrual cycle and are usually harmless and disappear quickly on their own.

Pathological cysts are ones which form because of abnormal cell growth, and are much less common.

The vast majority of cysts are non cancerous (benign), but some can be cancerous – malignant cysts are more common among women who have been through the menopause.

It’s hard to know how many women get ovarian cysts because many disappear without ever having been noticed, but many women will have one at some point in their life.

Sleep deprivation can have a negative impact on ethical decision-making, says expert