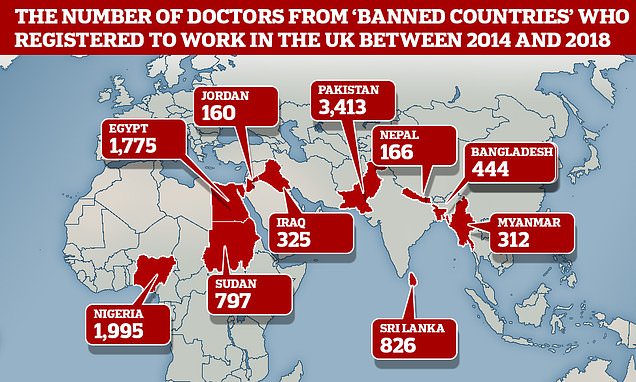 One in four new doctors come from countries ‘banned from working for the NHS’: Experts warn hospitals are ‘so desperate they recruit from nations that are short on medics’

One in four new NHS medics come from countries that are ‘banned’ from working for the health service, figures have revealed.

The NHS’ Code of Practice lists 97 nations that ‘should not be actively recruited from’ because they receive aid or suffer from a shortages of medics.

But an investigation has shown certain NHS trusts have used agencies to recruit staff from these prohibited nations, which include Egypt, Pakistan and Sri Lanka.

And the number of doctors joining the NHS from these countries has doubled in the past two years, the figures show. 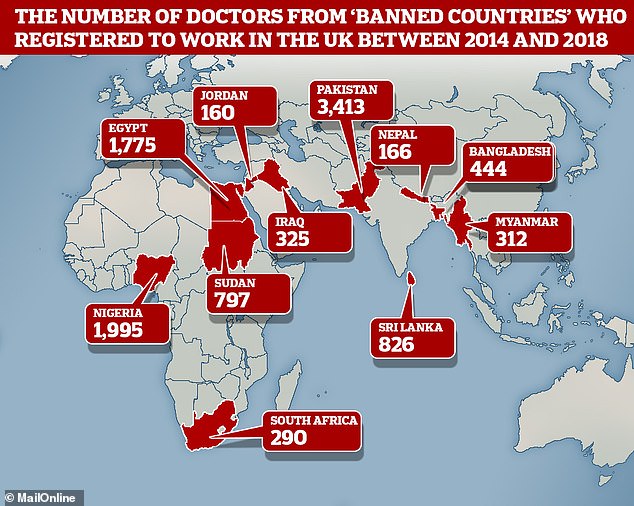 Map reveals the number of doctors who registered to work in the NHS between 2014 and 2018, and lived in countries the health service is prohibited from ‘actively recruiting from’

Richard Murray, chief executive of the King’s Fund, worries the NHS is too desperate to check if recruitment agencies are ‘ethical’.

He told The Telegraph: ‘The workforce shortages in the NHS mean it does need international recruitment but it needs to be done ethically.

‘Increases on this scale from these countries are going to bring the UK into disrepute.

‘I think organisations are so desperate to get staff they just aren’t checking whether it is done ethically.’

General Medical Council figures reveal 4,161 doctors registered to work in Britain last year despite coming from countries that should not be recruited from.

In the past five years, more than 12,000 registrations took place from nationals of these regions.

And now 27 per cent of all new doctors working in the NHS are said to have come from ‘banned’ countries, compared to just 13 per cent in 2014.

However, some of these individuals may have applied to work in the UK off their own backs rather than being actively recruited.

Concerns ‘banned countries’ are being exploited come as NHS officials prepare to launch a global recruitment drive to fill vacancies.

JUST HOW MANY NHS WORKERS ARE LEAVING THE HEALTH SERVICE?

An ongoing recruitment crisis has struck all aspects of the NHS and reached unprecedented levels.

Experts warn frustrated medics are fleeing the health service in their droves because of funding issues, relentless pressure and even Brexit.

Figures released earlier this year showed 33,000 nurses in England quit in 2017 – around one in ten posts. It is the first time there have been more leavers than joiners in the profession.

And official figures show that 41 per cent – around 10,000 doctors – are 50 or over and are expected to quit within the next five to ten years.

Estimates suggest the NHS needs 190,000 more staff overall by 2027 in order to meet the demands of a growing and ageing population.

But the Health Education England, the body responsible for the NHS’ workforce, warned in December only 72,000 new staff could be expected to join the service in the next 10 years.

The NHS staffing crisis is so critical it cannot be fixed by training more doctors and nurses alone, according to a major report in March.

Shortages of GPs in England will almost triple to 7,000 and double in nursing to 70,000 within five years unless action is taken.

Despite the Government vowing to create 5,000 additional GP posts by 2020, recent figures suggest a further shortfall of 1,300 full-time family doctors has developed.

Many are choosing go abroad for better lifestyles, while high numbers are a retiring early to avoid hefty taxes that kick in when their pension pot exceeds £1million.

In the past six years, the number of nurses leaving has grown by 25 per cent and one in nine staff left the NHS in 2017/18.

One NHS recruitment firm Remedium Partners boasts of placing 900 permanent medics from more than 60 countries into the NHS.

But the company has been accused of targeting doctors in Nigeria and Myanmar, as well as running events in Egypt and Bangladesh.

Its social-media sites also claim it is planning to visit Pakistan, The Telegraph reported.

Remedium said eight medics from Myanmar reached out to them and were subsequently placed in a job.

But the firm has put out an appeal to recruit doctors in Sri Lanka.

And one of its social-media sites includes a testimonial from a medic from Zimbabwe who it placed in the NHS.

One doctor praised the firm for ‘running around’ to find him his first job in the UK, which is thought to have been a junior doctor role for Hillingdon Hospitals NHS Trust in April. The trust has been approached for comment.

NHS Employers highlights recruitment agencies that act in accordance with the Code of Practice.

A spokesperson said Remedium is not on its list of agencies that have committed to adhering to the code.

London North West Trust claims to have recruited 47 doctors from India and seven from Nigeria via Remedium.

Recruitment from India is generally acceptable aside from in the states of Andhra Pradesh, Madhya Pradesh, Orissa and West Bengal, which receive aid from the Department for International Development.

Dave Howard, marketing director for Remedium, adds the firm works with doctors who are ‘actively seeking opportunities within the UK’ as part of the ‘next step in their career’.

Official figures showed in February that 41 per cent – around 10,000 doctors – are 50 or over and are expected to quit within the next five to ten years.

Fewer young doctors are choosing to specialise as GPs, and are opting for more ‘macho’ career paths as surgeons or specialists.

Numbers of GPs are known to be dwindling in recent years, placing even more pressure on an over-stretched health service.

Many are retiring in their 50s, moving abroad or leaving to work in the private sector, as practices have threatened to close their waiting lists until action is taken.

This continued crisis has left many patients at risk, with staff unable to cope with the rising demand and slashed funding.

The shortage of doctors comes despite the NHS adopting a plan in April to recruit 5,000 extra GPs by 2021.

Mr Hunt’s pledge of £2.4 billion was said to be the answer to the staffing shortage, helping plug the growing number of vacancies.

This money was devised to lure GPs to move to the worst-hit areas of England, and to stop them from seeking another career.

Thousands of new ‘doctors on the cheap’ are also being trained to prop up the cash-strapped NHS, it emerged in June.

An army of ‘physician associates’ will work in GP surgeries and hospitals to diagnose patients, recommend treatments and perform minor procedures.

Scores of practices also believe they are working well beyond maximum capacity – feeling pressured to take on a higher workload and risk mistakes.

Abs Are Here! See Ronnie Ortiz-Magro's Body Before and After Liposuction
Health News