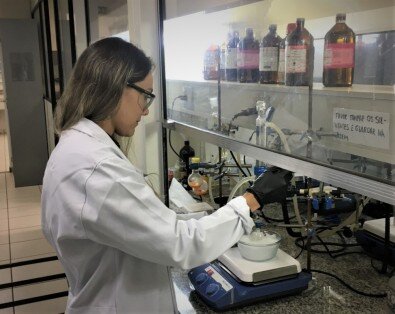 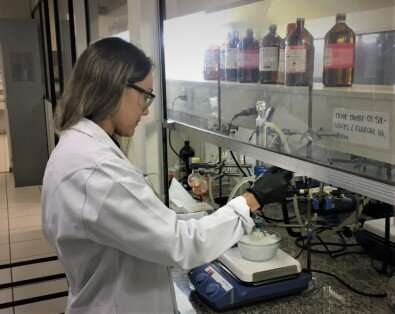 A group led by a researcher affiliated with the University of São Paulo’s São Carlos Chemistry Institute (IQSC-USP) in Brazil has developed a novel palladium compound that acts against ovarian tumor cells without affecting healthy tissues. Palladium is a silvery white metal belonging to the same group as platinum.

The molecule acts more selectively and powerfully in vitro than cisplatin, a platinum-based chemotherapy medication that is used to treat several types of cancer (such as testicular, bladder and head and neck cancer). This new compound also has the advantage of being effective against ovarian tumors that are resistant to cisplatin.

An article describing the study and signed by researchers from Brazil, the United Kingdom and Italy has been published in Dalton Transactions and is featured on the cover of the journal. The research was supported by São Paulo Research Foundation – FAPESP.

“Cisplatin is a highly effective chemo drug for this kind of tumor, which is typically very aggressive and needs to be combated rapidly. However, it can have severe side effects, especially on the kidneys, nervous system and hearing. This is because the molecule isn’t very selective, so it also affects healthy cells,” said Victor Marcelo Deflon, a professor at IQSC-USP and principal investigator for the project.

The study was conducted during the Ph.D. research of Carolina Gonçalves Oliveira, currently a professor at the Federal University of Uberlândia’s Chemistry Institute (IQ-UFU).

As the researchers explained, palladium compounds are quickly metabolized in humans, hindering their penetration into tumor cells and preventing them from reaching their molecular target. Therefore, to make their use in cancer treatment feasible, it was necessary to develop molecules capable of forming more stable palladium species.

The group produced several platinum- and palladium-based complexes. After testing the various combinations, the scientists identified two that contained compounds called thiosemicarbazones, a class of ligands that promote stabilization. The chemical structures of the compounds were characterized by X-ray diffraction, a technique in which X-rays directed toward a sample produce a diffraction pattern that is used to analyze the material’s structure.

Some thiosemicarbazones are known to act on topoisomerases, enzymes that are present in tumors and participate in DNA replication, making them a potential target for chemotherapy drugs.

Cisplatin acts directly on DNA, changing its structure in ways that prevent tumor cells from copying it. “They’re different targets, but both cisplatin and these palladium compounds inhibit tumor cell division,” Deflon explained.

Effect on the cell nucleus

Complex 1, named as such by the researchers because they considered it the most promising combination of palladium and thiosemicarbazone, acts directly on topoisomerase. Tests performed by the group using cultured tumor cells showed that 70% of the complex crossed the tumor cell membrane within 24 hours. Most of it was deposited in the cytoskeleton, a network of interlinking protein filaments present in the cytoplasm of all cells. A small proportion (approximately 3%) entered the nucleus. An even smaller proportion of platinum manages to reach the nucleus from the platinum-containing compounds currently in use.

The action of Complex 1 was twice as potent against tumor cells normally resistant to cisplatin. Moreover, it did not affect healthy cells. This selectivity should make it less toxic and avoid the side effects of current treatments.

Complex 2 is more selective than cisplatin, but its action is more effective only against a variety of tumor cells that are also sensitive to cisplatin, suggesting that its action mechanism may be the same as that of cisplatin. More experiments will have to be performed to refute this hypothesis. Furthermore, only 18% of the complex is able to cross the tumor cell membrane.