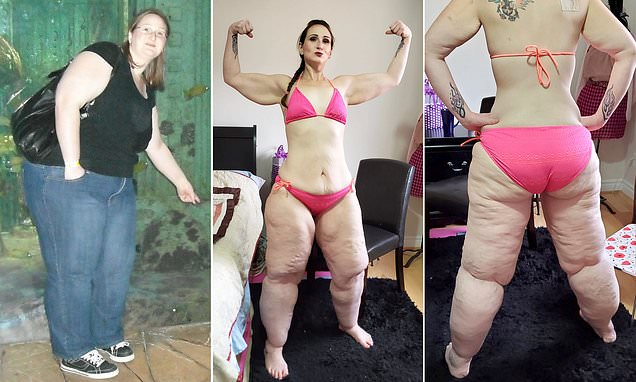 Mother left housebound by her gigantic legs is fundraising for surgery

Mother, 31, left housebound by her gigantic legs is desperately trying to raise £112,000 for life-changing surgery to drain 20 litres of fat from her limbs

Katie Baker, from Ontario, Canada, has legs that ‘feel like an overfilled water balloon that is about to burst’ due to the condition lipoedema.

The 31-year-old assumed she was just ‘fat’ and decided to lose weight, shedding her bulge through a gastric bypass.

But Ms Baker was left baffled when her legs continued to balloon in size. They now weigh a combined 44lbs (20kg), she claims.

Ms Baker, who was only diagnosed with lipoedema in September, claims her worries were dismissed by doctors for almost two decades who said she overweight.

Now, she says she is in so much agony that all she can do is lie down, meaning her 18-month-old son has gone into childcare and she has lost her job as a chef.

Ms Baker’s partner also broke up with her when the condition worsened during her first pregnancy, eight years ago. 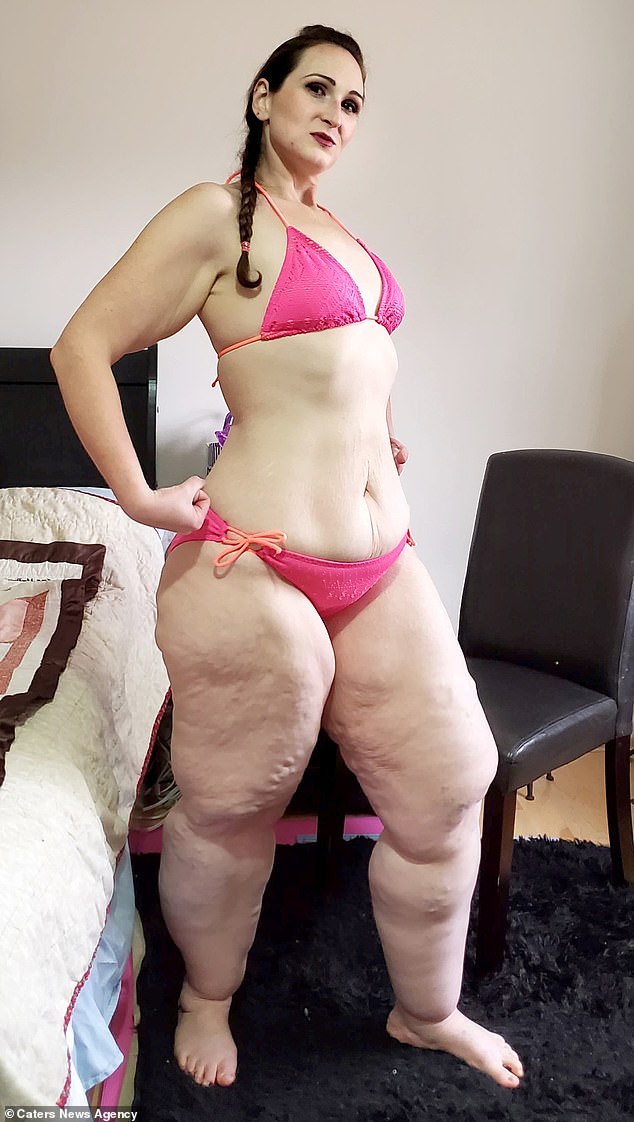 Katie Baker, 31, from Ontario, Canada, is trying to raise £112,000 for life- changing surgery to remove 20 litres of fat from her large legs 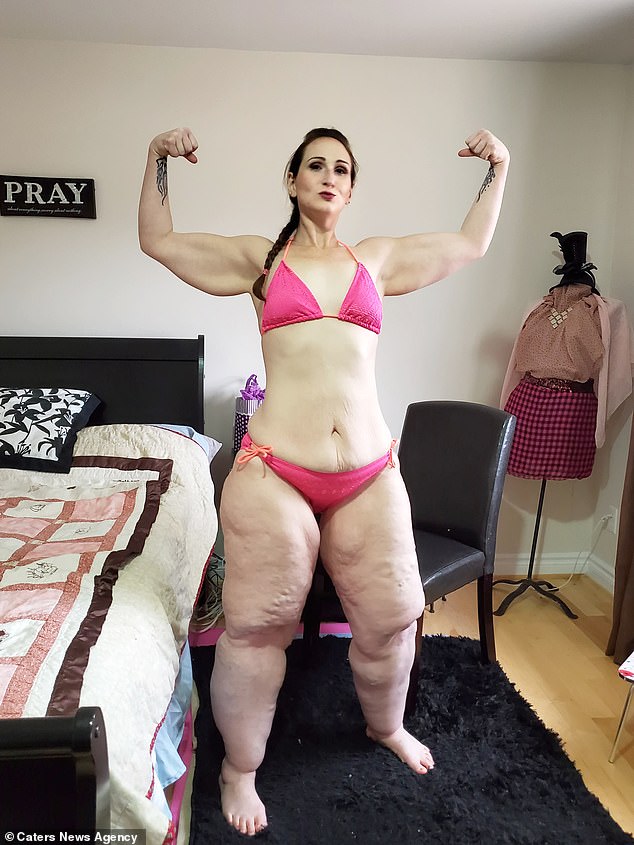 Ms Baker claims she is in so much agony that all she can do is lie down, meaning her 18-month-old son has gone into childcare and she has lost her job 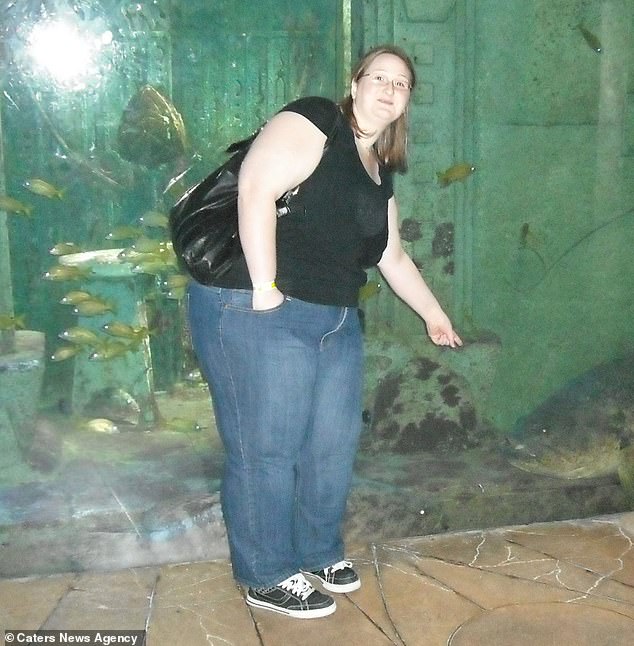 Ms Baker, pictured before her gastric bypass and dieting, said her partner broke up with her due to her when the condition worsened during her first pregnancy

Speaking about her lipoedema battle, Ms Baker said: ‘This condition is debilitating and taking over my life.

‘I am unable to sit down as my bum bruises and I experience excruciating pain when standing, which leads me to spend most of the day lying down.

‘I have experienced suicidal thoughts due to my condition getting worse and worse.

‘It isn’t just the mental aspect of dealing with lipoedema that is hard but the physical too.

‘I am constantly in pain; it is unbearable and feels like my legs are an overfilled water balloon that is about to burst.

‘I have had to put my son Benjamin who is 18 months into childcare because I can’t keep up with him.’

Ms Baker just thought she was ‘fat’ when her legs started to grow starting from the age of 13. As she got older, she claims doctors said the cause was ‘unexplained’ or she was simply overweight.

She said: ‘I first noticed I was getting fatter during my early teens when I was going through puberty.

‘I was known as the “fat kid” with an abnormal shaped figure as my top half was noticeably slimmer than my bottom half.

Ms Baker just thought she was ‘fat’ when her legs started to grow starting from the age of 13. Despite having a gastric bypass, her legs continued to balloon

‘It didn’t add up as I have never had a bad enough diet to compensate the weight.

‘I have spent most of my life feeling guilty and blaming myself for my legs – I thought I was ruining my own life by being fat.’

She said: ‘My partner couldn’t even look at me and now we’ve separated.

‘I felt relieved when I was diagnosed, I had read about lipoedema before online, but I thought it seemed too good to be true as I’d always blamed myself.

‘I didn’t understand how someone can be fat without it being their own fault.’

Lipoedema is a common condition, occurring almost exclusively in women – around 11 per cent, according to Genetic and Rare Diseases Information Center.

An abnormal build-up of fat cells occur in the legs, thighs and buttocks, and sometimes the arms. The skin feels doughy and cold and bruises easily.

The cause of lipoedema is unknown. However, there is evidence of hereditary and hormonal influences. It tends to start during puberty and other periods of hormonal change – such as pregnancy.

Ms Baker said: ‘I have suffered with severe self-confidence issues due to my condition causing me to be the victim of playground bullying.

‘Even when I take my children Abigail, eight and Benjamin, one, to the park – kids ask me “why are your legs so gross?”

‘It is never ending, and I just want to feel good in my own skin.’

Ms Baker was forced to quit her job when she was declared disabled in January 2018 – she has since become ‘stuck’ in her home.

She has also developed lymphedema – a long-term condition where excess fluid collects in tissues causing swelling. 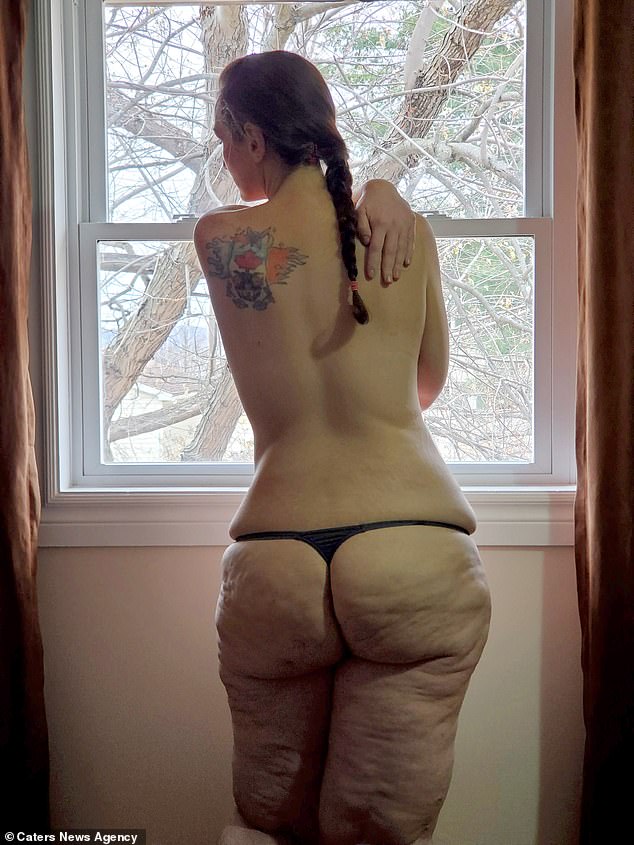 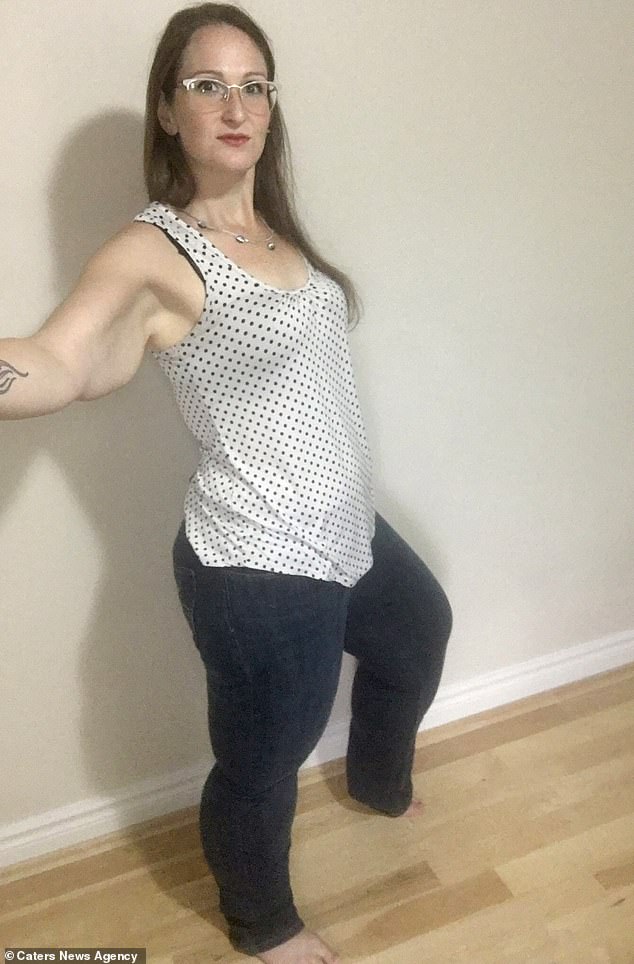 Ms Baker said: ‘I have spent most of my life feeling guilty and blaming myself for my legs – I thought I was ruining my own life by being fat’

Ms Baker is fundraising £112,500 to cover the costs of three surgeries to remove 20 litres of excess fat at a time from her legs. She has so far paid for the first consultation.

She said: ‘I want nothing more than to play with my children and return to work, I loved my job.

‘It is also stealing my daughter’s childhood; she is like a mini mum around the house and always checking up on me and offering a hand.

‘I am sharing my story for all the other women who are suffering with this chronic disease and want to get their life back also.

‘I am in the process of starting a lipoedema awareness campaign on social media to hopefully educate the medical community so it can be diagnosed and monitored early on.’

Lipoedema is a long-term chronic condition where there’s an abnormal build-up of fat cells in the legs, thighs and buttocks, and sometimes in the arms.

The condition usually only affects women, although in rare cases it can also affect men.

It is believed to affect nearly 11 per cent of adult women worldwide.

In lipoedema, the thighs, buttocks, lower legs, and sometimes the arms, become enlarged due to a build-up of abnormal fat cells. Both legs and/or the arms are usually enlarged at the same time and to the same extent.

The feet and hands aren’t affected, which creates a ‘bracelet’ effect or ‘band-like’ appearance just above the ankles and wrists.

Leg and arm size can vary between individuals with lipoedema, and the condition can gradually get worse over time.

There’s been little research into lipoedema, so there’s some uncertainty about the best way to treat the condition.

Tumescent liposuction involves sucking out the unwanted fat through a tube.

It’s difficult to get NHS funding for liposuction to treat lipoedema, but your GP can try to apply for funding through your local CCG.

Non-surgical treatments such as compression therapy can sometimes help improve pain and tenderness.

The cause of lipoedema isn’t known, but in some cases there’s a family history of the condition. It seems likely that the gene inherited from parents play a role.

Lipoedema tends to start at puberty or at other times of hormonal change, such during pregnancy or the menopause, which suggests hormones may also have an influence.

Although the accumulation of fat cells is often worse in obese people, lipoedema isn’t caused by obesity.

Samoa measles outbreak: 62 people dead – is an epidemic likely to happen in the UK? 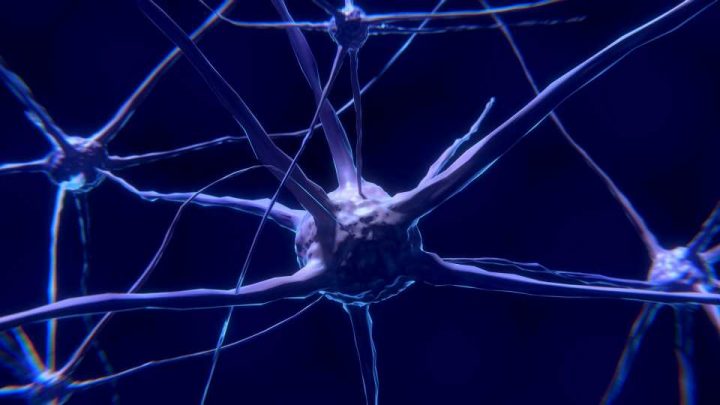