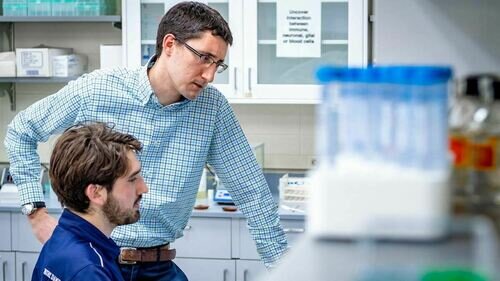 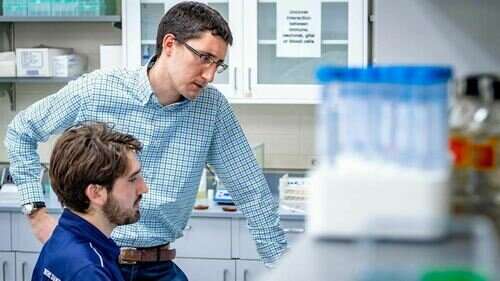 During the embryonic stage of brain development, some neurons and synapses form properly and connect, but others don’t, causing some parts and pieces to be discarded. This leaves behind dead or dying cells and requires the central nervous system to employ a type of cleanup crew.

Microglial cells take on that challenge, “ingesting” the waste, and are therefore critical for brain development. However, scientists lack a full understanding of how they populate the brain. A recent paper in Nature Neuroscience by University of Notre Dame biologist Cody J. Smith demonstrated how lymphatics—which remove waste from the rest of the body—are also associated with microglia and brain development in zebrafish.

“Microglia, we know, are born outside of the brain but must somehow get inside the brain during development, which is called colonization,” said Smith, the Elizabeth and Michael Gallagher Associate Professor in the Department of Biological Sciences. “We know that in humans this colonization is present by at least four weeks of gestation, and we went into this study with the idea of how we can find the pioneer microglia, and found the interplay between lymphatics and microglial development.”

In studies of both mice and zebrafish, scientists had learned that the precursors of microglia are formed in the yolk sacs, but they suspected there were other sources of these precursors. Using time-lapse imaging, researchers in Smith’s lab showed there were microglia-like cells, which express a gene called mrc1a+, that began populating the zebrafish brain within one day of brain formation. This was much earlier than expected.

More imaging revealed the precursor cells containing the mrc1a+ gene were migrating from lymphatics that surround the brain. When researchers disrupted the lymphatic cells, they noticed the number of microglia precursor cells was reduced.

“We discovered that if we disrupt the lymphatics, we screw up the colonization of microglia,” said Smith, who is affiliated with the Notre Dame Center for Stem Cells and Regenerative Medicine.

The team also noticed that the precursor cells that required the lymphatics were the ones that responded when the forming brains sustained a developmental injury.

Though Smith is excited about these findings, with his lab’s overall focus on how the nervous system is constructed, he also appreciated that this type of foundational research helps to create a blueprint that allows other researchers to understand why defects occur and how to fix them.

Also, Smith was encouraged by how the discovery was made. The researchers had set out to discover what allowed microglial cells to respond to injury, but they noticed during one last control test that there were more microglial cells than they had previously seen before. So, the lab investigated that part further.

“Understanding basic science is really important, but this is an example of where we were actually trying to go after one thing and ended up at something completely different,” Smith said.