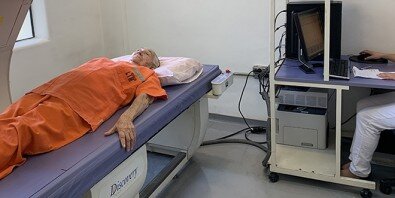 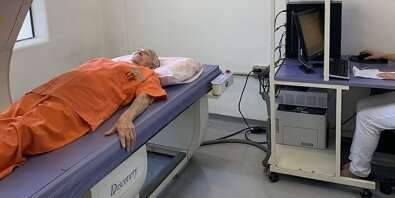 Evaluating body composition, especially appendicular muscle mass, can be an effective strategy for predicting longevity in people over 65 years of age, according to a study conducted by researchers at the University of São Paulo’s Medical School (FM-USP) in Brazil.

The appendicular muscles are the muscles that move the appendages or extremities—the arms and legs. They also play a key role in stabilizing the shoulders and hips.

The researchers studied a group of 839 men and women over the age of 65 for approximately four years. They observed that all-cause mortality risk increased nearly 63-fold during the follow-up period in women with low appendicular muscle mass and 11.4-fold in men.

An article with results of the study, which was supported by FAPESP, is published in the Journal of Bone and Mineral Research.

“We evaluated the body composition of this group, focusing on appendicular muscle mass, subcutaneous fat and visceral fat. We then sought to determine which of these factors could predict mortality in the ensuing years. We concluded that the key factor was the amount of appendicular lean mass,” Rosa Maria Rodrigues Pereira, Full Professor and Head of Rheumatology at FM-USP and principal investigator for the study, told Agência FAPESP.

Body composition was determined by dual energy X-ray absorptiometry (DXA), also known as bone density scanning, using a densitometer purchased with funding from FAPESP during a previous project led by Pereira to assess the prevalence of osteoporosis and fractures in older women living in Butantã, a neighborhood in western São Paulo city. The same cohort of individuals over 65 years of age was studied in both projects.

“Participants were selected on the basis of the census performed by IBGE [Brazil’s national census bureau]. The sample was representative of the older members of the country’s population,” Pereira said.

The study sample comprised 323 men (39 percent) and 516 women (61 percent). The frequency of low muscle mass was approximately 20 percent for both men and women.

The gradual loss of muscle mass and quality associated with aging is known as age-related sarcopenia. Approximately 46 percent of Brazilians aged 80 or older have sarcopenia, according to the Brazilian Association of Geriatrics and Gerontology.

Especially when combined with osteoporosis, sarcopenia can increase the vulnerability of older people in that they become more prone to falls, fractures and other physical injuries. Low bone mineral density, particularly in the femur, was shown to correlate with mortality in elderly individuals by research published in 2016.

Pereira and her group developed an equation to determine which individuals can be considered to have sarcopenia based on the characteristics of the community studied.

“According to the most widely used criteria [appendicular lean mass in kg divided by height squared in m], most of the individuals identified as having sarcopenia are lean. However, our sample had a higher-than-average BMI [body mass index], so we substituted muscle mass for fat mass. Subjects with muscle mass that was 20 percent below average were classified as having sarcopenia,” Pereira said.

The researchers discussed this topic in articles published in Osteoporosis International in 2013 and 2014.

In addition to bone density, the researchers also analyzed blood samples and responses to questionnaires to evaluate diet, physical activity, smoking, consumption of alcoholic beverages, and the presence of chronic diseases such as diabetes, high blood pressure and dyslipidemia (abnormally elevated levels of fat in the blood).

At the end of the four-year period, 15.8 percent (132) of the volunteers had died; 43.2 percent had died from cardiovascular problems. The mortality rate was 20 percent for the men and 13 percent for the women in the sample.

“We then conducted a number of statistical analyses to detect differences between the subjects who died and those who remained alive, particularly, whether it was possible to predict a person’s death on the basis of body composition measured by the DXA examination,” Pereira said.

Generally, subjects who died were older, exercised less, and suffered more from diabetes and cardiovascular problems than those who remained alive. In the case of the women who died, they also had decreased BMIs. The men who died were more likely to suffer falls. All these variables were fed into the statistical model and adjusted for the end-result to show which body composition factor correlated best with mortality risk.

Only low muscle mass was found to be significant in the women, considering the adjustment variables, while visceral fat was also significant among the men. The mortality risk doubled with each 6 cm2 increase in abdominal fat. Curiously, a higher proportion of subcutaneous fat had a protective effect in the men.

“We found that other parameters also negatively influenced mortality in the men, statistically reducing the significance of appendicular muscle mass. In the women, however, muscle mass stood out as a key factor and hence had more influence,” Pereira said.

Menopause-related hormone changes may help explain the difference between men and women. “The rapid and significant transition from a protective estrogenic environment to a deleterious hypoestrogenic environment, which is particularly adverse for the cardiovascular system, may make the protective metabolic role of skeletal muscles, including the production of anti-inflammatory cytokines, more important in the postmenopause period. This hormone change is far less abrupt in men,” she said.

Loss of muscle mass, which occurs naturally after the age of 40, can be unnoticed owing to weight gain, which is also common in middle age. Between 1 percent and 2 percent of muscle mass is lost annually after the age of 50, according to estimates. The factors that may accelerate muscle loss include sedentary habits, a protein-poor diet, chronic diseases and hospitalization.

In addition to their obvious importance in posture, balance and movement, the skeletal muscles have other functions that are essential to the body. They help regulate blood sugar by consuming energy during contraction and maintain the body temperature by trembling when cold. They also produce messenger hormones, such as myokinase, that assist communication with different organs and influence inflammatory responses.

Healthy colon: In the middle of the force is