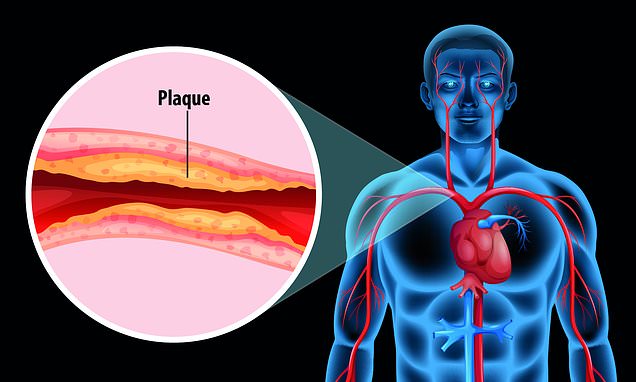 Patients who are shown a picture of their clogged arteries are more likely to take action to fight heart problems, study finds

Showing patients a picture of their clogged arteries drives them to take action to improve their heart health, a study has found.

Images that showed patients the build-up of plaque in their arteries (atherosclerosis) decreased their risk of heart disease one year later.

This was compared to patients who were not shown the hard-hitting images, whose risk actually increased.

Experts warn it is notoriously difficult to encourage patients at high risk of heart disease to change their lifestyles and take medication.

However, this new method of showing the extent of the problem could lead to better compliance. 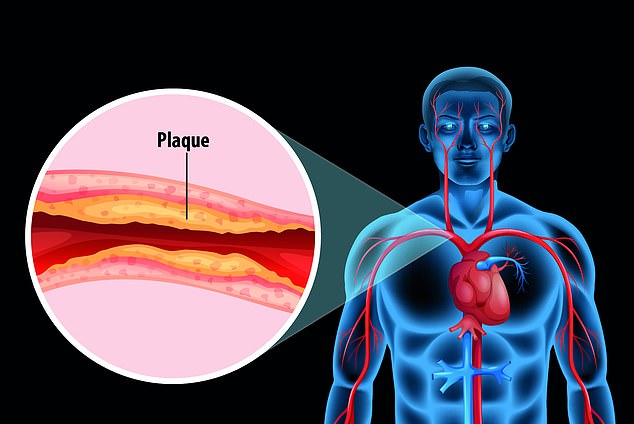 Showing patients a picture of their clogged arteries drives them to take action to improve their heart health, a new Swedish study on over 3000 people has found

There are around seven million people living with heart and circulatory diseases in the UK, according the British Heart Foundation. The figure is closer to the 80million mark in the US.

Study author Professor Ulf Naslund, based at Umea University in Sweden, said: ‘Cardiovascular disease is the leading cause of death in many countries.

‘And, despite a wealth of evidence about effective prevention methods from medication to lifestyle changes, adherence is low.

‘Information alone rarely leads to behaviour change and people’s recall of advice regarding exercise and diet is poorer than advice about medicines.

‘Risk scores are widely used but they might be too abstract and therefore fail to stimulate appropriate behaviours.’

These plaques cause the arteries to harden and narrow, restricting the blood flow and oxygen supply to vital organs.

As a result, the condition increases the risk of blood clots that could potentially block the flow of blood to the heart or brain.

It can lead to a number of serious cardiovasulcar conditions such as coronary heart disease, angina, heart attacks and strokes.

The risk of these diseases can be reduced by making lifestyle changes, such as quitting smoking and exercising, or taking preventative medication.

However, low adherence to medication and lifestyle changes mean that these types of prevention efforts often fail.

The study was done on more than 3,000 people aged between 40 and 60 from Sweden who had a risk of cardiovascular disease.

All participants underwent vascular ultrasound investigation to produce an image of the arteries.

The group was split into two, with one group were shown a pictoral representation of plaque formation in their arteries, and a gauge ranging from green to red to show what it should look like for their age.

This group then received a follow up call from a nurse after two to four weeks to answer any questions. Their picture was also sent to their primary care doctor.

All participants were given general information about their cardiovascular risk factors and told how to improve their lifestyle. They were also prescribed drugs if needed.

After a year the Framingham Risk Score, which estimates risk of heart problems or stroke, had decreased for those shown the images but increased for the control group, who weren’t shown an image. 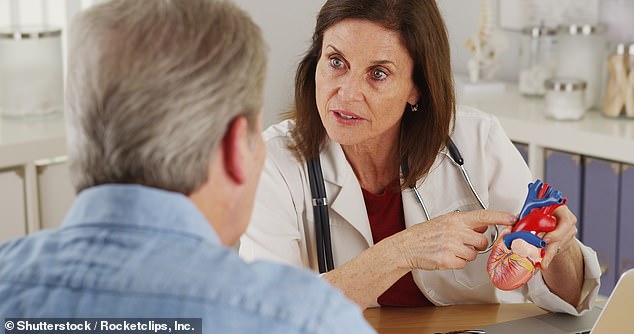 Professor Laslund said: ‘The differences at a population level were modest, but important, and the effect was largest among those at highest risk of cardiovascular disease, which is encouraging.’

Although the findings, which are published in The Lancet, suggests ways to care for patients in the future, it may be difficult to fund.

Professor Laslund said: ‘Our approach integrated an ultrasound scan, and a follow up call with a nurse, into an already established screening programme, meaning our findings are highly relevant to clinical practice.

‘Imaging technologies such as CT and MRI might allow for a more precise assessment of risk, but these technologies have a higher cost and are not available on an equitable basis for the entire population.’

WHAT DOES IT MEAN IF I HAVE HIGH BLOOD PRESSURE?

High blood pressure, or hypertension, rarely has noticeable symptoms. But if untreated, it increases your risk of serious problems such as heart attacks and strokes.

More than one in four adults in the UK have high blood pressure, although many won’t realise it.

Blood pressure is recorded with two numbers. The systolic pressure (higher number) is the force at which your heart pumps blood around your body.

The diastolic pressure (lower number) is the resistance to the blood flow in the blood vessels. They’re both measured in millimetres of mercury (mmHg).

As a general guide:

If your blood pressure is too high, it puts extra strain on your blood vessels, heart and other organs, such as the brain, kidneys and eyes.

Persistent high blood pressure can increase your risk of a number of serious and potentially life-threatening conditions, such as:

Insomnia: Light pollution and sleeping pill use may be linked