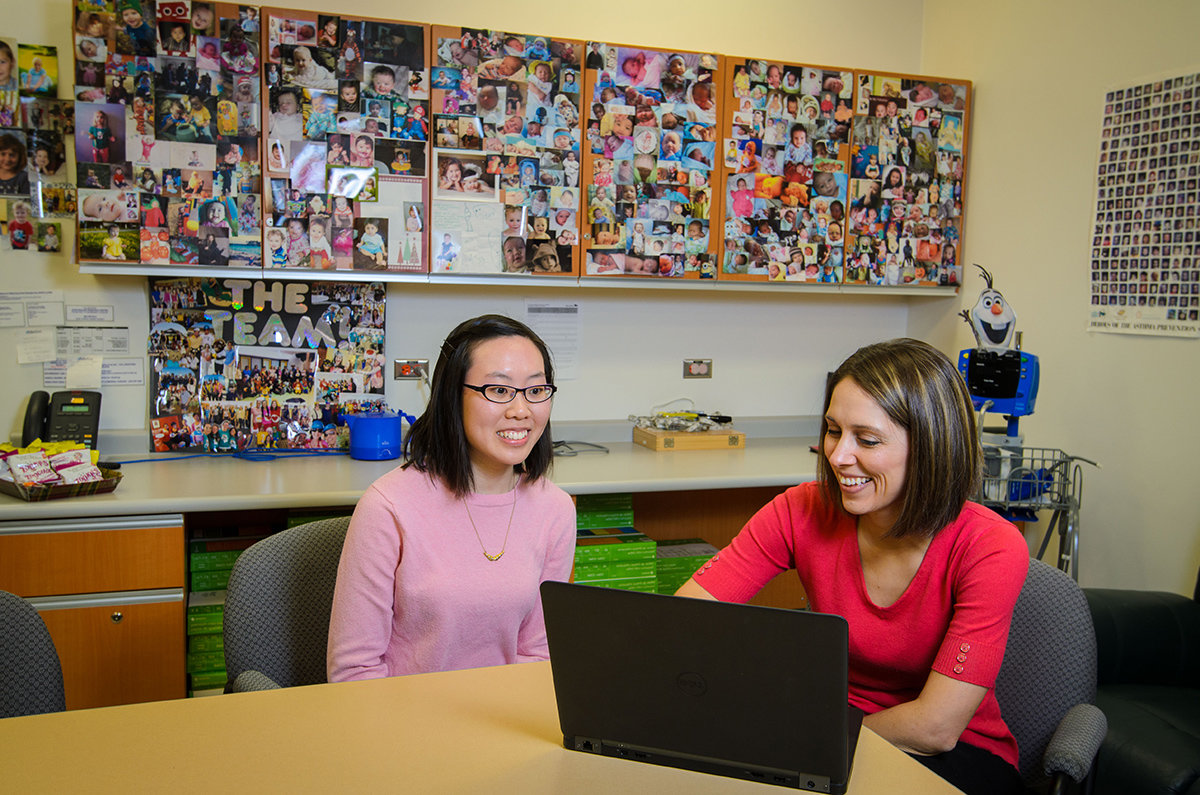 There’s a photo of a bright-eyed baby in a knitted owl toque. Another shows a toddler plunked down between Halloween pumpkins. And then there’s the awkward smiles of the first school portraits.

The images posted to the walls of the lab at the Manitoba site of the Canadian Healthy Infant Longitudinal Development Study, or CHILD, provide a snapshot into the growth of its 1,000 local participants—an evolution that is being carefully captured and analyzed.

The eldest of the children are now eight years old but more than 40 researchers across Canada, within the national AllerGen Network, have been tracking their environments since before they were born. Among the valuable samples collected: their first dirty diapers and their mother’s breastmilk, which are now opening new doors of study for one of the world’s largest birth cohorts on the origins of allergy and asthma.

CHILD researcher Meghan Azad, a University of Manitoba pediatrics and child health assistant professor, is breaking new ground with her findings on how breastmilk affects the baby’s gut flora.

She believes the complex interactions between microbes in a mother’s breastmilk and her baby’s gut microbiome (the bacteria that live in the digestive tract)—and its link to our immune systems—could reveal why a growing number of kids in North America need epi pens and puffers.

About 2.5 million Canadians live with food allergies, while asthma remains the number one reason kids visit the emergency department.

“The big question is, ‘Why do we have more asthma and allergy now than we did 40 or 50 years ago?’ We know our genes are important but our genes have not changed as a human race in 50 years. However, our environment has changed a lot,” says Azad, who is a Canada Research Chair in Developmental Origins of Chronic Disease, and a research scientist at the Children’s Hospital Research Institute of Manitoba.

Our gut microbiome trains our immune system to distinguish between normal, friendly bacteria and bacteria that make you sick, she explains.

“Right now, we know [the microbiome] is important but we don’t fully understand how these millions of microbes develop in the bellies of babies, and how they influence our health. We are just scratching the surface,” she says. “We don’t know what to recommend yet, in terms of how to modify or ‘optimize’ the microbiome—but we know it’s a critical part of human health.”

Her team is studying components found within breastmilk—including probiotic bacteria, food antigens, immune factors, and prebiotic sugars. They compare this data with health outcomes of the CHILD study kids over time to find out how breastmilk protects against allergy and asthma, as well as obesity and diabetes.

“We want to find specific components of breastmilk that are important, and figure out what they are doing to the gut microbiome—and understand how all of this affects the health and development of children. With the wealth of information captured in the CHILD study, we can really grasp the big picture, which is exciting,” she says.

So far, her findings show a link between a specific profile of complex sugars in breastmilk—known as oligosaccharides—and a lower rate of food sensitization during infancy. These bioactive molecules feed good bacteria.

Her team also discovered a different bacterial composition among breastfed babies who were supplemented with formula, compared to those exclusively breastfed.

Another study revealed a reduced risk of breastfed babies becoming overweight by their first birthday—the longer they fed, the better this protection.

As the co-lead for population health within the Manitoba Developmental Origins of Chronic Diseases in Children Network (DEVOTION), she sees the University of Manitoba becoming a world leader in lactation research. Together with fellow DEVOTION researcher Nathan Nickel, she is establishing a new breastfeeding research program: the Manitoba Interdisciplinary Lactation Centre, or MILC, that will look at breastfeeding from all angles.

Azad calls breastmilk “fascinating,” noting how it’s now being considered as treatment for bone marrow transplant patients to rebuild their immune system. And she uses the word “dosage” to describe a feed.

The antigens found in human milk differ based on the genetics of the mom, whether or not she’s battling a virus, and the foods she’s eating. The first feeds have higher concentrations of antibodies and oligosaccharides, which help kickstart the immune system and establish friendly gut bacteria.

Azad wants to know how environmental factors—like pumping and bottle feeding, versus feeding at the breast—affect a child’s health. In the U.S., where maternity leave is a mere six weeks, 85 per cent of breastfed babies are consuming pumped milk. “If that’s just as good, great, but if it’s not, then we should know that and understand why,” she says.

Azad grew up with asthma and as a 10-year-old kid took part in a U of M-led study of a new asthma drug. Later in life, her research journey took root in biochemistry and medical genetics (she earned her Ph.D. from the U of M in 2010). She felt the pull towards epidemiology, where she could study the health of people and populations, rather than cells and mice in a lab.

She sought training in Alberta before returning to the University of Manitoba because of its collaborative research community, as well as its access to not only the CHILD study but an important neighbouring resource: the Manitoba Centre for Health Policy.

“They have administrative data from everyone in the whole province of Manitoba—including hospital records, prescription records, physician billing records and education records. From that, we can do really powerful studies with the whole population,” she says, noting that breastfeeding data will soon be added to this list, facilitating research that is not possible anywhere else in the world.

Another important topic to tackle: social stigma. Azad’s recent research cast a lens on how breastfeeding is portrayed on Instagram. Scores of images posted by moms and more than 8,000 comments—overwhelmingly supportive—revealed a new support network and vehicle to normalize breastfeeding. Worldwide, less than 40 per cent of babies are breastfed exclusively for the recommended six months.

“I think a lot of it has to do with sexualization of breasts. There are other societies where breastfeeding is totally normal and no one gives it a second look. Breastfeeding rates are higher in these countries because people just don’t feel weird about it,” she says. “So how can we make Manitoba more like that? I think you have to start young so that kids grow up knowing that this is normal.”

Azad leads a project looking at how breastfeeding is discussed in Manitoba schools, and how the topic can be integrated into curriculum. Right now, students learn little to nothing.

“They might learn about it in high school if they take family studies, which is an optional class taken primarily by girls,” she says. “We’re not reaching everyone and it really needs to be everyone. From a young age, everyone should learn that it’s not a big deal [to breastfeed in public]—it’s just how we feed babies.”

The World Health Organization recommends babies be exclusively breastfed for six months and then continue to be breastfed, along with eating complementary food, up to age two or older. Statistics Canada’s most recent report on breastfeeding trends showed: