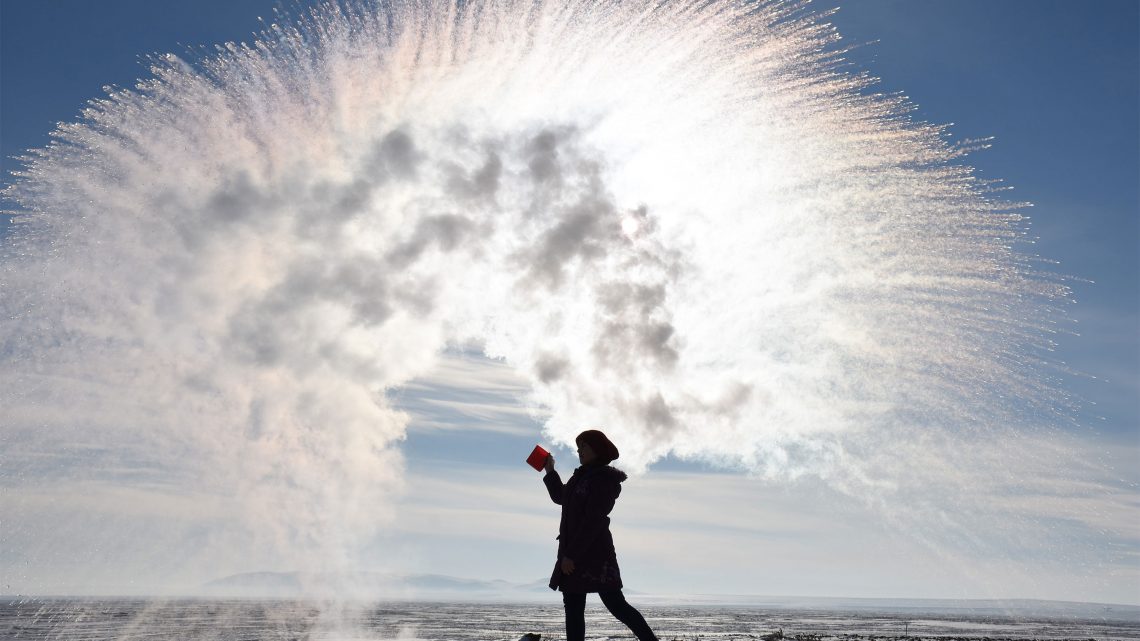 With people forced to hide inside as temperatures hit -50 degrees in parts of the U.S. and well below freezing in many others, they’re understandably getting a little stir-crazy and looking for entertainment. But we’re unfortunately here to break up the fun, because as cool as it may seem to throw boiling water up in the air or go outside with wet hair, it’s not great for your health.

So while videos of water instantly turning to ice crystals and kids with bright red knees from wearing shorts are taking over social media, there’s a real danger to messing around in these temperatures.

The biggest risk right now is frostbite, and a reported eight people have died in the last few days, likely due to the weather.

“Depending on the temperature and your age, in these below zero temps you can get frostbite very quickly, in minutes or less,” says Dr. Elizabeth Murray, a pediatrician at Strong Memorial Hospital in Rochester, NY (where it’s -25!) and member of PEOPLE’s Health Squad.

The frostbite causes the skin to burn, and can lead to other problems — so put a few layers over those shorts.

“Extremes of temperature, hot OR cold, will burn skin and muscle,” Murray says. “If you expose your body directly to extremely cold temperatures, you risk causing injury to that body part. Plus, it makes it easier for you to develop hypothermia. If your body cannot maintain its internal temperature, all body systems will start to malfunction and cause heart problems and loss of consciousness, to name a few.”

The cold air is also bad for breathing, says Dr. Travis Stork, an ER physician and host of The Doctors.

“Extreme cold can be dangerous to your lungs, particularly if you have asthma or other respiratory issues,” he says. “The frigid air can irritate your airways, resulting in coughing, and it can cause lungs to spasm, making it difficult to catch your breath.”

As for going out with wet hair, it won’t immediately make you sick, but it’s not a great plan.

RELATED VIDEO: Temperatures Reach -50 Degrees In Some Areas As Polar Vortex Hits the US

And the most popular social media trend, throwing boiling water into the sub-zero temperatures to watch it crystalize, is the most harmless — but make sure to bundle up.

“If an adult wanted to go outside quickly to do this with everyone else watching from inside, it is probably fine,” Murray says. “Of course, everyone should follow the recommendations of their local health officials. If the wind chill is -50 where you are, it’s likely not worth the few seconds of seeing a neat science experiment.”

And be careful if it’s not quite cold enough in your neighborhood — the water crystalizes because when it’s boiling, it’s close to the evaporation point. If the water doesn’t evaporate it won’t immediately cool down, so you may end up with boiling water on your arms. The Washington Post’s Capital Weather Gang recommends temperatures of -18 or lower to try this trick. And check which way the wind is blowing before you go for the throw!

It can be tough to stay inside on these bone-chilling days, especially with kids, so try to plan some fun activities.

“It can be tempting to want the kids out of the house for a little while, but in these extreme temperatures it is best for everyone to stay inside,” Murray says. “Movie day, baking day, craft day — it’s ok to loosen some of the normal rules and routines when dealing with cold days.”

And if you do have to go outside, layer up.

“Dress in several layers of warm clothing and make sure to cover areas that are prone to losing heat quickly, like head, hands and feet,” Stork says. “Wear mittens, a scarf that can cover your mouth and nose, and a hat.”