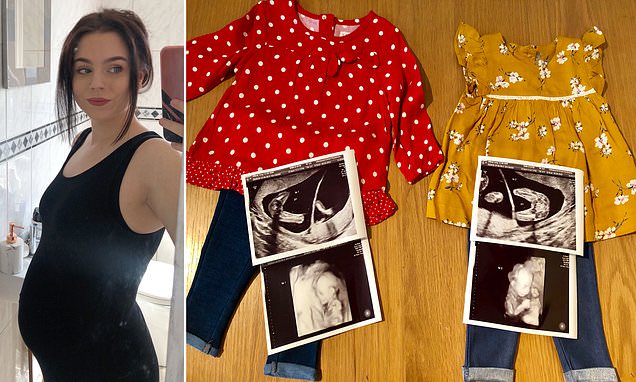 Heartbroken mother says she pleaded with doctors to save her babies

Heartbroken mother, 20, says her twin girls died because doctors refused to offer her a procedure which may have stopped them being born at 22 weeks

Lucy Offord, 20, says her twin babies’ lives could have been saved if doctors had given her a cervical stitch to prevent a premature birth at just 22 weeks

A heartbroken mother says her twin babies’ lives could have been saved if doctors had given her a cervical stitch, which may have prevented them being born prematurely after just 22 weeks.

Lucy Offord, 20, claims her 13-week scan showed her cervix was dangerously short, which put her babies at risk of being born too early.

A short cervix may open too soon, therefore a stitch, normally offered between 12 and 24 weeks of pregnancy, keeps it closed.

Miss Offord, from Chatham in Kent, went into labour at 22 weeks and three days – before the abortion cut-off, giving birth to Autumn Grace and Peyton Rose in May 2019.

She claims her girls were breathing and showing signs of life, and she pleaded with medics at Medway Maritime Hospital to intervene.

But they didn’t because, legally, babies born before 24 weeks are not deemed to be capable of surviving and are likely to be extremely disabled if they do. They died hours later.

The NHS does not recommend a cervical stitch for mothers-to-be who are carrying twins or triplets.

Leading gynaecologists say there is no evidence the procedure will prevent an early labour in women with multiple pregnancies.

However, Miss Offord feels ‘let down’ by the NHS and believes she was discriminated against because of her age.

Miss Offord, who is unemployed, said: ‘It’s been horrendous. I feel I was pied off because it was my first pregnancy and I’m young.

‘I feel let down by the NHS. If a stitch had been fitted around the 13-week mark than we wouldn’t be having this conversation.’

Miss Offord, whose cervix was 2.5cm short, added: ‘If they are born breathing they should be helped. It’s a basic human right.’ 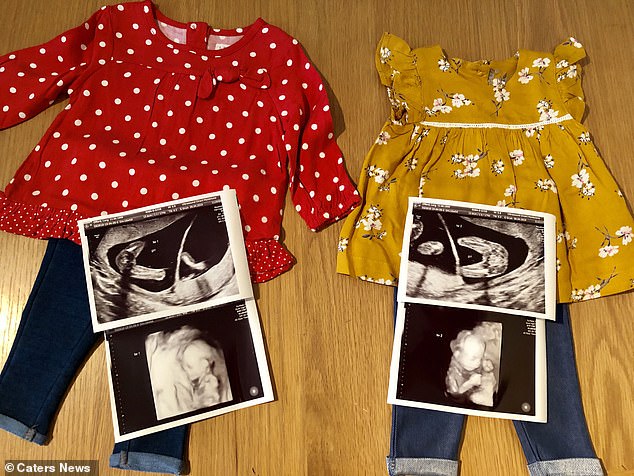 Miss Offord, from Chatham, Kent, went into labour at 22 weeks and three days, giving birth to Autumn Grace and Peyton Rose in May 2019. Pictured, the clothes she bought for them

She claims to have asked for a cervical stitch to be fitted – but was told it was ‘old fashioned’ and wouldn’t be effective.

Babies born between 23-24 weeks are a ‘a major medical and ethical challenge’, the Royal College of Obstetricians and Gynaecologists says.

Writing in a scientific paper in 2014, the body went on to state that at ‘at 22 weeks of gestation there is no hope of survival’.

Generally, babies are considered ‘viable’ only over 24 weeks of pregnancy, meaning there is possibility for them to survive being born at this stage, the NHS says.

Premature birth is the largest cause of neonatal mortality in the US and the UK, data shows. Many babies born too early aren’t ready for life outside the womb.

Despite this, Miss Offord believes that as her baby’s were showing signs of life when they were born, they should have been offered helped by medics. 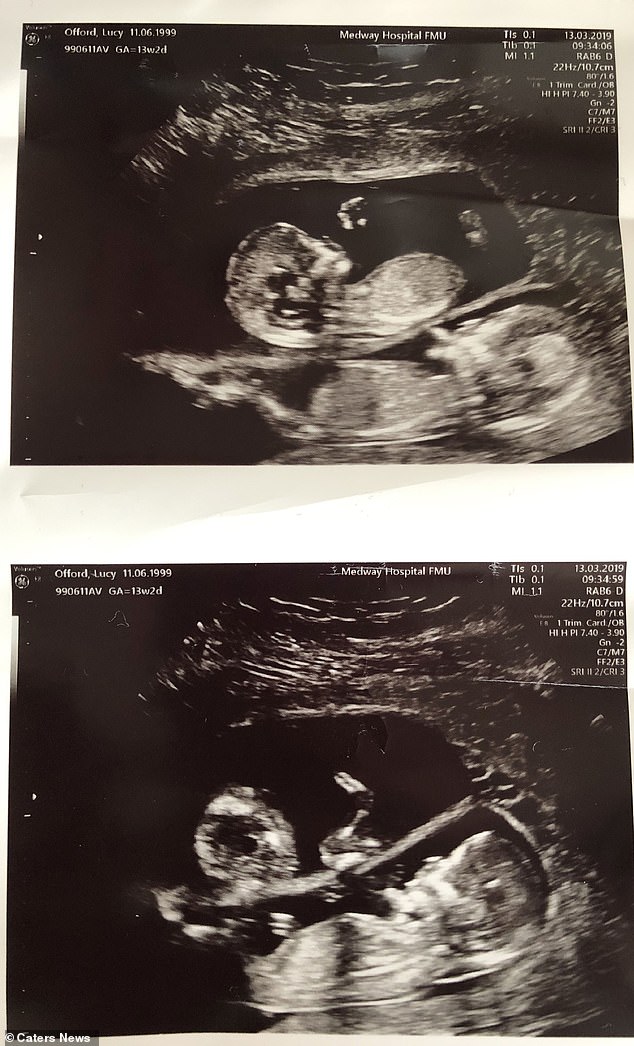 Miss Offord claims her 13 week scan showed her cervix was dangerously short, which puts her babies at risk of being born too early. But she wasn’t offered a cervical stitch 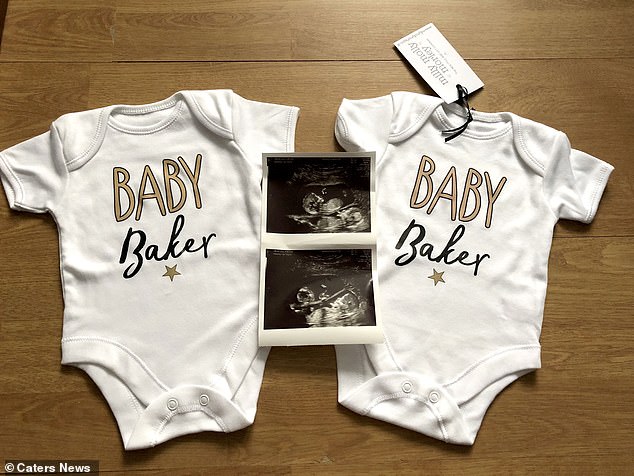 Miss Offord claims her girls were breathing and showing signs of life, and she pleaded with medics to intervene. They didn’t because babies are only deemed viable at 24 weeks

Miss Offord, pictured during pregnancy, feels ‘let down’ by the NHS and believes she was discriminated against because of her age

She said: ‘The moment I was handed them was very surreal, I didn’t feel like it was happening to me.

‘They came out perfectly. They were both born breathing and I could see them moving about.

‘I pleaded with the doctors to help them. They said they couldn’t do anything and if they had a chance of surviving they would be severely disabled.

‘If someone is 90 and goes into hospital and passes out but is still breathing they’ll be resuscitated. Why shouldn’t a baby?’

Miss Offord believes it should be the parents’ choice, not up to doctors, to try and save a premature baby.

She said: ‘At the end of the day if a baby is born breathing the doctors still need to have a duty of care.

‘If the parents turns around and says “don’t intervene” that’s fine.

‘But I wanted them to try and save my children and at the end of the day as a parent I should have the right to decide if I want my child helped or not.’

Miss Offord also claims part of her baby’s placenta was left inside of her, meaning she had to have emergency surgery.

A retained placenta is when part of the placenta remain in the womb, occurring in around three per cent of vaginal births, according to the charity Tommy’s. 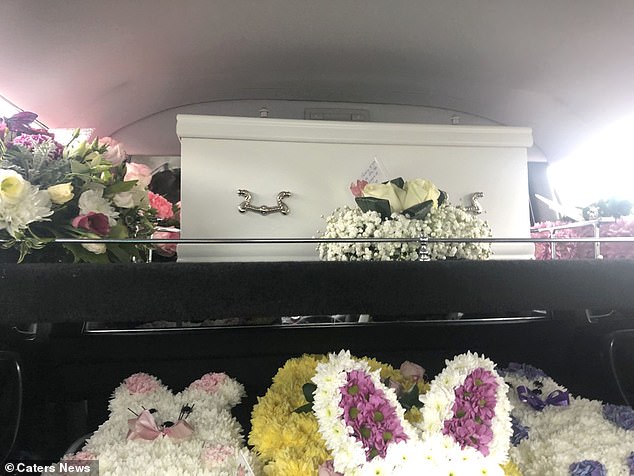 Miss Offred said she feels the hospital haven’t supported her through a very traumatic time. Pictured, the casket for Autumn Grace and Peyton Rose

If this isn’t treated, it can cause life-threatening bleeding. Miss Offord said: ‘The support from the hospital since has been appalling.

‘I was left with continuous heavy bleeding but was told that it was just normal. Then one day in July I started bleeding out.

‘I lost lots of blood and had massive blood clots. I was rushed to hospital and was given an internal scan where it was found out I still had attached placenta with blood flow in me.

WHAT IS A CERVICAL STITCH?

A possible cause of giving birth early is because the cervix shortens and opens too soon. A cervical stitch may help to prevent this.

It’s placed around the cervix – the neck of the womb – usually between 12 and 24 weeks of pregnancy, although occasionally it may be done at later stages in pregnancy.

Babies born earlier than the 37 completed weeks of pregnancy have an increased risk of short and long term health problems.

Sometimes a cervical stitch is not advised because it may carry risks to you and it would not improve the outcome for the baby.

This may be if there are signs of infection, vaginal bleeding, the woman is having contractions or the waters are already broken.

There is no definite evidence to show that a cervical stitch will prevent an early labour if the mother is carrying more than one baby.

‘I’m only just beginning to recover physically from what has been a very traumatic time.’

Miss Offord spent three days with her baby’s in the hospital’s bereavement suite, where she dressed and spent time with them.

She said: ‘Each and every moment was terrible. We tried to get on as best we could but it was a bit surreal.

‘It’s been terrible coming home and seeing all the things we would have had with them.

‘I remember opening the front door and seeing this empty house full of all these toys and clothes. None of it had any purpose anymore.

‘I’m not sure what the future holds and if I can see myself having kids in the future.

‘The fate of my baby’s was taken out of my hands and I just hope that other mums out there are able to be given at least a choice.’

Harvey McEnroe, chief operating officer for Medway NHS Foundation Trust said: ‘We would again like to extend our sincere sympathies to Ms Offord and her family.

‘The devastating impact of pregnancy loss is not underestimated by our team who provide care to women and their families at such a distressing time.

‘Our maternity team is trained and supported to give high quality compassionate care to all of our families on our bereavement pathway and we are very sorry that Ms Offord was unhappy with the care she received during this very traumatic time.

‘In line with national guidance, at a gestational age of 22 weeks it is considered in the best interests of the baby for resuscitation not to be carried out as chances of survival without severe long-term problems are so low that active intervention to support life is not recommended.

‘A premature birth is traumatic for any family and we are extremely sorry for Ms Offord’s loss.

‘We are currently in the process of liaising directly with Ms Offord in response to her concerns.’

WHAT ARE THE GUIDELINES FOR GIVING PREMATURE BABIES MEDICAL CARE?

The British Association of Perinatal Medicine (BAPM) sets out guidelines for all doctors and NHS hospitals – across the UK – to follow when a baby is born very prematurely.

The NHS states that babies are considered to be ‘viable’ at 24 weeks or later into the pregnancy – this means it’s possible for them to survive being born from this point onwards.

The earlier the baby is born, the less chance there is of it surviving and being healthy, so the national recommendations for care of babies born very early are as follows:

25 weeks and over – The baby will be actively cared for to support breathing and keep it warm, and transferred to the neonatal intensive care unit for ongoing care.

24 weeks – Resuscitation and intensive support is usually offered unless parents and doctors agree that there is little hope of survival or baby’s level of suffering would outweigh the baby’s interest in continuing to live.

23 weeks – At this stage of pregnancy, there is greatest uncertainty about the outcome for an individual baby. Intensive support will be offered if parents specifically request it and the senior paediatrician/neonatologist (baby doctor) present feels it to be appropriate. Otherwise comfort care only will be given to your baby with no active intervention to support life.

22 weeks – At this very early gestation the chances of survival without severe long term problems are so low that active intervention to support life is not recommended and comfort care is given to a baby. An experienced neonatologist will be close at hand if appropriate, though the baby would not usually be given active support because the chances of survival are so low.