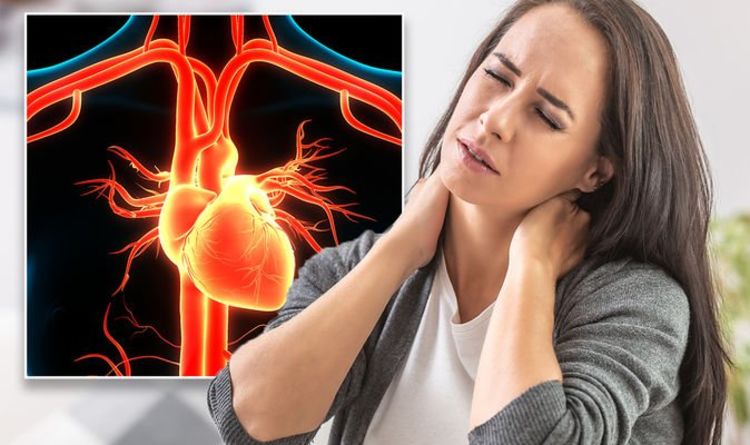 Heart attack: The ‘silent’ symptoms you could easily miss – not ‘classic’ chest pain

Still one of the main causes of death in the UK, regular symptoms of a heart attack can include: chest pain; feeling lightheaded; sweating; shortness of breath; and vomiting. Although chest pain is often severe, some people may only experience minor pain, similar to indigestion.

In some cases, there may not be any chest pain at all, especially in women, older people, and people who have diabetes – so spotting the early signs of a heart attack may prove to be tricky.

It is the overall pattern of symptoms that helps to determine whether you are having a heart attack, however. Now, symptoms of a heart attack in older people could be so easily missed that you may have had a heart attack without realising.

According to Harvard Medical School’s (HMS) recent study: “Nearly half of people who have a heart attack don’t realise it at the time.

“These so-called silent heart attacks are only diagnosed after the event, when a recording of the heart’s electrical activity (an electrocardiogram, or ECG) or another test reveals evidence of damage to the heart.”

The dangerous obliviousness of an untreated heart attack can cause irreversible harm to the heart or be fatal.

Researchers at HMS have been investigating what is causing these silent heart attacks.One explanation may be a higher-than-average tolerance for pain, as a recent study suggests. Other people mistake their symptoms as indigestion or muscle pain.

Still, others may feel pain, but in parts of their upper body other than the centre of the chest – which is usually ignored. A Danish study found that one in four heart attacks may present with atypical symptoms that can easily be brushed off or confused for other disorders.

The US-based study pleaded that people look out for early examples of signs to spot a heart attack before leaving the life-threatening event too late.

Mild Discomfort in Your Chest

Heart attacks do not always announce themselves with the classic symptom of severe pain in the chest. In fact, only half of heart attacks present in this way, says Harvard Medical School.

Instead, you might feel only mild discomfort, pressure, tightness, or squeezing in the chest area.

Doctor Kenneth Rosenfield, head of the vascular medicine and intervention section at Harvard-affiliated Massachusetts General Hospital, said: “Many people don’t realise that during a heart attack, the classic symptom of chest pain happens only about half of the time.”

People sometimes describe heart attack symptoms as chest discomfort or pressure, while others say they feel an intense, crushing sensation or a deep ache similar to a toothache.

Certain people are less sensitive to pain than others, or they may deny their pain and leave symptoms untreated.

Not everyone has a good sense of their own pain tolerance, however, and a host of other factors (such as your emotional state) can affect pain perception.

People with diabetes may be less sensitive to pain because the disease can deaden nerves (a condition known as diabetic neuropathy), theoretically raising their risk for a silent heart attack.

During a heart attack, the location of the pain can also vary quite a bit from person to person, explains doctor Rosenfield.

Symptoms may occur in the arm, shoulder, neck, jaw, or elsewhere in the upper half of the body.

“I had one patient who had earlobe pain, and another who felt pain in his wrist,” said doctor Rosenfield, outlining that symptoms can originate from anywhere in the body and uncommon signs should not be ignored.

Other unorthodox symptoms people often do not attribute to a heart attack include nausea, vomiting, and weakness.

Doctor Rosenfield also explained that “there is no question that women are more likely to experience non-classic heart attack symptoms, but it is important to remember that men can have those symptoms, too”.

What Does It Mean When Your Right Ear Hurts