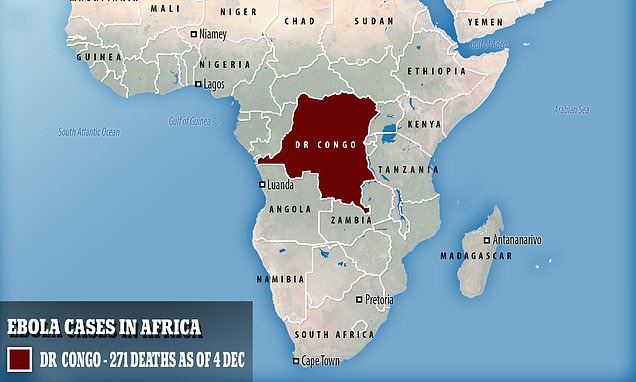 Fears grow over Ebola as more vaccinations are given

Hundreds of health workers in South Sudan will be given Ebola vaccinations amid fears the virus will spread from the Democratic Republic of the Congo.

Official statistics show the death toll in the African nation – battling the second biggest Ebola outbreak in history – has reached 285.

No cases have been confirmed in neighbouring South Sudan yet, but the country is on ‘high alert’, according to the World Health Organization (WHO).

More than 2,000 healthcare and frontline workers in the country will be offered a vaccination to try and stop the spread.

Teams of vaccinators are ready to conduct the vaccinations, starting in the capital, Juba, on December 19.

The UN Refugee Agency warns there is an influx of Congolese refugees seeking shelter in South Sudan because of conflict in the DRC. 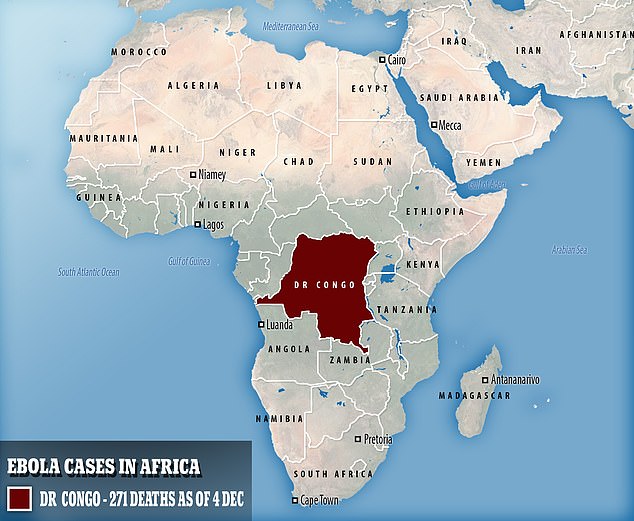 Fears that Ebola is spreading from the Democratic Republic of Congo, where the death toll has reached 271 as of December 4, to neighbouring countries has lead to a surge in vaccinations. 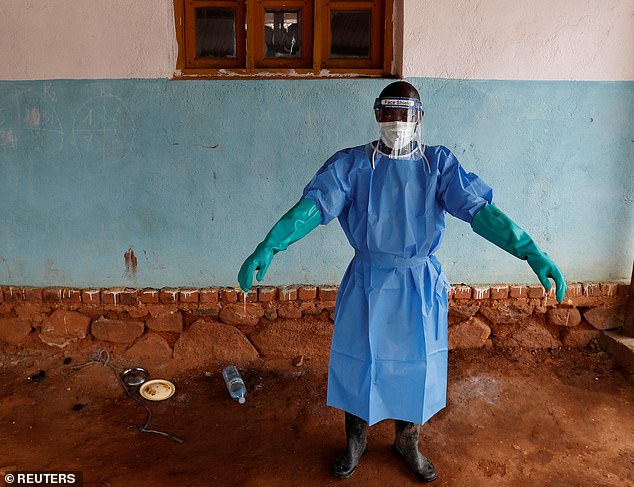 The second biggest outbreak of Ebola has taken the lives of 271 in the Democratic Republic of Congo so far. Pictured, a healthcare worker stands after cleaning a room after an Ebola patient stays in a hospital in Bwana Suri, Ituri province, December 10

A ‘ring vaccination’ strategy will be used, where every contact of an Ebola case, including health workers and family members, is traced and vaccinated.

Those vaccinated are followed up and monitored closely for 21 days.

The experimental vaccine that will be used, known as rVSV-ZEBOV, targets the Ebola virus-Zaire strain, the one ravaging the Congo now.

The vaccine, said to be highly effective by the WHO, first went on trial during the Ebola pandemic four years ago, which killed more than 11,300 people.

Uganda and Rwanda, which also border the DRC, are also considered to be at ‘very high risk’ of the deadly viral disease.

Ebola can be transmitted between humans through blood, secretions and other bodily fluids of people – and surfaces – that have been infected.

The African country’s Ebola outbreak, which began in August, is showing no signs of slowing down. More than 450 people are feared to have been struck down. 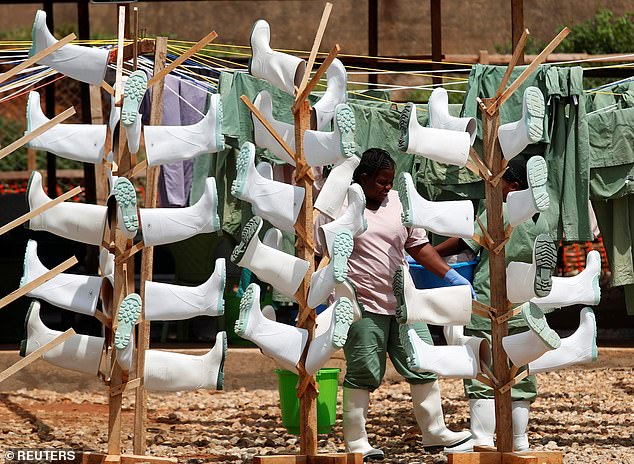 Ebola can be transmitted between humans through blood, secretions and other bodily fluids of people – and surfaces – that have been infected. Pictured, a health care worker arranges washed boots in a transit centre in Beni, North Kivu Province of Democratic Republic of Congo, December 6 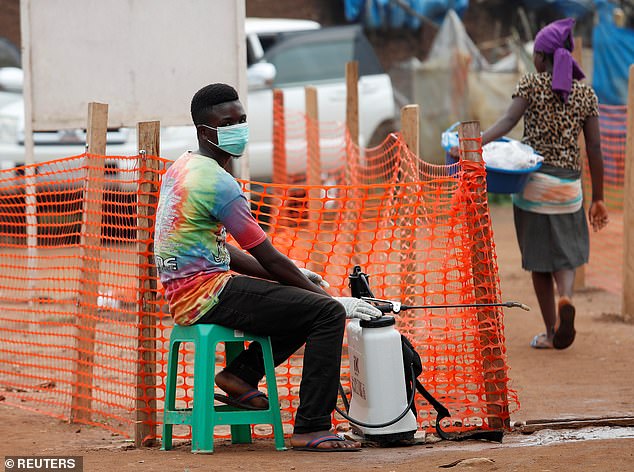 Aid workers are also battling the Ebola outbreak alongside a spike in malaria cases at the same time, health chiefs have previously warned.

HAS THE DRC HAD AN EBOLA OUTBREAK BEFORE?

DRC escaped the brutal Ebola pandemic that began in 2014, which was finally declared over in January 2016 – but it was struck by a smaller outbreak last year.

Four DRC residents died from the virus in 2017. The outbreak lasted just 42 days and international aid teams were praised for their prompt responses.

The new outbreak is the DRC’s tenth since the discovery of Ebola in the country in 1976, named after the river. The outbreak earlier this summer was its ninth.

Health experts credit an awareness of the disease among the population and local medical staff’s experience treating for past successes containing its spread.

DRC’s vast, remote geography also gives it an advantage, as outbreaks are often localised and relatively easy to isolate.

Experts say people suffering from Ebola and malaria are becoming mixed up, making it more difficult to control the fast-spreading virus.

Figures show the disproportionate number of women and children infected during this outbreak, considered a concern by the WHO.

The treatment of Ebola itself has taken an experimental turn in DRC, where scientists are now conducting a real-time study of how well pioneering drugs work.

More than 160 people there have already been treated with the drugs, and the way people are treated won’t change, but scientists will now be able to compare them.

Four experimental drugs are being used to try and combat the disease – mAb 114, ZMapp, Remdesivir and Regeneron.

Patients will get one of the four, but researchers won’t know which they were given until after the study.

The outbreak has been plagued by security problems, with health workers attacked by rebels in districts where the virus has been spreading.

Health workers had to be evacuated from their hotel after it was hit by a shell in a nearby armed rebel attack last month.

Armed groups have kidnapped and killed people trying to treat the sick, and ongoing conflict has made locals suspicious of official health workers.

WHAT IS EBOLA AND HOW DEADLY IS IT?

Ebola, a haemorrhagic fever, killed at least 11,000 across the world after it decimated West Africa and spread rapidly over the space of two years.

That pandemic was officially declared over back in January 2016, when Liberia was announced to be Ebola-free by the WHO.

The country, rocked by back-to-back civil wars that ended in 2003, was hit the hardest by the fever, with 40 per cent of the deaths having occurred there.

Sierra Leone reported the highest number of Ebola cases, with nearly of all those infected having been residents of the nation.

WHERE DID IT BEGIN?

An analysis, published in the New England Journal of Medicine, found the outbreak began in Guinea – which neighbours Liberia and Sierra Leone.

A team of international researchers were able to trace the pandemic back to a two-year-old boy in Meliandou – about 400 miles (650km) from the capital, Conakry.

Emile Ouamouno, known more commonly as Patient Zero, may have contracted the deadly virus by playing with bats in a hollow tree, a study suggested.

HOW MANY PEOPLE WERE STRUCK DOWN?

Figures show nearly 29,000 people were infected from Ebola – meaning the virus killed around 40 per cent of those it struck.

Cases and deaths were also reported in Nigeria, Mali and the US – but on a much smaller scale, with 15 fatalities between the three nations.

Health officials in Guinea reported a mysterious bug in the south-eastern regions of the country before the WHO confirmed it was Ebola.

Ebola was first identified by scientists in 1976, but the most recent outbreak dwarfed all other ones recorded in history, figures show.

HOW DID HUMANS CONTRACT THE VIRUS?

Scientists believe Ebola is most often passed to humans by fruit bats, but antelope, porcupines, gorillas and chimpanzees could also be to blame.

It can be transmitted between humans through blood, secretions and other bodily fluids of people – and surfaces – that have been infected.

IS THERE A TREATMENT?

The WHO warns that there is ‘no proven treatment’ for Ebola – but dozens of drugs and jabs are being tested in case of a similarly devastating outbreak.

Hope exists though, after an experimental vaccine, called rVSV-ZEBOV, protected nearly 6,000 people. The results were published in The Lancet journal.

10 lessons that you can only do in the winter

Created gel for the prevention of metastases
Health News