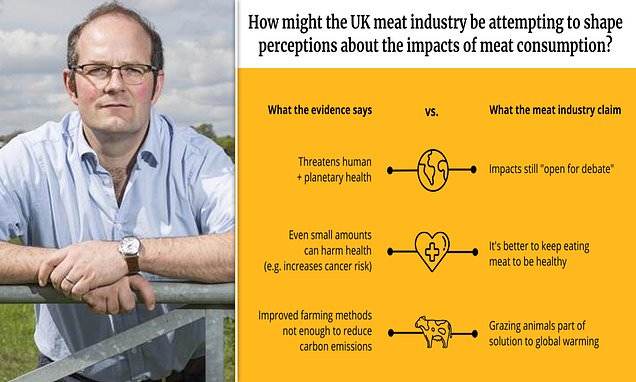 Farmers slam scientists for 'reckless' comparison of meat and tobacco

Farmers slam scientists for ‘reckless’ and ‘unjustified’ claims that meat industry is as bad for human health and the planet as alcohol, tobacco and fossil fuels

Farmers today slammed ‘reckless’ scientists for suggesting meat can be just as bad for human health and the environment as alcohol, tobacco and fossil fuels.

The row kicked off after academics from the London School of Hygiene and Tropical Medicine published a paper which likened the industry’s PR tactics to those in ‘other harmful commodities’.

They stated that meat-eating is a ‘a threat to both human health and the health of the planet’.

The report also said the ‘meat industry may be using various frames that counteract this narrative’ — similar to tactics used by Big Tobacco.

But the National Farmers’ Union — which represents 47,000 farmers in England and Wales — described the claims as ‘unjustified’.

They were one of six industry players that the researchers called for ‘greater scrutiny’ on.

Research has linked red meat to several types of cancer, including bowel and colon, because of chemicals released while it is being digested and the preservatives used while transporting it.

But it also offers a good source of protein, iron and vitamin B12, with other research suggesting red meat can improve blood pressure and prevent other health issues.

Livestock farming accounts for around 15 per cent of all greenhouse gas emissions worldwide. But British farming standards have a much smaller impact on the climate than those in other countries, Welsh meat farmers said. 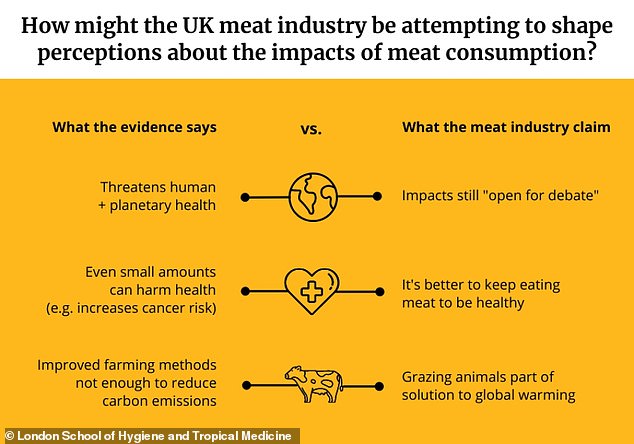 London School of Hygiene and Tropical Medicine researchers released a paper likening the meat industry’s PR tactics to those in ‘other harmful commodities’, including alcohol, tobacco and fossil fuels. Graphic shows: Claims made by the LSHTM paper about what scientific evidence shows about meat eating (left) compared to the public messaging from the meat industry (right) 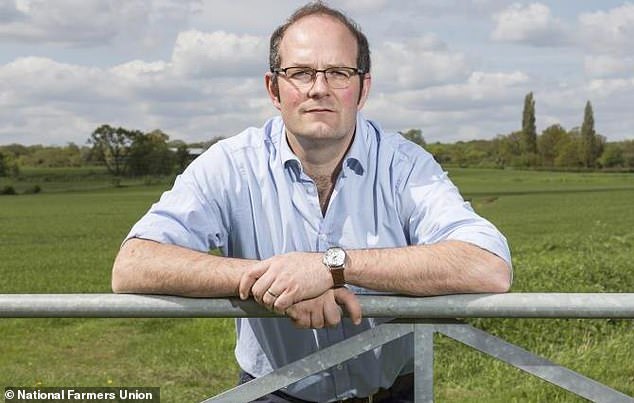 Meat is a good source of protein, vitamins and minerals in the diet.

The Department of Health advises that we eat no more than 70g (cooked weight) of red and processed meat a day, which is the average daily consumption in the UK.

A 2011 report called Iron and Health from the Scientific Advisory Committee on Nutrition (SACN) assessed evidence on the link between bowel cancer and iron – meat is the main source of iron.

SACN concluded that eating a lot of red and processed meat probably increases the risk of bowel cancer, and advised accordingly.

The American Institute for Cancer Research advises we consume no more than three portions of red meat a week and urges us to ‘avoid’ processed meats.

Processed meat often contains nitrogen-based preservatives that stop it going off while being transported or stored.

These preservatives have been linked to both bowel and stomach cancer.

When red meat is digested, the pigment haem gets broken down in our gut to form chemicals called N-nitroso compounds.

These compounds have been found to damage the DNA of cells that line our digestive tract, which could trigger cancer.

Our body may also react to this damage by making cells divide more rapidly to replace those that are lost.

This ‘extra’ cell division may increase the risk of cancer.

Cancer Research UK says three chemicals in meat are linked to bowel cancer because they damage cells in the gut.

Red and processed meat has also been linked to type 2 diabetes.

This may be due to the preservatives used or the meats’ higher levels of saturated fat than chicken and fish.

However, researchers in Canada, Spain and Poland cast a shadow over eating advice adopted by health organisations around the world in November 2019.

In a landmark paper, the academics analysed past studies of how eating meat affected the health of more than four million people.

The research, published in the journal Annals of Internal Medicine, found no evidence that eating beef, pork and lamb could increase the rates of heart disease, cancer, stroke or type 2 diabetes – despite fears.

The study, in the journal Food Policy, inspected 26 documents on the websites and other public health messaging written by six meat industry representative bodies.

The organisations were: the NFU, Agricultural and Horticultural Development Board, British Meat Processors Association, Country Land and Business Association, Craft Butchers, and Pasture for Life.

Analysis identified four over-arching themes in the messaging related to health and the environment — which the paper suggested were false.

The first was that the impact of meat on health and the environment is ‘still open for debate’.

Researchers claimed the meat industry argued there is a lack of scientific consensus on the issue, with advice arguing against meat coming from questionable sources.

Second, researchers said the documents suggested ‘most people have no need to worry’ about the effects of meat on their health.

Most suggested meat in moderation is safe and poses little danger to an individuals’ health, the researchers claimed.

Third, many of the documents claimed that eating meat was actually healthy, experts claimed.

And fourth, health messaging from meat manufacturers suggested there is ‘no need to cut down to be green’, according to the paper.

They said many of the papers claimed livestock farming occurs in places where non-meat agriculture is difficult, and is, therefore, a more efficient use of land.

The researchers claimed these four themes were not backed by wider research and amounted to diversionary tactics by meat producers to ‘counteract’ growing evidence.

Lead author Dr Kathryn Clare said: ‘There is growing evidence to suggest current consumption trends of red and processed meat are a threat to both human health and the health of the planet and this is increasingly being recognised in UK policy spheres.

‘Our findings suggest the meat industry may be using various frames that counteract this narrative.’

Researchers said the messaging is in line will a ‘well-thumbed playbook’ used by the alcohol, tobaccos and fossil fuel industries to divert attention from the dangers of their products.

Co-author Dr James Milner added: ‘These findings should act as a call to action for greater scrutiny of the industry, as addressing people’s appetite for meat will be crucial to efforts to avert climate breakdown and improve public health.’

Outraged farmers hit back at the claims however, suggesting that comparisons to those industries were unfair.

Tom Bradshaw, NFU deputy president, said scientific consensus in the meat industry is ‘more nuanced, complex and widely debated’ than in those other industries.

He told MailOnline: ‘This study makes a number of errors, particularly conflating and confusing UK and global standards of production.

‘How and where a product is produced is essential to understanding its sustainability.

‘To that point, the Climate Change Committee highlighted that emissions from UK beef production are less than half the global average and recognised the benefits of sustainable livestock systems.

‘It is reckless and unjustified for this study to compare the UK livestock sector with commodities such as tobacco and fossil fuels, where there is a very strong scientific consensus about harm to human health and the environment.’

Mr Bradshaw added: ‘It also ignores the naturally available nutritional benefits that red meat provides such as B12 and iron.

‘Arguments about diet and food production are much more nuanced, complex, and widely debated among scientists.’

A spokesperson from Hybu Cig Cymru (Meat Promotion Wales), which was not included in the study, told The Telegraph: ‘It makes no sense to compare meat, which has been an important nutritious part of people’s diet for millions of years, with harmful products with no nutritional value, like tobacco.

‘It’s widely recognised that meat in moderation can be a healthy part of a balanced diet, and independent scientific studies have shown that beef and lamb reared on non-intensive farms in these islands have a far lower emissions footprint than some of the bad environmental practices elsewhere in the world.’

Meals should be based on potatoes, bread, rice, pasta or other starchy carbohydrates, ideally wholegrain, according to the NHS

• Base meals on potatoes, bread, rice, pasta or other starchy carbohydrates, ideally wholegrain

• 30 grams of fibre a day: This is the same as eating all of the following: 5 portions of fruit and vegetables, 2 whole-wheat cereal biscuits, 2 thick slices of wholemeal bread and large baked potato with the skin on

• Eat some beans, pulses, fish, eggs, meat and other proteins (including 2 portions of fish every week, one of which should be oily)

• Choose unsaturated oils and spreads and consuming in small amounts

Just 18% of patients have their infected heart devices removed, even though removal is recommended
Health News 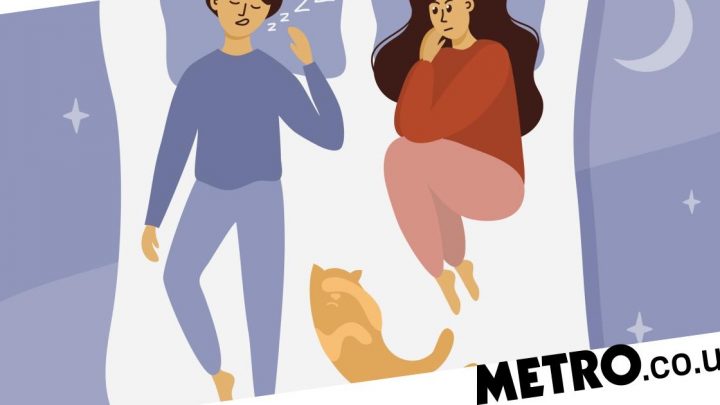