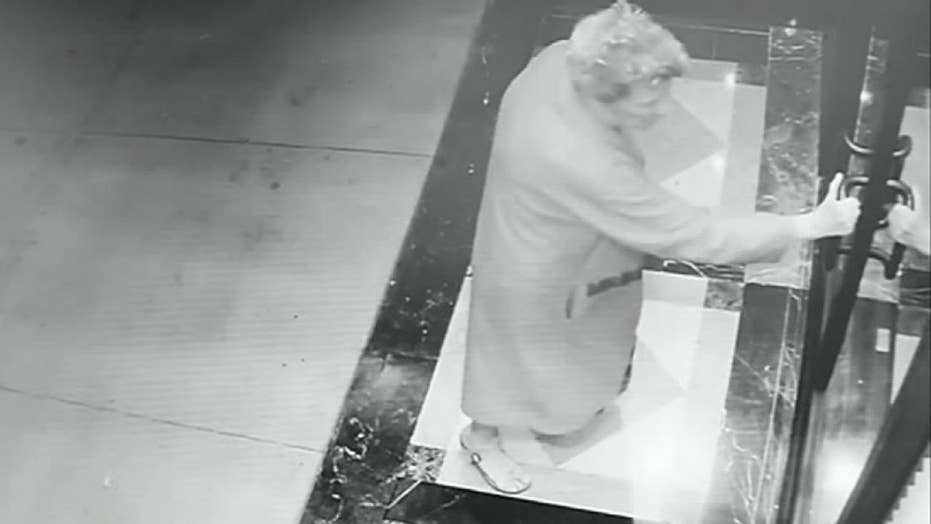 A California woman has filed a complaint with the state’s department of public health against a Long Beach hospital after surveillance footage showed her elderly mother, who suffers from dementia, alone and locked outside the care facility where she lives.

Earlier this month, Savina Genoese Zerbi, 84, received treatment at the College Medical Center in Long Beach after she allegedly threatened suicide and required a psychological evaluation. After she was discharged from the hospital, she was taken by taxi back to Regency Palms, where she now lives. Around 2:17 a.m. on Jan. 13, Zerbi — who was dressed only in a bathrobe and slippers — is seen in surveillance video attempting to open the facility's front door, which was locked. She then proceeds to bang on the door before walking into an alleyway near the facility before again returning to the door.

Zerbi was left outside the facility for an unknown period of time before she successfully made her way inside, though it’s not currently clear how she managed to enter the building, according to the Long Beach Press-Telegram, which first reported the news.

Following the incident, the woman’s daughter, Costanza Genoese Zerbi, filed a complaint with the California Department of Public Health against College Medical Center, accusing the hospital of negligence. She told the newspaper her mother was admitted to the hospital on Jan. 12 following alleged suicide threats. While awaiting results of her mother’s evaluation, Costanza told the Press-Telegram she went home to check on her children around 11 p.m.

Shortly after, the daughter said she received a call from a hospital clinician saying her mother could be discharged and the hospital would arrange for her transportation back to the care facility. Instead, however, the hospital placed Zerbi in a cab that ultimately left her at the facility alone, she claims. It’s not currently clear how the ride was paid for.

“I’m pretty outraged,” Costanza, 51, told the Press-Telegram. “She could have been killed or kidnapped.”

In a statement to The Associated Press, the hospital claimed Zerbi refused help to get home.

The hospital claims it also offered to meet with Zerbi’s family “to discuss this matter in further detail” but without “admitting any wrongdoing.”

After seeing the hospital’s statement on the matter, Costanza said she would refuse to attend, calling the meeting a “media play.” She said the hospital should not have listened to her mother because she had been deemed unfit to make her own decisions by her doctors, which she said she could prove in writing.

When contacted by the Press-Telegram, state health officials declined to comment on the complaint but said it “investigates all complaints or facility-reported incidents which may violate any state law or regulation within CDPH’s authority to enforce.”

The Associated Press contributed to this report.

What happens to the body in extreme cold?