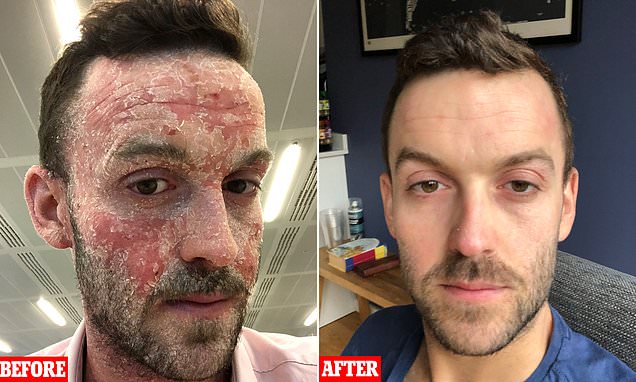 An eczema-stricken man has revealed photos of the dramatic transformation his skin has gone through since he ditched the steroid medication he was ‘addicted’ to for years.

Jonathan Rowe, 32, from London, saw a tiny patch of eczema at 18 develop into a full-body rash by the age of 24 and end up ‘controlling his life’.

The associate director of a bank was prescribed a strong steroid cream each time he saw the doctor, as well as being given oral steroids and immunosuppressants.

Although the strong drugs cleared his symptoms, Mr Rowe knew he couldn’t use the medication forever because of its potential side effects.

There is debate among medics about whether the condition – causing exacerbated eczema when steroid medication is stopped – is ‘real’. However, Mr Rowe was certain that was what he was suffering from.

In a bid to rid his eczema for good, Mr Rowe stopped using steroid treatments all together in April 2018, and then in January 2019 he began ‘no moisture therapy (NMT)’.

The idea of NMT is that it dries out the skin and allow it to create its own moisture again. Now, Mr Rowe says his skin ‘has never been better’. 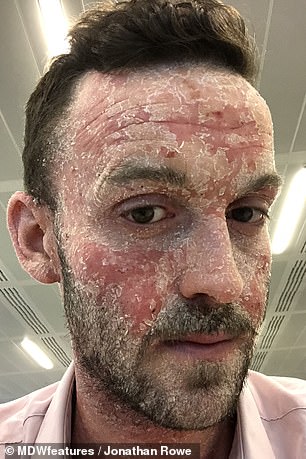 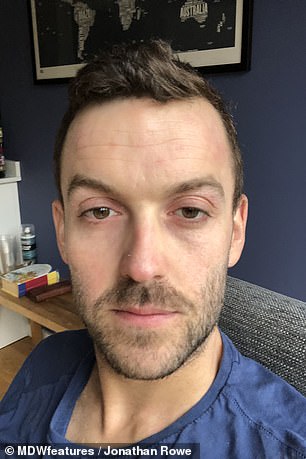 Eczema-stricken Jonathan Rowe, 32, has revealed shocking transformation pictures after ditching steroid medication he was ‘addicted’ to for years

Mr Rowe said: ‘I first developed eczema when I was 18 at Leeds University, which was only a small rash on my face.

‘I visited the doctor who gave me a mild topical steroid cream. I used this and it would clear and then come back slightly worse over time. The problem was that it was never managed for a long period of time.’

At the age of 24, Mr Rowe was given the oral steroid prednisolone, which helped his eczema to clear.

‘But when I stopped taking it the eczema came back even worse,’ he said.

‘By then, my eczema was on my full body, face, neck, back, arms and legs. It was pretty uncomfortable, and it was seriously controlling my life as I would take a lot of time off work.’

Mr Rowe was then put on cyclosporine, an oral immunosuppressant that weakens the immune system. It’s typically used for rheumatoid arthritis (RA) and severe psoriasis.

The drug has drawbacks because it can increase the risk of serious infections, skin cancer, kidney disease and liver failure.

Mr Rowe said: ‘I was worried about the possible side effects of cyclosporine, and I had to have regular blood tests to check my liver and kidneys.

‘I really thought a 24-year-old shouldn’t be having this to control their skin. I realised I couldn’t stay on them forever. 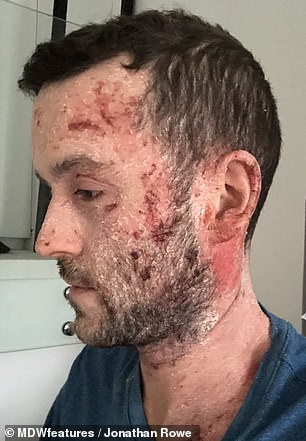 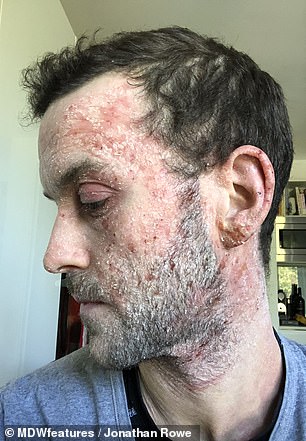 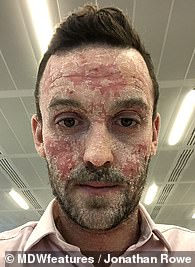 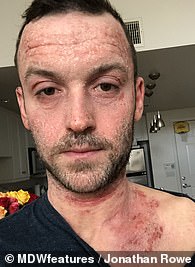 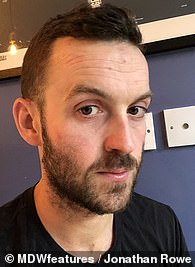 Mr Rowe was taking a drug called cyclosporine which weakens the immune system to try and stop the body shedding skin so excessively.  Each time he stopped using the cream his eczema would come back worse, so he decided to push through the withdrawal symptoms and stop using it completely. He now says his skin is better than ever

‘I was the one who pushed to come off as I wasn’t comfortable taking it due to the possible side effects. I was told there was a risk of getting cancer from this medication.

‘I was never completely clear during this period, but it did make things more manageable for a couple of years.’

After two years on cyclosporine, Mr Rowe came off and decided to try Protopic – a last-ditch effort to heal his inflamed skin.

Protopic works in a similar fashion to cyclosporine, weakening the skin’s defense system and thereby decreasing the reaction to allergens.

The cream would burn Mr Rowe’s skin for 12 hours but then the area of eczema would be cleared for a short while. But it would always come back after a few days.

Mr Rowe said: ‘I did find the severity of my eczema just carried on getting worse and any amount of cream I applied made no difference and my skin was out of control.’

TSW is thought to occur when steroids have been abruptly discontinued after a prolonged or inappropriate length of administration. 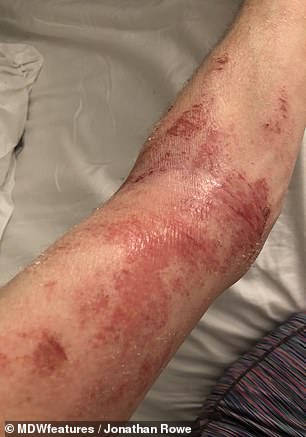 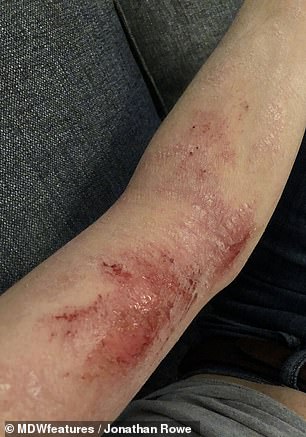 Mr Rowe’s eczema covered his entire body, face, neck, back, arms and legs and he said: ‘It was pretty uncomfortable, and it was seriously controlling my life as I would take a lot of time off work’. The skin on his arm is less red and inflamed now (right) since he stopped using the steroids 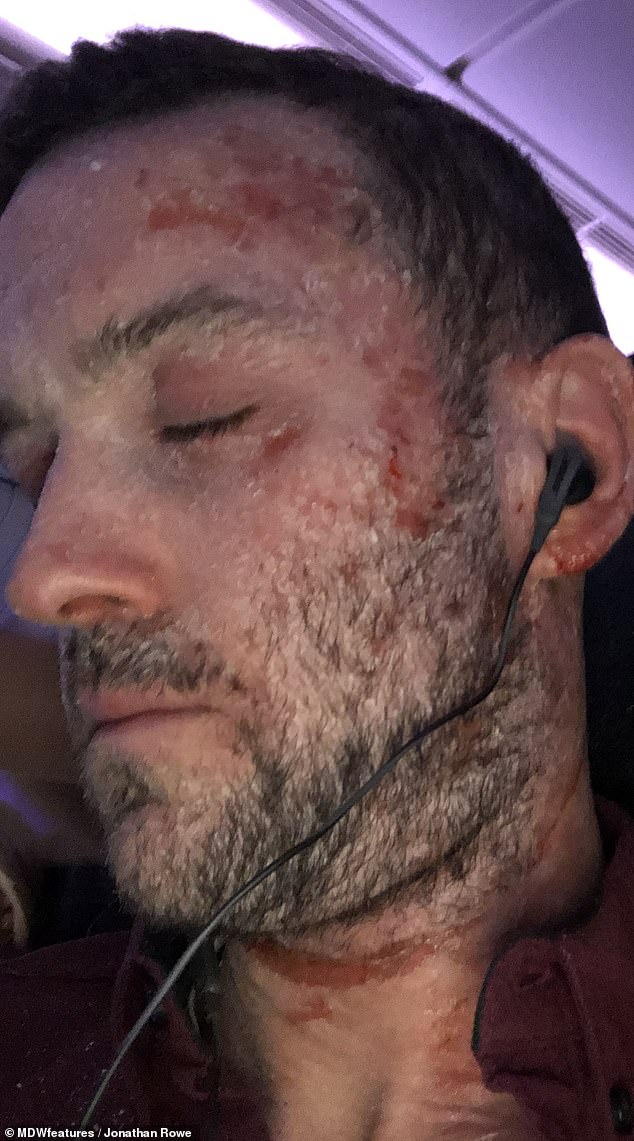 The steroid cream Mr Rowe used would burn his skin for 12 hours but then the area of eczema would be cleared for a short while. But it would always come back after a few days (pictured) 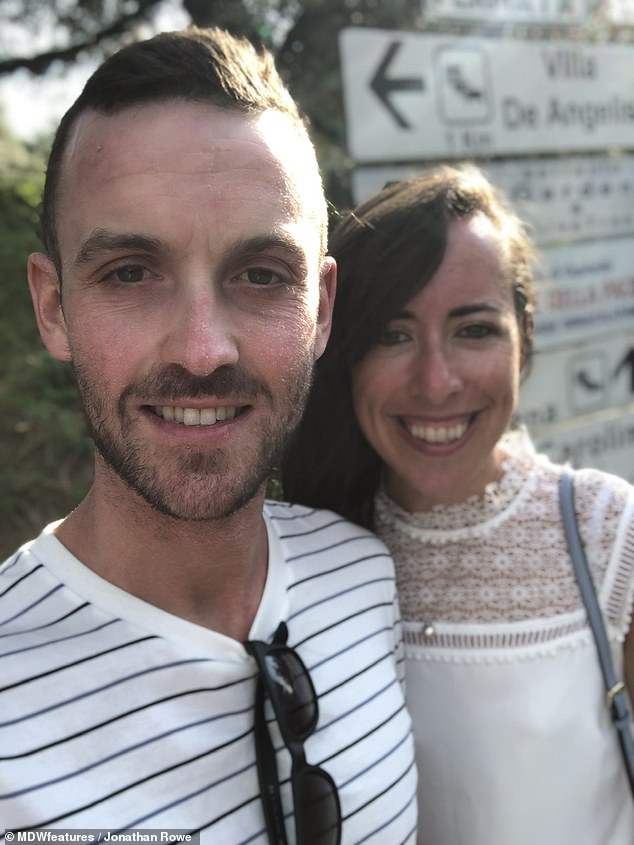 In January 2019, Mr Rowe (pictured recently with his wife Leslie) began ‘no moisture therapy (NMT)’. The idea of this is to dry out the skin and allow it to create its own moisture again

Mr Rowe said: ‘I realised I was addicted to steroids and Protopic and if I stopped using the creams then my skin would flare out of control.

Mr Rowe went to see a consultant dermatologist about his finding, hoping to discuss ways he could help heal his skin naturally.

‘They said topical steroid addiction was not a real thing and I should carry on with the steroids.

‘I told him that I’d been researching TSW and I disagreed with him so I wouldn’t be following his treatment recommendation.

‘I just felt disappointed that he was so closed minded and he couldn’t even see it as a possibility.

‘There could be thousands of other people with this, but the dermatologists don’t think it’s a real thing. I had a mentality that I was going to show him that I could get better without the creams.’ 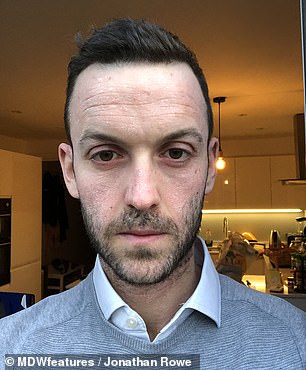 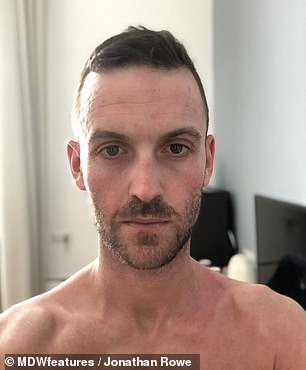 Three and a half months into the no moisture therapy, Mr Rowe saw a noticeable difference in how clear his skin was (left). He now says dermatologists are reluctant to believe topical steroid withdrawal is real and as a result ‘thousands of other people’ could be trapped on the medications

When Mr Rowe first stopped using the creams he had been addicted to, he saw little to no improvement for eight months.

He then came across the research of a Japanese doctor called Dr Kenji Sato , who uses NMT to help patients come off steroid creams.

There is only anecdotal evidence of it’s effects.

‘I drink a maximum of one litre of water a day, no moisturiser, I limit showers to one per week for two minutes, no baths, no water after seven pm, and I eat more protein to counteract the loss of protein.

‘I never apply anything to my skin anymore, especially not moisturiser.

‘I believe that topical steroids and Protopic cause the eczema and it’s totally preventable.’

It has been estimated that up to 15million people in the UK could be living with eczema, according to Allergy UK.

Mr Rowe said: ‘Prior to steroids being created in the fifties, very few adults had eczema but now millions have it.

‘When people go to the doctors with eczema, they shouldn’t be given topical steroids but try to understand what has caused it, such as diet, stress or environment.

‘My skin has never been better than it is now and it does not affect me in my daily life.’

Many have called topical steroid withdrawal a fad, however, it has been recognised by the National Eczema Association since 2013.

Also known as red skin syndrome, the disorder does not have many statistics to show how common it is.

One 2003 study from Japan, found that 12 per cent of adults who were taking steroids to treat dermatitis developed RSS.

The British Association of Dermatologists accept that doctors still do not recognise this condition.

BAD spokesman, Dr Anton Alexandroff, said: ‘In rare circumstances, overuse of strong steroid can lead to thinning of the skin. This overuse doesn’t make the eczema worse, but it can sometimes trigger an acne-like problem, particularly on the face, which then flares up when steroids are stopped.

‘Some people refer to this as steroid withdrawal or steroid addiction, however, this isn’t something that is formally recognised by dermatologists.

‘The differing opinions come down to whether this skin reaction is caused by stopping steroid treatment, or by a flare-up of the underlying disease because the treatment has stopped suddenly. Dermatologists believe it is the latter.’

Symptoms of TSW include:

Excessive sweating and itching is a sign of recovery.  Many sufferers also develop insomnia.