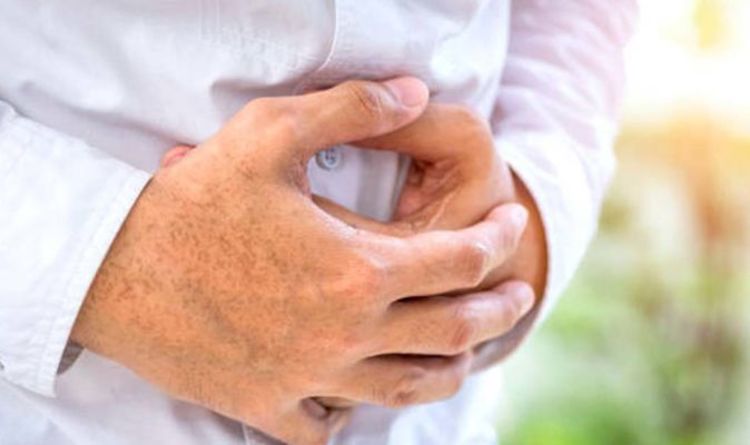 The number of people dying of bowel cancer has been falling since the 1970s, so early diagnosis and getting treatment is key. It is very important to get cancer spotted early, as this can help immensely. Indeed, Bowel Cancer UK says bowel cancer is treatable and curable “especially if diagnosed early”. Sadly, survival rates drop as the disease develops, so the charity says “early diagnosis really does save lives”.

The NHS notes that in some cases, bowel cancer can stop digestive waste passing through the bowel, which is known as a bowel obstruction.

It says that symptoms of a bowel obstruction can include “constant swelling of the tummy” which will come with abdominal pain.

There are also several other signs. Some people find that they have intermittent, and occasionally severe, abdominal pain, which is always brought on by eating.

The NHS notes that other signs include unintentional weight loss and being sick with constant abdominal swelling.

The health body warns: “A bowel obstruction is a medical emergency. If you suspect your bowel is obstructed go to the accident and emergency (A&E) department of your nearest hospital.”

The bowel is part of the digestive system, which is necessary for breaking down food and moving undigested waste along towards the rectum to be excreted from the body. Unsurprisingly, many symptoms can show up when you go to the toilet.

In both men and women, symptoms can include blood in your poo or a change in your normal bowel habit.These might be looser poo, pooing more often, or constipation.

The NHS explains: “When you first see a GP, they’ll ask about your symptoms and whether you have a family history of bowel cancer.”

According to the health body, your GP may carry out a number of tests.

“They’ll usually carry out a simple examination of your bottom, known as a digital rectal examination (DRE), and examine your tummy (abdomen).”

Bowel Cancer UK notes that over 42,000 people are diagnosed with bowel cancer every year in the UK.

The charity says that one in 15 men and one in 18 women will be diagnosed with bowel cancer during their lifetime.

The charity says: “If you have any symptoms, don’t be embarrassed and don’t ignore them. Doctors are used to seeing lots of people with bowel problems.”

Cancer Research says: “See your GP if you are worried about any symptoms that you think could be caused by cancer in the bowel.”

Although it can be difficult to research the link between diet and cancer, studies have shown certain foods can definitely affect the risk of bowel cancer.

Processed meat is any meat that has been treated to preserve it and/or add flavour – for example, bacon, salami, sausages, canned meat, or chicken nuggets.

The Government recommends that people eating more than 90g of red and processed meat a day should reduce it to 70g or less.

According to Cancer Research UK, a linked risk factor is obesity. “It is estimated that 11 out of 100 bowel cancers (11 percent) in the UK are linked to being overweight or obese.”

The NHS adds: “There’s also evidence that suggests a diet high in fibre could help reduce your bowel cancer risk.”

Adding a P2Y12 inhibitor does not improve outcomes in COVID-19

Sotomayor, Gorsuch Deny Report They Were at Odds Over Masks
Health News