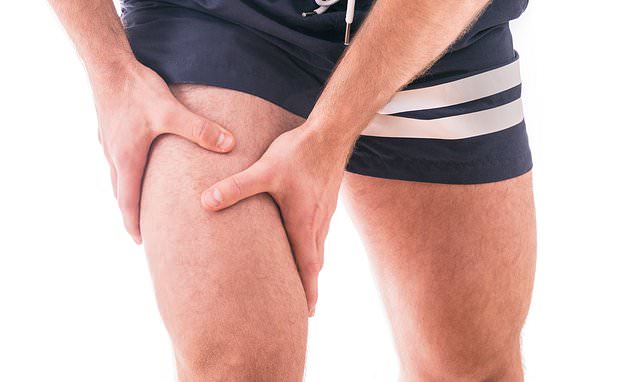 Ten weeks ago, while playing tennis, I injured my thigh, specifically the quad muscle. An ultrasound suggested I’d ruptured a tendon and I now have a visible bulge on the front of my thigh. I’m not generally in pain, so my doctor said they wouldn’t operate. But I’m worried that, should I start playing tennis again, I’ll do myself further injury.

The quad, or quadriceps, muscles are the large muscles making up the bulk of the front of the thigh, reaching from the hip down to the knee cap.

These muscles are actively involved in the movement of the knee known as extension – straightening the knee. So they are crucial to walking, running, squatting and jumping. 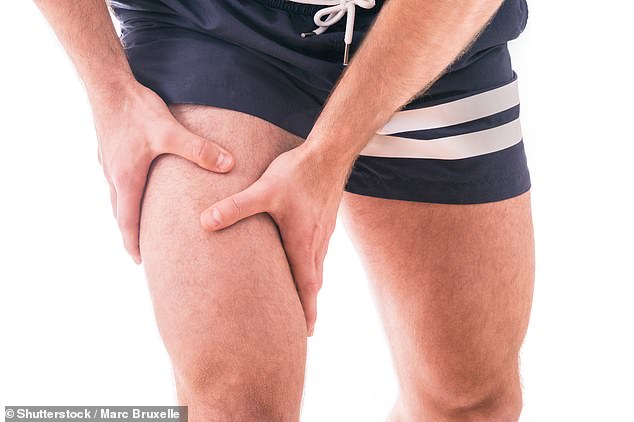 The quad, or quadriceps, muscles are the large muscles making up the bulk of the front of the thigh, reaching from the hip down to the knee cap

Well-functioning quads are vital for active sports such as badminton and tennis, and are put through their paces strenuously by playing.

A tendon is the band of tissue that connects a muscle to a bone. In the case of the quadriceps, it connects the quads to the kneecap – the patella.

A tendon tear most commonly occurs in sports during running or jumping, and is common in the over-40s. Treatment falls into either surgery or non-operative methods.

Non-surgical treatment is not simply a watch-and-wait approach, but involves active treatment.

This would comprise physiotherapy to restore the function of the knee and quads, typically over 12 to 16 weeks as you build up strength and movement. A brace can be used to immobilise the knee, allowing healing, alongside crutches to take weight and pressure off the joint. A GP should be able to advise on a rehabilitation programme.

The tendon will fully heal but it could take four or five months, and with a slow and steady start, returning to sport should not be a concern.

I have recently begun to suffer slight incontinence – and not of the urinary kind. I’m a man of 86 and find this distressing. My GP ordered tests in hospital but nothing was found. I’m on zopiclone and Circadin, to help me sleep, and an antidepressant, mirtazapine. Could coming off these help?

Incontinence of any kind is terribly difficult to deal with as it is very stigmatising and terribly inconvenient. But it is imperative to seek proper investigation of the cause.

Bowel incontinence does not occur spontaneously or with ageing, but can be associated with a number of serious conditions, including inflammatory bowel diseases such as Crohn’s, or cancer in the anus or rectum. Incontinence can also result from a change in bowel habit to looser stool. Again this should be investigated to rule out cancer.

It’s incredibly common for many drugs to affect the gut and this is known with antidepressants. But of course stopping medications which are working well has risks which have to be weighed up. A GP can advise on stopping them one at a time, and safely, as some may need weaning down. This would be a valuable approach if serious conditions have been ruled out.

The Bowel and Bladder Foundation is an excellent source of advice for anyone suffering incontinence.

The pros and cons of hormone replacement therapy (HRT) continue to be debated, as new studies published last week confirm that the risks can depend on how the medication is taken. HRT is most commonly given as pills but may also be in the form of patches or gels. Many women don’t like a patch, and find gels messy to use. But research shows they are associated with no increased risk of blood clots, unlike tablets. This risk is very small, but women should be offered the safer choice first.

… And is it really now game over for our Andy?

I don’t blame Andy Murray for weeping as he spoke last week about how debilitating hip pain – so bad he is sometimes unable to put on his shoes and socks – has cut short his tennis career at 31. He is now considering further surgery to improve his quality of life. 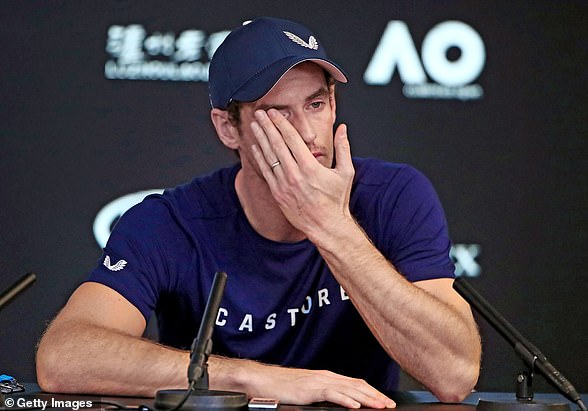 The good news is that Andy has every chance of finding an end to the agony. Joint surgery can be transformative, especially if a patient is in good shape. Many patients who have had a hip or knee op and, while not contenders for Wimbledon, will enjoy a regular knockabout on court.

Digestive and toxic spinach: These nutrition myths you must not forget to quietly
Health News