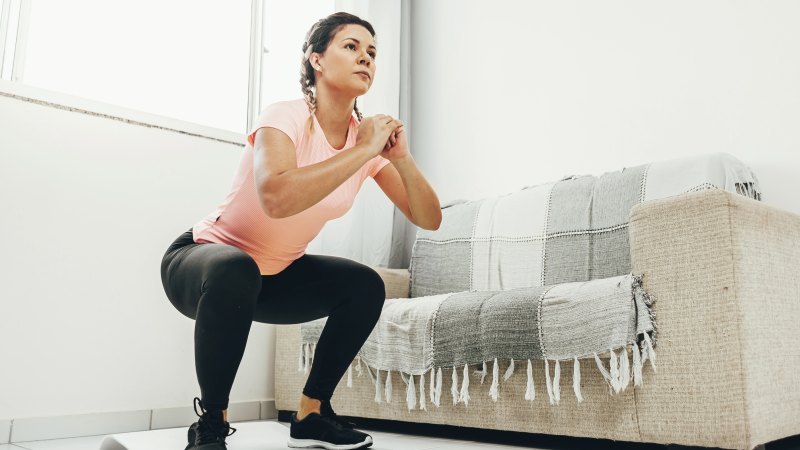 Five minutes of burpees, jump squats and other calisthenics significantly improve aerobic endurance, according to one of the first randomised, controlled trials to test the effects of brief body weight workouts. The study's findings are predictable but provide reassurance that simple workouts will work, physiologically, and our burpees will not be in vain.

Last year, when the pandemic curtailed traditional gym hours and left many people hesitant to exercise outside on crowded paths, quite a few of us moved our workouts indoors, into our living rooms or basements, altering how we exercise. Many started practising some version of a body-weight routine, using calisthenics and other simple strength-training exercises that rely on our body weight to provide resistance. 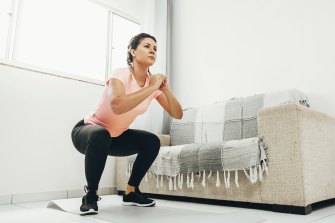 With just a little bit of space at home, you can do this short workout.Credit:iStock

Body-weight training has been a staple of exercise since almost time immemorial, of course. Usually organised as multiple, familiar calisthenics performed one after another, this type of exercise has gone by various names, from Swedish Exercises a century ago to the Royal Canadian Air Force’s Five Basic Exercises (5BX) program in the 1960s to today's Scientific 7-Minute Workout and its variations.

In general, one of the hallmarks of these programs is that you perform the exercises consecutively but not continuously; you complete multiple repetitions of one exercise, pause and recover, then move on to the next. This makes the workouts a form of interval training, with bursts of intense exertion followed by brief periods of rest.

Traditional interval training has scientific backing, with piles of research showing that a few minutes — or even seconds — of strenuous intervals, repeated, can raise aerobic fitness substantially. But the exercise in these studies usually has involved stationary cycling or running.

Few experiments have examined the effects of brief body-weight workouts on endurance and strength, and those few had drawbacks. Most focused on people who already were fit, and almost none met the scientific gold standard of being randomised and including an inactive control group. Consequently, our faith in the benefits of short body-weight training may have been understandable, but evidence was lacking.

So, for the new study, which was published this month in The International Journal of Exercise Science, researchers at McMaster University in Hamilton, Ontario, and the Mayo Clinic in Rochester, Minnesota, decided to develop and test a basic body-weight routine. They modelled their version on the well-known 5BX program, which once had been used to train members of the Canadian military in remote posts. But the researchers swapped out elements from the original, which had included exercises like old-fashioned situps that are not considered particularly good for the back or effective in building endurance.

They wound up with a program that alternated one minute of calisthenics, including modified burpees (omitting the pushups that some enthusiasts tack onto the move) and running in place, with a minute of walking, also in place. The routine required no equipment, little space and a grand total of 11 minutes, including a minute for warming up and cooling down.

They then recruited 20 healthy but out-of-shape young men and women, measured their current fitness, leg power and handgrip strength and randomly assigned half to start practising the new program three times a week, while the others continued with their normal lives, as a control.

The exercisers were asked to "challenge" themselves during the calisthenics, completing as many of each exercise as they could in a minute, before walking in place, and then moving to the next exercise.

After six weeks, all of the volunteers returned to the lab for follow-up testing. And, to no one's surprise, the exercisers were more fit, having upped their endurance by about 7 per cent, on average. Their leg power had also grown slightly. The control group's fitness and strength remained unchanged.

"It was good to see our expectations confirmed," said Martin Gibala, a professor of kinesiology at McMaster University, who oversaw the new study and, with collaborators, has published influential studies of intense interval training in the past.

"It seemed obvious", he said, that this kind of training should be effective. "[But] we now have evidence [that brief, basic body-weight training] can make a meaningful difference [in fitness]", he said.

The study was small and quite short-term, though, and looked at the effects only among healthy young people who are capable of performing burpees and jump squats. Some people may need to substitute some of the exercises, Gibala said, especially anyone who has problems with joint pain or balance. (See the Standing 7-Minute Workout for examples of appropriate replacements, in that case.)

But whatever mix of calisthenics you settle on, the key is to push yourself a bit during each one-minute interval, he said.

Here is the full 11-minute workout used in the study, with one minute for each step:

— Easy jumping jacks, to warm up.

— Split squat jumps (starting and ending in the lunge position, while alternating which leg lands forward).

— Walking in place, to cool down.

Get a little more outta life

Start your week with practical tips and expert advice to help you make the most of your personal health, relationships, fitness and nutrition. Sign up to our Live Well newsletter sent every Monday.

Most Viewed in Lifestyle