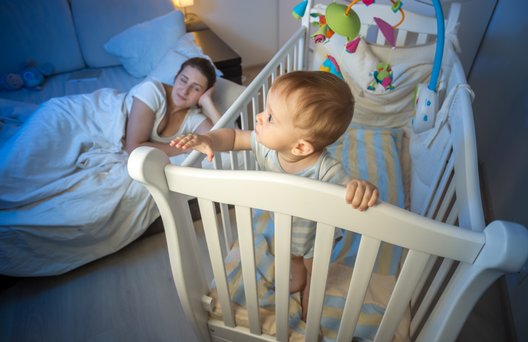 For many parents of young babies, it’s often the million dollar question, how can I get him or her to sleep through the night?

It turns out, you’re not doing anything wrong, and it’s completely normal.

In fact, if you’re baby doesn’t sleep through the night, it might actually be a good thing.

Professor Peter Fleming who specialises in developmental psychology at the University of Bristol told Buzzfeed that babies are not designed to sleep for long periods, and it’s normal for them to wake.

“It’s not good for them, and there is absolutely no evidence whatsoever that there is any benefit to anybody from having a child that sleeps longer and consistently.

“That’s not perhaps what most parents would like to hear.”

Typically babies sleep during the day and want to be awake the most from 6pm to midnight.

Professor Fleming explains that there’s a very clever reason why babies wake through the night.

“Biologically that’s a big advantage because they will have more attention from their two primary caregivers at that time of day than at any other, because there are fewer distractions.

“From a biological point of view what the baby is doing is completely normal and sensible. It just doesn’t fit in with our 21st-century expectations.”

Professor Fleming makes the connection between very high levels of developmental and intellectual achievement and not sleeping throughout the night.

Since time immemorial, he explains, babies have never slept through the night.

“If we go back to evolutionary history of humans, babies spent all their time in close and continual contact with their mum, they get carried around everywhere.

“If the baby is constantly with mum, the idea that they need to sleep for long periods of time doesn’t really arise. In most parts of the world and most infants on this planet, that is still the case.”

Professor Fleming says biological sleep patterns can’t suddenly be changed just because the modern world operates to a different schedule than humans did thousands of years ago.

Fleming said: “One needs to remember that society changes faster than biology. A biological pattern that’s taken half a million years to develop can’t just be suddenly ignored and turned around. Particularly when there’s no advantage in doing so.”

There is evidence to show a higher risk of sudden infant death syndrome among babies that are kept in separate rooms, he says.

And co-sleeping – a parent sleeping beside their baby – is the option that the majority of parents across the world choose.

“The idea that sharing a sleep surface with your baby is in anyway wrong, abnormal or peculiar is just nonsense,” he says. “Most people in the world would see that view as bizarre – 90pc of the human infants on this planet sleep that way every night and over the half a million years of human evolution that’s been the norm.”