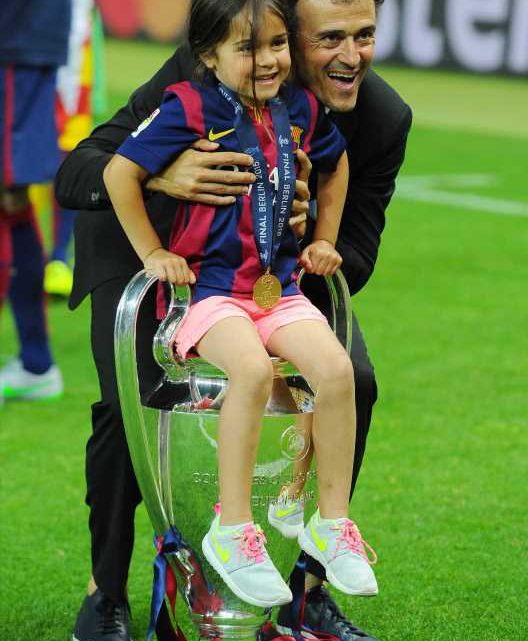 Luis Enrique is mourning the death of his 9-year-old daughter Xana.

“Our daughter Xana has passed away this afternoon at the age of 9, after fighting for five months against osteosarcoma,” the statement began, in Spanish. “We give thanks for all the caring gestures we have received during these months and we appreciate the privacy and understanding. We also thank the staff, doctors, nurses, and the volunteers at the Sant Joan de Deu and Sant Pau hospitals for their dedication and care. And a special mention to the palliative care team at Sant Joan de Deu.”

The statement concluded with a heartbreaking message for Xana: “We will miss you a lot but we will remember you every day of our lives with the hope that we will see each other soon in the future. You will be the star that guides our family.”

Rob Delaney Reveals His 2-Year-Old Son Has Died of Brain Cancer: ‘I Will Endeavor Not to Go Mad with Grief’

Many in the world of professional soccer expressed their condolences to Enrique, whose career included head coaching gigs for FC Barcelona and the Spanish national team.

“All of our support and compassion goes to @luisenrique21, his wife and all of his family at this particularly painful time,” tweeted FC Barcelona president Josep Maria Bartomeu. “All the Barça family are touched by the loss of Xana. Our condolences and all our sympathy for the Martínez Cullell family.”

On the Spain national team’s account, a tweet read in Spanish, “One day we achieved our star (presumably meaning the World Cup), and from today, we have another one that enlightens us from heaven with its light.”

“Rest in peace, little Xana. The Spanish FA joins in the grief of the Martinez Cullell family and we share the gratitude for its admirable example of love and strength,” the tweet concluded.

“There are no words that that can go along with this pain,” tweeted the Prime Minister of Spain, Pedro Sánchez. “My heartfelt wishes to Luis Enrique and all his family, after the loss of his little Xana.”

Enrique left his head-coaching post with Spain in June, following a three-month leave of absence for personal reasons, ESPN reported. He had initially signed on with the national team the previous July.

“We have to thank Luis Enrique. We’ve learned a lot from him,” Luis Rubiales, president of the Spanish Football Federation, said in a news conference at the time, according to ESPN. “We will continue to support him. He will always have the doors open in this federation. I ask the press to continue to respect him during this difficult time which is down to a personal issue.”