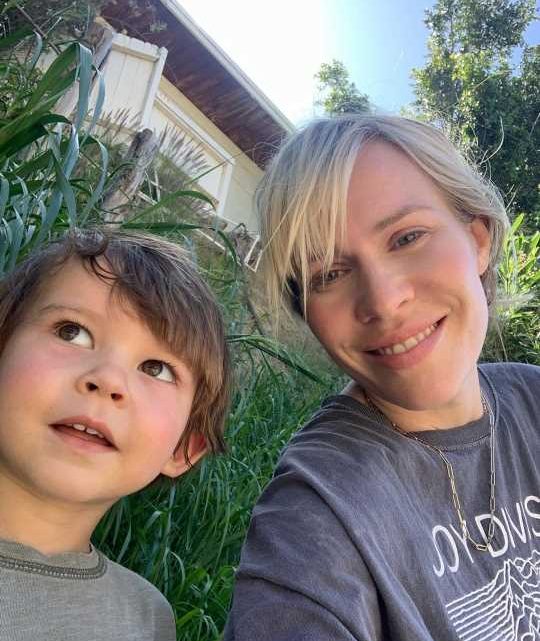 Natasha Bedingfield is finally able to enjoy time at home with her family, but that isn't keeping her from getting new music out.

During the pandemic, the singer-songwriter has been with her husband of 10 years, Matt Robinson, and their 2½-year old son, Solomon, at their home in Los Angeles.

The singer — whose new uplifting song "Together in This" is out Friday — says the family got a head start in prepping for this time after spending five weeks wearing masks in a hospital at the end of last year when Solomon underwent multiple surgeries for an infection in his brain.

"We have a unique experience because we were in the hospital just two months before COVID because Solo had a brain abscess and had to have some surgeries," she tells PEOPLE exclusively. "He's completely recovered now, but we spent a whole five weeks in a tiny little hospital room wearing masks, so we kind of got a head start on what everyone's going through."

"Feeling gutted but also thank God that we live in a time of MRI where we are able to see into our own minds and for doctors who are wise enough to keep asking questions," she wrote at the time. "He has an area of infection that somehow found its way into the brain. We are so grateful though that there is treatment for what Solo is experiencing and it is straight forward and has worked many times.

"It's actually quite nice to be at home as a family, with our son really healthy," Bedingfield says. "Shout-out to Children's Hospital Los Angeles. We have such an appreciation for both medical health professionals and the length that they go to help people be healthy. For us, they actually literally saved our son's life."

The mom says she couldn't be more appreciative of the quality time she's able to have with him amid the pandemic, doing normal activities like playing games in their yard.

"I'm just really enjoying my son and even if he's difficult and going through the 'terrible twos' and stuff, I'm just grateful for it because of what I've just been through," she says. "I just keep reminding myself if it gets frustrating, I'm glad to be feeling frustrated, glad for the luxury of that."

Bedingfield reveals Solomon loves having her sing to him and is even joining in himself. "He's very creative in every way, and I think kids are because it's so natural, especially if they have access to it," she says. "He's grown up around me doing music. I think he thinks every mum does it because it's so normal for him." The Grammy-nominated singer's new song, off the Jungle Beat: The Movie soundtrack, is an upbeat track inspired by the film’s themes of togetherness and friendship. But according to Bedingfield, it's also a reflection of the current state of the world.

"We're all divided right now, but I think that we are finding ways to unite, even if you think about the protests, and I feel like people are finding what's important to them and uniting on causes that matter," she says. "Some people are separated from their families and they're having to find creative ways to connect with them."

"Part of the song feels like it relates to me because it's basically in that time of my greatest need that so many of my friends rushed around me in such a supportive way," she adds.

RELATED: Natasha Bedingfield on How Being a Mom Has Changed Her and Her Music: 'I'm a Bit More Ballsy'

"Together in This" was written by Bedingfield's friend Jonas Myrin, who is also quarantining with her family, and the artist couldn't have been more excited to soundtrack an animated film that her son can enjoy.

"I've been trying to find ways to keep my child entertained without him being able to play with other kids," she reveals. "So finding movies or TV shows that I know have good messages and the whole family can watch is really something that's like gold. Right now your kids are getting educated a lot more on screen than probably you would even want, but it's just necessary."

Jungle Beat: The Movie is the first film for the popular animated video franchise, which is broadcast in over 200 countries. Bedingfield touts her son is one of the show's many young fans, saying, "He's just at that age where you can just see the delight on his face when he sees a character that he loves in the cartoons in a big way."

Bedingfield's signature hit, 2005's "Unwritten," celebrates its 15th anniversary this year — and the singer says she's blown away by how quickly time has flown by.

"It's crazy because I feel like I'm that same 22-year-old and I feel like it was just yesterday when I wrote it," she reminisces. "It's a bit trippy when I see people who were kids when it came out and they look like they're the same age as me, and they're like, 'Oh, that was the song I grew up with.'"

"When it comes on the radio, I just feel like I'm in a music video," Bedingfield adds. "Especially if I'm in a store or something, and I just kind of walk like I'm suddenly on a catwalk. I love how a song has a journey that goes beyond the room that you wrote it in and I love hearing people's stories of what the song means to them."